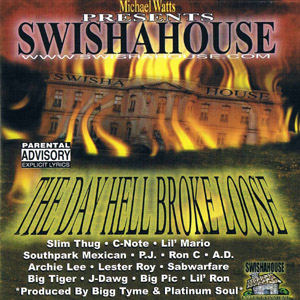 In 1999 Swishahouse was still bubbling deep in the underground from a national perspective but a big step towards greater recognition was made with the first proper retail release whose title already suggested a significant event taking place – “The Day Hell Broke Loose.” Conceived around 1997, Swishahouse (or Swisha House) began as a platform for DJ’s and MC’s from Houston’s Northside, modeled after the support system DJ Screw had established for the Southside in the first half of the decade. DJ’s Michael Watts and Ron C released a slew of mixtapes/CDs and began to feature local rappers on them, mainly in Screw’s trademark ‘screwed and chopped’ fashion.

“The Day Hell Broke Loose” played at regular speed but featured many of the rappers that had made a name for themselves with tape appearances. A number of them originated from the Acres Home area (Big Pic, Lil’ Mario, PJ, Sabwarfare, 50/50 Twin, J-Dawg) and some were still in their teens, notably the CD’s forerunners Lil’ Mario and Slim Thug. Production was handled by Randy ‘Bigg Tyme’ Jefferson, who had previously worked with another Northside crew, Trinity Garden Cartel, and Wreckshop Records producers Double D and Noke D a/k/a Platinum Soul. Guests were few and far between (South Park Mexican, C-Note, Billy Cook). The prominently featured Archie Lee had been heard alongside Lil’ Keke before, but the other vocalists more or less made their official entry into the music business with “The Day Hell Broke Loose.”

Seven of them give it their best to raise hell on the first proper song, the title track. Shouting aggressively over a slow, menacing groove underpinned by martial but sophisticated percussion, the rappers sound dead serious on this No Limit-inspired sonic attack, even as boasts like “Swishahouse, bitch, number one, we on top” were still wishful thinking. The CD quickly kicks into a much more relaxed mode with the next track, “Playa Made,” a funked out back-and-forth between Lil’ Ron and Slim Thug (effectively assisted by singer Billy Cook):

See, it’s that syrup/Sprite sipper that’s allergic to clippers
I own 16 strippers that love to unzip zippers
Drop-top SLAB flipper, cherry woodgrain gripper
Ya got mo’ stars that they got in the Big Dipper”

Then it’s back to the gangster grooves with “Big Ballin’, Shot Callin’,” which is built on Dr. Dre’s interpolation of a Temptations bassline he used as the intro for “Eazy-Duz-It” way back when. The mood switches again with “Can’t Stop From Ballin’,” where C-Note of the Botany Boyz bridges the gap between South- and Northside in his verse while Lil’ Mario reminds us of the competitive climate in the Houston scene:

“Remember me, puttin’ it down on them freestyle tapes?
Young player wrecked so hard, put a frown on them boys’ face
Worldwide agenda, still gettin’ up in ya
One-on-one with Lil’ ‘Yo – bring another contender
It don’t matter the gender, whether summer or winter
Nigga, I’m on a trip to Spain with intercontinental
Bladed up and we choppin’, H-Town ain’t stoppin’
And like the 5th Ward Boyz, baby, we Keepin’ it Poppin'”

Moreso than unleashing demons, “The Day Hell Broke Loose” showcased solid rapping talent cutting its teeth with traditional subject matter. The ‘Fat Albert’ theme serves as an inspiration for the smoke session “Hay Hay Hay,” singer Lashonda Alexander frames the love song “Peep the Picture,” “Ghetto in the Sky” is a sincere farewell to the fallen, and “Still Thuggin” and “Down South G’s” are as customary as their titles.

“Boppin Bitches” and “Fuck Sumtin, Suck Sumtin” suggest at least mild misogyny, and while there’s some of that, Big Tiger isn’t above showing respect to independent women on the former and is (like the rest of the gang) busy representing and showing off on the latter:

“Make them boys feel how we do it down south
Piece and chains on swang with a grill in our mouth
I’m down with the ‘Southside, the Southside’ like Keke
Or represent the Northside like that KB
I got a Diary like Scarface’s
And when I leave out the club I’m makin’ Fuck Faces”

Houston had a thriving rap scene in the ’90s with Rap-A-Lot, Suave House, Dope House, the South Park Coalition and DJ Screw and his Screwed Up Click making history. At that point Swishahouse was merely an up-and-coming player, some say a blatant copy of the S.U.C. But skip a few years ahead and the House is known for fostering breakout stars who are able to attain national notoriety such as Chamillionaire and Paul Wall (who appear on the bluesy “Name Or Fame”), Slim Thug or Mike Jones.

Slim Thug in particular leaves a strong impression every time he gets on the mic, flexing his rhythmically precise flow and strong vocal chords. He usually doesn’t take the lead, but the way he opens the festive Johnny Guitar Watson interpolation “Real Playa 4 Ya” lends credence to his claim to be the ‘Boss of the North.’ Those looking for rhetorical brilliance or clever wordplay will not find them on “The Day Hell Broke Loose,” but if you can dig a posse of likeminded up-and-comers flowing and flossing over ’90s gangsta funk, sometimes in highly memorable fashion (AD Green on “Big Ballin’, Shot Callin’,” Big Pic on “Glassy 4’s,” Lil’ Mario on “Down South G’s,” Big Tiger on “Real Playa 4 Ya,” Paul Wall on “Name Or Fame”), you’re in for a thoroughly enjoyable listening experience. Michael Watts was wise enough to step back and let his rappers represent Swishahouse and to hire experienced producers. Swishahouse soon began to crumble once success hit, but on their way there they got a lot of things right, “The Day Hell Broke Loose” included.