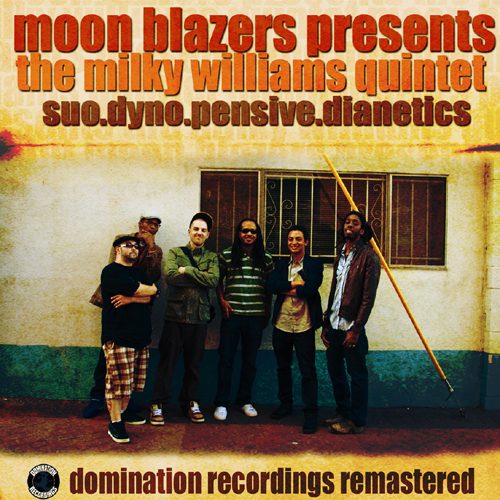 I’m on my third go-round now with the Moon Blazers in the last twelve months and decidedly undecided in my feelings about them. The first EP I reviewed showed plenty of promise and potential, while an album that promised to take me “Above the Clouds” actually left me feeling quite terrestrial. At first glance I suspected their new album “The Milky Williams Quintet” was actually an attempt to make up for that. It’s not hard to imagine you’re on a journey to the outer reaches of the Milky Way galaxy with that title; the Moon Blazers providing some musical accompaniment on the long years across interstellar space. As it happens the Moon Blazers do have a science fiction explanation for this album, but the journey never leaves the confines of planet Earth. The concept of this release is that the entire train car taking the group from New Jersey to Manhattan was time shifted to 1975, a concept straight out of Torchwood. There’s no Captain Jack to help them out though. Forced to fend for themselves, our ragtag group of heroes decide to become hip-hop jazz artists touring Europe to make a living, until another time accident returned to the present day unharmed with their memories and master recordings of those jams in tact.

Obviously this level of gimmickry will be anathema to a vast majority of today’s hip-hop audience, who like their rappers to keep it simpler than the thoughts percolating in Soulja Boy’s brain. It is also potentially too pretentious for the indie rap fans they are targetting, considering the Moon Blazers are still an unproven quantity in the world of hip-hop. The MB’s don’t seem to worry about it though and it’s best they don’t considering the heady brew of music they offer here. One has to encounter songs on “The Milky Williams Quintet” the same way and not get lost in the conceptualized marketing gimmicks. Songs titled “Black Market Rap” should be taken at face value and not as an attempt to sell you a Dogon Eye for an exorbitant fee. In fact let’s let the group themselves explain:

“This that black market rap, pro black, know that
Feel that, sink back to when you felt that
boom bap – we got that, dope rhymes – we got that
Ill beats – we got that, mad skills – we got that
Man, I try so fuckin hard to make it look easy
Seize the, opportunity to kick it fresh, no less
I suggest you come equipped, with some ill shit
or don’t even bother, fluid under water like a tide
[…]
Each one of us is sick, so stay on the dick
So homo… yeah fuck that no homo shit, y’knahmsayin?
Bein homophobic does not make you tougher than me”

The Moon Blazers take an enlightened approach to hip-hop, but in a way it’s almost a retro throwback sound. The harmonized vocals and jazzy pianos of “Fall” could be a vintage Pharcyde track from the early 1990’s. “Show Stopper” travels even farther, spitting over a stripped down drum track at the speed of Big Daddy Kane or Kool G. Rap, although their swagger is not as nubian or gangster as either of these two. Still the unapologetic sentiment “(If) you sayin hip-hop isn’t art well FUUUUCK YOUUU” is very well received. “Wave (Can’t Stop)” goes still further musically, having the light airy feel of a AM radio crossover hit from the 1970’s, although rap is definitely up-to-date. The end result is much like a solid Little Brother track:

“Been blessed with this God given talent
Unsure of how to use it, screw it, I’ma chop it up before I lose it
Refute it, get sliced from head to toe
Sewell is so outlandish, he don’t brandish no heaters
Just spit like cheetahs on the run
No stoppin, over plain, open range, all these haters blastin
like the teacher, see a dude like me don’t give a fuck
I spit to studio or in my truck
in a cypher, or on the toilet
Royal flushin these whack forces, four aces you can’t hold ’em
Texas neither if you ain’t a believer
Then go ask Jesus, told me to rock ’til Earth freezes
You candy rap cats need to go read some Reese’s
True school, that’s my thesis
Slap the mic, leave the shit in pieces”

The one and only thing that’s truly misleading about “The Milky Williams Quintet” is its relationship to the coverart – the name implies five members while the album cover shows six. Perhaps the extra man in the photo is just a session musician who jammed with them in the 70’s until they could make it back to the present day. Whatever – the explanation isn’t really needed anyway. It’s songs like “Ridiculflow” encapsulate both the highs and lows of the Moon Blazers experience. On one hand you’re entranced by the smoothness of the audio backdrop for the hip-hop and the deft lyrical delivery, on the other you’re left wondering what exactly it is the Moon Blazers are trying to achieve. Are they the new generation of Jazzmatazz, are they the modern day Native Tongues, are they hip-hop deconstructionists, are they all of the above or are they NONE of the above? It’s not easy to decide but it’s definitely easy to listen to. This album rekindles the good vibes I got from their first EP and makes me feel it’s worth keeping an eye on these trail Blazers.