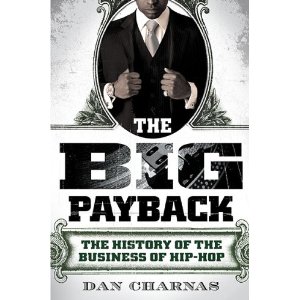 Dan Charnas :: The Big Payback: The History of the Business of Hip-Hop

Dan Charnas knows hip-hop. He worked at both Profile Records and Rick Rubin’s American Recordings, handling artists like Run DMC, Rob Base, and Sir Mix-A-Lot. He was one of the original writers on the Source, and has continued to write for about about hip-hop and politics. His insider knowledge and journalism chops show throughout “The Big Payback,” a 650-page look at the history of the business of hip-hop, from DJ Hollywood getting paid in cocaine in the 70s to 50 Cent signing to Vitaminwater for millions in the 2000s.

Charnas starts with hip-hop’s awkward transition from disco-related fad to legitimate art form. He describes how disco labels Profile and Sugar Hill latched on to rap music as a way to get away from the sinking ship that was disco. Charnas then explores Def Jam’s founding, how the combination of eternal hustler Russel Simmons and entitled genius/asshole Rick Rubin (Charnas’ former boss) created musical history. He describes Rubin’s appreciation and approach to hip-hop as an eternal search for what Rubin called “the worst shit,” music that was so low-brow it was high-brow.

The section on L.A. rap is particularly interesting, because virtually all of the West Coast artists released their early records through one “label,” Macola. It was basically a record printing press that began pressing and distributing copies of artists’ albums in exchange for a cut of any profits. The head of the label never signed his artists to contracts, and as a result they would jump to a bigger label as soon as they had a hit. In essence, Macola helped break artists without profiting from them, leading to its demise. Still, had they not put out records by unkowns, artists like Ice-T, N.W.A., Too $hort, and MC Hammer might all remain unknown.

The book reveals how racist the music industry, and the country in general, was in the 80s and early 90s. Throughout “The Big Payback,” Charnas tells the same story over and over again: how hip-hop artists, promoters, and supporters tried to get their music signed to labels and played on the radio, and how they were told over and over again that white people didn’t listen to black music. Black radio and record executives looked down on hip-hop as first a fad and later as street music tainted with violence and misogyny, and white execs felt that blacks were an unattractive group from a marketing perspective. Having your label, station, or brand associated with blacks meant lower ad rates and potentially alienating the white kids who had most of the disposable income. Things aren’t perfect now, by any means, but they sure are a hell of a lot better – and the acceptance of hip-hop by the mainstream had a lot to with that.

It’s no accident that the breakout hip-hop acts appealed to a rock audience: Run DMC with their cover of an Aerosmith song, Public Enemy with their punk take on hip-hop, and the Beastie Boys, three ex-punkers who decided to pick up mics rather than play three chord thrash. These three groups convinced rock fans, rock critics, and label execs at rock labels that there was something to hip-hop both commercially and artistically. Still, Charnas shows through the controversies over the Geto Boys and Ice-T that the relationship between gangsta rappers and multinational corporations has always been strained.

Charnas writes like a journalist, and he does an especially good job of staying neutral. He is honest about his subjects’ unattractive traits, but doesn’t vilify anyone. Even obvious targets like Vanilla Ice and the Source’s David Mays are spared direct criticism or editorializing by Charnas. Their bad actions speak for themselves. The same goes with Sean Combs, Damon Dash, and Def Jam exec Lyor Cohen, whose unattractive traits are laid bare alongside their positive traits. It’s clear from “The Big Payback” that the hustle and hutzpah that it takes to make it in the music industry don’t always pay off once you’ve actually made it. Damon Dash in particular seems to have been undone by the hard-headedness and arrogance that got him where he was in the first place. To paraphrase John Steinbeck, the traits of a good businessman not being the traits of a good human being.

The book is not without its faults. Too much space is devoted to East Coast labels, especially Def Jam, at the expense of labels on the West Coast and South. Reading this book, you’d think that the only label that mattered was Def Jam, and that all of the interesting talent in hip-hop comes from New York. No Limit and Cash Money get some print, but the explosion of Southern hip-hop in the 2000s is ignored. Charnas leaves indie labels out almost entirely. He also lets the excesses of the 90s off the hook, beyond criticising Puffy and Damon Dash’s extravagance. Charnas doesn’t explore the downside to having the hip-hop generation being marketed to by soda and clothing companies, what it means that today’s rappers are businessmen first and rappers second, or how street teams like those masterminded by Steve Rifkind’s diluted or negatively impacted the genre and our culture. In Charnas’ mind, any business is good business for hip-hop, so long as it stays relatively true to the cutlure’s roots. Exploiting that culture to sell products is perfectly acceptable.

Charnas’ omission are no doubt due to the book’s length. It seems as if Charnas’ editors told him to wrap things up around the late 90s. Any events not related to 50 Cent or Jay-Z past the year 2000 are ignored. Charnas also doesn’t have the space to delve too deeply into many of the facets of the business, touching instead of the most significant examples and the artists he knows the most about. This book could have been five times as long and still would have left out a lot of important artists and events. Hip-hop history had 30 years to unfold; Charnas had only 650 pages to cover it.

From in-depth analyses of the Wu-Tang’s deals to a play-by-play look at Ice-T’s “Cop Killer” debacle, “The Big Payback” is essential for any fan of hip-hop. Despite its length, it is a quick read and constantly engaging. Think of this as the perfect companion piece to Jeff Chang’s essential “Can’t Stop, Won’t Stop.” Both books lay out the history of hip-hop with skill and love.

Dan Charnas :: The Big Payback: The History of the Business of Hip-Hop
8.5Overall Score
Content8.5
Writing8.5