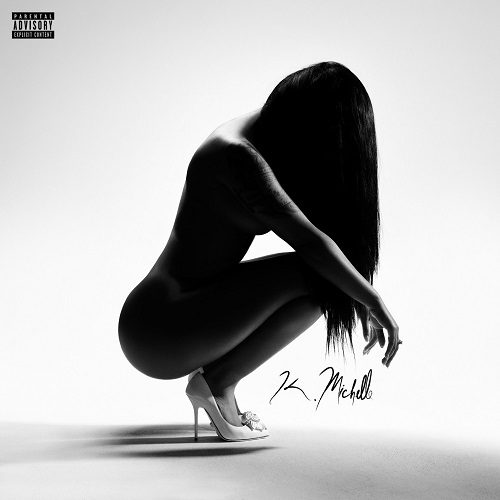 With most music sales these days coming from digital sources such as iTunes or Spotify, it’s easy to overlook an album cover. Ironically, this album is currently £4.99 on Amazon UK in MP3 form, but over £15 for the CD; this begs the question as to why bother buying the physical when I could probably buy three albums for the same price. K. Michelle clearly has a stunning body, but I’m not paying £10 extra so as to have a bit of soft porn on my book shelf. As the artwork suggests, unfortunately K. Michelle is known for being a bit of an attention seeker – just give her a quick Google search and numerous rumors and pieces of gossip will appear. You may also know of K. Michelle from the television show Love & Hip-Hop which appears to include little of the latter.

What interested me was that this album was inspired by her relationship with much-loved British actor Idris Elba (a.k.a. Stringer Bell, Luther, the next James Bond). This is backed up further by a track devoted to Drake – “Drake Would Love Me”. You’ll also notice her huge derriere – it’s more of a derriRARE as there aren’t many of those in this world. K. Michelle has confirmed that she has had butt injections which is no surprise, but it’s a distraction from the real reason K. Michelle has fans – her vocals. There are similarities with Keyshia Cole outside of their similar appearance, but I do find K. Michelle is susceptible to warbling and utilizing Autotune. It’s a shame, because some of the production on “Anybody Wanna Buy a Heart?” is excellent and there are moments where she smashes it with her trademark bluntness.

The album opener “Judge Me” shows that criticism and hate isn’t a new thing to K. Michelle. Lyrically it’s nothing revolutionary but I’m glad that she used it as an opener, as there are plenty of tracks here that will see K. Michelle being judged. “Love â€˜Em All” boasts an eye-opening and oddly awkward video as K. Michelle shares how she loves all of the men she sleeps with, despite what her partners in bed may think. Essentially, she loves sex and enjoys breaking hearts, and it’s a theme that runs throughout this record just as the album cover suggests. As a man, I’ll admit that I prefer hearing sex being sung, than being rapped and have never quite seen the appeal of the butch, masculine raps of Lil’ Kim or Foxy Brown. Where “Love â€˜Em All” works particularly well is in its electric guitar-fused instrumental which pushes K. Michelle away from the foreground to a degree; becoming one with the track.

There is a distinct Hip-Hop influence on some songs – Melle Mel of all people is cited on “Going Under”. The aforementioned “Drake Would Love Me” panders to a different fanbase (just as Drake did with his track “Wu-Tang Forever”) and could have worked better if it wasn’t simply K. Michelle asking Drake to do the business with her. There’s a certain role reversal if that did come to fruition, as Drake would be the soppy one while K. Michelle ignores his calls and simply moves on to the next man. She doesn’t even try calling the love of her life on “Maybe I Should Call”, a track which I’m not sure if it’s about Idris as she talks about trying to compete with a baby. Musically though, it’s one of the best tracks:

The worst track by far is “Hard to Do”, with K. Michelle’s vocals drifting in to dodgy X-Factor contestant territory. The hook is full of warbling and is surprisingly irritating; the overall performance sounds different also, as if some vocal chords were strained during the recording sessions for this track. It’s a shame, as the production from Soundz is worthy of better.

“Build a Man” takes the novel (and frightening) idea of Build-A-Bear and applies it to men, and it’s these dark and fantasy-driven takes on cliche-driven themes that marks K. Michelle out as a unique artist. “Anybody Wanna Buy a Heart?” peaked at #2 in the U.S. album charts, but failed to chart here in the U.K.; a shame because her instability is a plus in a genre oversaturated with soppy breakups. You may be buying something closer to her legs than her heart, but K. Michelle’s latest album is a tempting effort nonetheless.