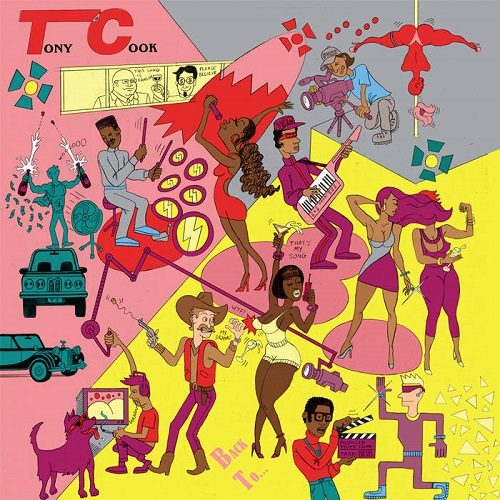 Tony Cook :: Back to Reality

The Human Drum Machine. The Grand Daddy of House. The Greatest Funkateer They Never Did Hear. Tony Cook has a lot of titles for a man who I only got to know before writing this review, and you the reader haven’t even had the luxury of hearing “Back to Reality” first. Perhaps before we all get back to “Back” we should back our way up into some biographical info.

Cook got his start as a drummer for James Brown in the late 1970’s, which was not as lucrative a gig as one might first believe given J.B.’s popularity was suffering at the time due to the rise of disco. As a result the Atlanta native Cook took on multiple gigs supporting everyone from Etta James to Taj Mahal, traveling back and forth between Britain and the United States, all while trying to launch an independent musical career in his own right. In the middle of the 80’s Cook put out his biggest single as an artist, “On the Floor (Rock-It)” featuring The Party People. To listen to it today is a throwback to old school hip-hop. I don’t mean “old school” the way kids today call Wu-Tang Clan “old school” because they were born in 1992. I mean TRUE old school – Afrika Bambaataa, Grandmaster Flash, The Treacherous Three, Funky Four +1 More, Sugarhill Gang, et cetera.

Even though rapping to the break had been around since the 1970’s and legendary deejays like Kool Herc, a lot of rappers of this era used their own live session musicians in studio to recreate those breaks. When you listen to the true old school, there’s a “big sound” that’s not heard in today’s slick manufactured hip-hop. The sound of those musicians echoes off the walls of the recording studio, and the rap vocals often sound as though they were improvised on the fly, even if they WERE written down in advance. Of course some criticism is also lobbed at these old school rap records for having overly simplistic lyrics and rhyme patterns, but as the craft evolved so too did the tendency to put “The Message” in the rap and not have it play second fiddle to making people dance. In the meantime it didn’t cause much consternation that songs like “Planet Rock” had non-sensical raps like “zuh zuh zuh zuh zuh” as long as you could get down to the groove – a groove that melded together funk, disco, R&B, soul and pop to create hip-hop.

Now back to Tony Cook and “Back to Reality” – an album which sounds quintessentially like the early 1980’s era of hip-hop. “To the Floor” embodies all of the trademarks of the sound – cavernous drum reverb, synthesizer keyboard melodies, admittedly primitive levels of vocal distortion and manipulation, and an up-tempo constantly evolving melody whose changes in structure encouraged b-boys and b-girls to show off their moves. This is not about real thugs gettin’ down to the flo’, this is about real breakdancers getting down to the DANCEFLOORbefore there’s no room left to bust a move. The rap is super simplistic: “Hey, everybody!/Can you feel your hands? Can you feel your feet?/Can you feel the rhythm, of the funky beat?” And for the most part the answer was yes. Thanks to a plug for a couple of WBLS deejays, “To the Floor” got some extra spins it might not have otherwise received, and in the process became a prototype song for house music style.

After this classic gem was unearthed, Stones Throw Records decided to take it to the next level and see if Cook had any other music from the era that was just as funky but didn’t get the exposure “To the Floor” did. To the surprise of all involved Cook had kept all of his master reel to reel tapes, some of which made their way onto limited release 45’s, others which had never ever been heard. “Back to Reality” compiles these songs together and where necessary adds additional musical or vocal contributions to make the songs complete, such as working with Dam-Funk on “What’s On Your Mind.” You’d be hard pressed to tell that some of these songs were only completed in the last year, as the additions or spit polish that Peanut Butter Wolf and Tony Cook put on the tracks blend perfectly into these 1980’s grooves. The artwork for the album reflects the time travel nature of the project perfectly: Pac-Man eats pellets on a TV screen, Vanilla Ice wannabe dancers show off their best Egyptian poses, and a jam session musician plays a keytar while people stand on top of vehicles popping champagne. It’s a very P-Funk visual.

Now to be clear this isn’t what normally passes as rap music in the annals of the RR review library. A majority of these songs feature no rapping at all. What they do feature is the SOUND you would hear on classic old school hip-hop records, which is what makes Tony Cook’s “Back to Reality” such a fascinating slice of history to release in the present day and time. It’s not going to be everybody’s slice of pie, even though the spacey echoing pianos and rhythms of “Burn Me Up” and crooning of Vernon Cheely ought to be able to rock a dance floor in any era. At 10 songs and nearly an hour long the “Back to Reality” album packs a lot of bang for the buck, and if you’re in the mood to go retro this is the perfect album to fire up when you put on your Michael Jackson glove, fire up the Coleco, play Donkey Kong ’til your hands get sore then go party at Studio 54. Just skip the cocaine and the bad haircuts and you’ll be aight.