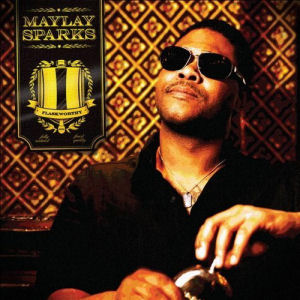 The RapReviews faithful may be a bit surprised to know that your humble critic is still a birthday removed from the legal drinking age, so I can’t speak with great wisdom on the subject of fine liquor. Still, I’ve always been somewhat intrigued by the almighty flask, one of drinking’s great symbols and message-senders. When one carries a flask, it tends to be concealed and used discreetly, whether the contents are being added to something else or consumed straight from the container. Carriers of flasks almost always tend to be older gentlemen, and they send the message that these drinkers are looking for an extra kick not provided by the circumstances. They also indicate that said party is not interested in sharing or being social with his drinkâ€”it’s for his enjoyment and his alone.

Maylay Sparks has been a recognized name in Philadelphia’s hip hop scene for years, but these days you’ll be hard-pressed to find him within the friendly confines of Eastern Pennsylvaniaâ€”for most of the new millennium he’s called Copenhagen, Denmark his home. One would never know by his latest effort “Flaskworthy,” though, an album so deeply-rooted in a street-oriented East Coast sound that one can practically hear the SEPTA trains rolling by.

Maylay has a familiar, well-grounded East Coast soundâ€”in his rugged delivery one can hear elements of Joell Ortiz, Big Pun, Noreaga, and countless Wu-brethren. Although Long Range first pressed physical copies of “Flaskworthy” in late 2010, it’s been available digitally since at least early 2008, but the beats throughout the LP sound like music from a New York project from 2000 or 2001. I don’t mean that so much as a criticism as a descriptionâ€”these tracks could easily have come from a Pun, N.O.R.E., or Eastern Conference project from that period. The opener “Toxic” featuring Lootpack’s own Wildchild features a beat that, at first glance, seems horribly haphazard, with disjointed layers of violins, horns, organs, and spare percussion pieced together rigidly. However, once Maylay and Wildchild clock in with their well-constructed sixteens detailing a luxurious European lifestyle and O.D.B.-worthy hook, the track assumes a hypnotic quality almost in spite of itself. The DJ Noize-aided “A Million Words” is similarly successful as the spotlight falls entirely on Maylay. “Lock & Load” featuring S&M finds Sparks in posse-cut mode, but the track is fairly representative of the overall product with rugged piano-laden production and hook pieced together with vocal samples:

“Mo’ money, mo’ problems
You think I give a fuck, I ain’t got none
Snipes get the masks and them big ass guns
I got two sons’ mouths to feed, smoke weed every day
So tell me how the fuck to get paid
Been betrayed, that’s why the game decayed
Kingpin, I remember when he deejayed, listen and replay
Fuck all that he-say-she-say, y’all niggas ain’t gettin’ off easy
Charge your front door, you know what I came here for
Compromise or be engaged in war…”

“Incidence” and “Get High” each boast exuberance via lush chipmunk soul, and fellow Philly native Reef the Lost Cauze shows up for “Absynth,” a rough street banger that coaxes a strong performance from Maylay. “Fuckinupthemusic” features a Premier-esque beat replete with melancholy keys and strings as Sparks and Kno-iota express their despair concerning the rap game.

The gem of the tracklist is the gorgeous “Fluid,” a six-minute masterpiece anchored by a complex piano arrangement, smooth flute, breezy island guitar, and excellent hook. K-Mass and Maylay trade heady rhymes as the beat builds, finally bowing out to let the beat speak for itself. It’s the type of song that could easily have stood out on any Wu project from the past twelve years and proves the highlight of “Flaskworthy.”

Maylay’s in beast mode throughout the final third, beginning with posse cut “8 Bars” featuring S&M and Roc Spotz and the self-explanatory “Promoter’s Nightmare,” outfitted with a speaker-busting banger. “Mo Beers (Remix)” is a J-Ro production positively dripping with classic Alkaholiks flavor, and both mixes of “Specialist” featuring C-Rayz Walz, Apani B, and Puppa J are chock-full of highlights, including Maylay’s verse that sounds great over both the thundering guitar-laced original and the more upbeat, horn-laden remix:

“Flaskworthy” is a rock-solid record from a veteran presence. Maylay is far from a complex rapper, but he plays to his considerable strengths, and the LP features a nice variety of street bangers, smoother jams, and posse cuts. He pulls few punches but instead comes armed with beats and rhymes that while perhaps sounding a bit dated prove strong throughout. With good production and performances from all involved, “Flaskworthy” is an album worth checking out, one that might inspire those of a certain distinction to raise their flasks to toast an underground vet.