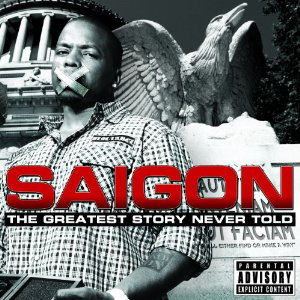 “Previously on The Greatest Story Never Told…” is how the long-running episodic saga of this album’s release is expected to begin, at which point one proceeds to detail Saigon’s long and tumultuous rap career from the last decade plus. On the other hand a writer can easily think “There is almost NO chance the reader/viewer/listener would be here if they hadn’t followed the last ten years of Saigon’s career.” If you’ve stuck with Saigon from the point this album was SUPPOSED to come out until now, congratulations on your perseverance. If you’re the one who happens to stumble into this story halfway through and has no idea what we’re talking about, flash back to episode one and episode two to bring yourself up to speed; if that doesn’t get the job done then just Google his name. There’s no shortage of coverage of Saigon’s drama out there.

It’s a little bit odd to find that this stalwart of the Brownsville, Brooklyn hip-hop scene (Buckshot, Masta Ace and M.O.P. are all from around his way) is signed to a label that has at times in the past made Caspar Milquetoast look like a man with a tan. Big Band Swollen Members. The more eclectic and diverse their roster gets, the more it makes sense that Saigon would wind up partnering with them to put this long overdue album out. Their national and global distribution is on lock, despite being fiercely independent and not giving a fuck what the mainstream thinks. “Clap” fits perfectly with that attitude, no matter how different their ‘hood:

“Do away with the hip-hop police force
Fuck the pigs, I was taught not to eat pork
Clap your hands if you ain’t forget where you came from
Clap again if you ready to see a change come
I used to live in the same slum
as Mike Tyson and Riddick Bowe, that’s where the knuckle game from
[…]
Now I be on the track like when the train come
Now I don’t rap just to jawjack, nigga I be sayin somethin!
And with my man Just Bliggity Blaze
You’re just about to witness history made – clap!”

The J.B. production that Saigon references gives this song a spiritual and uplifting dimension to match the message Sai delivers – a beacon of light he wants to shine on those without hope. That same production is one of the hallmarks of this much-anticipated album, making it all the more worth the wait to arrive. His versatility on the boards allows Saigon to be equally versatile on the microphone, seamlessly transitioning to different styles and topics. Saigon could be mistaken for 50 Cent on the raunchy “Give It To Me” featuring Raheem DeVaughn, and that’s definitely meant as a compliment, while the rock and roll guitar and chopped up repeating background samples of “Come On Baby” make him feel like fellow Brooklynite representer Shawn Carter. Oh wait – Jigga is on the song too!

Saigon: “Yes, I run ringers around the fraudulent type
Come here and I’ll show you that I spit on just more then a mic
I make it hard for niggas to breathe, please
These wicked emcees squeeze
Hammers like the Pampers used to squeeze, hit the DT
I Mike Tyson ya eye, put a permanent ring around it
Then go run in the booth and sing about it
Look, if I don’t hurt the nigga that play with my wealth
I’m like me on Entourage god, I’m playing myself, let’s go”

Jay-Z: “Super rich! Stupid bitches know I’m super vicious
like, standin over a wounded man wit, two biscuits
Let’s get it clear like eucalyptus, if you conflicted
My flow is like the Cuban Missle Crisis
Nigga, my hand missles in priceless
I hide a couple rare jewels in a verse
for my niggaz that like to listen like this
Hahahaha – you gotta let it do what it do, baby”

The boisterous and brash flows of both rappers is met perfectly by Swizz Beatz playing host and providing the hook – it’s cocky arrogant New York rap at its finest. The album is nothing if not full of defiance too, exemplified by “Bring Me Down Pt. 2” featuring Joe Budden not to mention the very title track that sets the tone despite not hitting your ears until the eighth track if you listen sequentially.

“Check, the attribute is God be
Lord Supreme Allah helper to another God in need, indeed
I feed off a lot of the bullshit that tends to succeed
I was waitin, Just went and took a minute to breathe
Even squeezed off a +Warning Shot+
Moose-knuckle to Brownsville, they impatiently waitin for your boy to drop
Lo and behold, “Greatest Story Never Told”
Chapter 1, Verse 1, the genesis of my scroll
is realer than 9/11, I rhyme about lyin reverends
while showin no total respect to the big guy in Heaven
I rap about politicians how money’s their acquisition
To get it they gotta keep us without a pot to piss in
Struggin to survive, 9-to-5 ain’t makin it
Turn on the TV all I see is celebs takin it
Feelin like they got all the bread but ain’t breakin it
We’re takin it, soon as I find a oven where they bakin it”

That’s only the first verse. The cocksure Saigon confidently states in the second stanza that rap “need(s) a leader like me to get us back on track.” With the amount of swagger he can muster in his vocal tone and the clever way he strings syllables together on the microphone, it doesn’t sound like he’s full of shit. If you got the impression to this point though that Saigon was NY-centric and had no love for the rest of the hip-hop nation though, you’d be dead wrong. Cleveland checks in on “Better Way” featuring Layzie Bone, Philly is represented on “Too Long” featuring Black Thought, and there’s a double dose of Houston thanks to guest turns by Bun B and Devin the Dude on “And the Winner Is” and “What the Lovers Do” respectively. And if the latter doesn’t already indicate that Saigon wants to be a man for all seasons, the sultry and seductive Marsha Ambrosius croons on the Kanye West laced “It’s Alright”:

“It’s alright, I write a letter dedicated to God
First I thank him, without him I’da never made it this far
But it’s hard, tryin to think of why he not gettin involved
It’s a lady with a newborn baby livin in a car
The police is beatin us up, the hurricane is eatin is up
Katrina floodwater was deep as a fuck
Dear Lord, are we ever gon’ receive our reward
for all our suffering and pain and misery we endure?
Just like the Trans-Atlantic slave trade, the AIDS, the crack
When are we ever gon’ get paid back?
P.S. write your boy S to the A back”

In some respects “The Greatest Story Never Told” almost seems overloaded – it’s like renting a porno and finding out there’s a dimepiece in every scene no matter where the camera turns. Yet like the drugs that Saigon so often notes infest his dilapidated neighborhood, the flow and the Blaze production are powerfully addictive. Even at over an hour and 18 tracks in length, “The Greatest Story Never Told” doesn’t feel excessive, because Saigon keeps changing things up over and over again. It’s the blessing and the curse of being held down and held back so many times on the road to releasing this album – Saigon has had the time to craft an epic hip-hop album that’s a fitting testament to his skill and his sheer force of will. He’s also made it incredibly hard for him to ever top this achievement, but here’s hoping it’s not ten more years to the sequel.