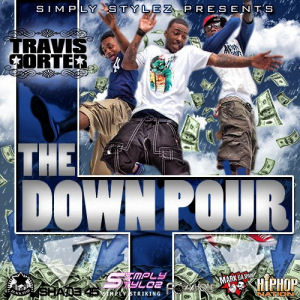 The group Travis Porter is probably more known for starting shit than being the shit after a short three year hip-hop career, but they always say it’s better to have people talking than to not be talked about at all. Based on that standard they can at least claim some level of success, as the Decatur rappers have already been embroiled in feuds with other notable successful Southerners like Roscoe Dash and Young Dro. For those not in the know the gist of the beefs between the Porters and these rappers is leaks on underground mixtapes with disputed ownership claims. To put it more plainly, they each accused the other of “Jackin’ For Beats” like Ice Cube, with the most famous example being that T.P. claim to be the originators of Roscoe’s hit single “All the Way Turnt Up.” Quite frankly that’s not one I would WANT to take credit for if I was the Porters, but the song did make Roscoe and Soulja Boy a grip of money and get hella spins, while Travis Porter is still being confused with the drummer Travis Barker of Blink-182. Ironically the group chose the name Travis Porter when they decided “Hard Hitters” wasn’t distinctive enough.

Having been hit with a link and encouraged to download/review “The Down Pour,” I think I was mistaking them for the other Travis myself, although on listening to the nine songs of this album/mixtape it’s more likely one would mistake them for Gucci Mane or Shawty Lo. It’s become all the rage to rap over the most simplistic loops in the most monotone manner possible these days, but even for progenitors of this rap style they set new standards. That’s not a good thing, although I did find it oddly appropriate when I heard the sound of a toilet flushing at the 20 second mark of “Girls Just Wanna Have Fun.” If you thought of Cyndi Lauper immediately, then the child of the 1980’s in you will be repulsed by the adult of 2011 who listened to this four note track. At the 45 second mark the song skips because the chorus and beat weren’t properly looped, and this happens multiple times. I’m a little stunned that Strap, Quez, and Ali would let this song out of the lab, but then again hearing the lyrics of the first verse I probably shouldn’t be:

“Gooey… not, not a bisexual
Up and down on my pole, she’s a profession-al
She said nigga do the math, drag the decimal
And she don’t like dick, but I’m exceptional
Oooh-wee, I’m feelin myself
Light another blunt, I’m feelin my wealth”

Lil Jon cameo and presumably provides the beat for “Fall Out,” and that’s easily the best song on this album. The problem is that it sounds like every other Lil Jon hit ever, and Roscoe Dash actually has a fair argument that you all sound like a rip-off of him on this track based on the sing song monotone drone of the introduction. Jon’s screaming delivery sounds like Shakespeare compared to your verses, and you should never be outshined by your producer let alone one not exactly known for lyrical loquaciousness. There’s also a song with the regrettable refrain “You wanna see some ass/I need to see some cash” called “Make it Rain” that’s co-signed by Rick Ross, an act he should haveSERIOUSLY reconsidered. This is their biggest hit to date though for better or worse, so the “for better” side is that a remix featuring Ace Hood, Wale and Tyga was included that marginally improves the song. By the time I got through I seriously questioned my sanity in listening to it.

It’s times like these that remind me why I send a disclaimer to record labels now saying “If you aren’t willing to accept our honest opinion being on the permanent record of this website, you shouldn’t submit your material for review.” I’m going to be perfectly honest in the most constructive way that I can be – this shit right here is BAD. I can tell somebody was trying to redeem this project and bring it up to the level it should be released as a mixtape, but they did not succeed. I want to make it perfectly clear to Strap, Quez, and Ali that they’ve achieved an admirable degree of recognition both locally and regionally no matter how they did it or who they feuded with to get it. Because of that fact I have higher expectations for a project like “The Down Pour,” and they in turn should want to put out a product that takes full advantage of their notoriety to give them shine. They’ve already inked a major label deal with Jive Records so at this point they’ve made it and no one review can change that. As a result it’s in their best interest to showcase why they got that big break.

If it’s a Gucci Mane/Roscoe Dash/Shawty Lo sound that Travis Porter was going for, “The Down Pour” should have been the best possible representation of that style and sound that it can possibly be, not an album that sounds rushed out to meet consumer demand. Give the people who like that style a 100% time invested effort with quality production, memorable hooks, and dance club hits. Regrettably what T.P. offers on this one is 30% at best, which means this T.P. only makes for good tissue paper.