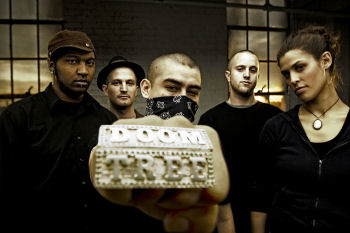 Doomtree is one of the biggest reasons Minnesota has become a prominent place in hip-hop. Sims was one of the founders of the crew, and although other members may have more material out, he’ll be releasing his second full length solo album, Bad Time Zoo

, on February 15th. We caught up with Sims to find out why it’s been five years since he released his last full length effort, what listeners can expect from it, and the advantages to being an artist in Minnesota. An avid sports fan, Sims also broke down the Vikings current stadium and quarterback woes, and let us know the kind of player he hopes they select in this year’s draft.

. First of all, I love the title. How does it represent the feel and the content of the album?

Sims: This is a question I have no good answer for. I just kind of stumbled upon it while writing the song “Bad Time Zoo

.” The album was initially called The Veldt, I don’t know if you’ve ever read that story by Ray Bradbury, because a lot of the songs use a lot of animal imagery as metaphors for human interactions. I believe that animals have characteristics and personality traits that are easy to spot, that humans have designated to animals, so I use animals as representations of characteristics, or personality types, that people carry with them. “Bad Time Zoo

” kind of stuck out on the album. A couple of friends of mine got Bad Time Zoo tattoos and I was like OK, sounds like it should be the title of it. That’s why we called it Bad Time Zoo.

AB: This is your second full length solo release. Your first was Lights Out Paris, which came out in 2005. Why the long break between solo projects? Was it just the Doomtree collaborate efforts?

AB: Did you gain any revelations on life and society in those five years?

S: Not necessarily about society, but my own personal life, yeah. Probably too many to stat rolling off, but a bunch of them.

AB: Moving back to the album, where is Bad Time Zoo

going to take me when I put it on?

AB: You mentioned the beats. I know when I lot of people hear “beats” they think “I can shake my ass to it.” It’s hard to describe production, but as far as the feel of the album, what’s it like?

S: The production covers a lot of ground, a lot of different elements are on display in it sonically. We use a lot of horns, we use a lot of strings, we use a lot of strange prog records from who knows where. I feel like there’s some beautiful moments in it where sonically it just creates a nice sounding piece that’s really pretty. There are also some really gritty, dirty, moments in it. The beats can get really aggressive during certain parts. There aren’t too many 808 club shakin type beats in it, but I believe fans of hip-hop, fans of production, I think that everyone will enjoy it and I believe the beats extend beyond hip-hop heads, I feel like they’re accessible to a large variety of people.

AB: Speaking of a large variety of people, you’re one of the founding members of Doomtree. Doomtree is an exceptionally large crew. In what ways do you think you separate yourself as an individual?

S: Doomtree started basically with a bunch of us getting together when we didn’t have the resources or the wherewithal to release albums individually, so we pooled our resources and started releasing albums together, like a co-op of sorts. So I believe that we all came into it with a solo artist’s mentality. The fact that there are Doomtree crew albums was spawned out of demand. I think all of us have a solo mentality in mind. We are all working on our stuff at any given time. Whatever separates me from the rest of the people in Doomtree is something I don’t really think about. I don’t really think about what is going to separate me from the rest of those people because the rest of those people are some of the most brilliant and gifted artists I have ever met.

AB: You’re in the home of falling dome roofs and sexts from quarterbacks. How different do you think the Doomtree story, and perhaps the overall hip-hop story, would be if you all had been from New York, or Atlanta?

S: I don’t know. I can’t call it because we’re not from there. I feel like here that’s no thirty-plus year legacy of hip-hop. It’s a small city. Obviously Rhymesayers put a huge dent in the map nationally with their recording artists and their ability to do a DIY label and make it into an internationally competitive independent label. They definitely paved the way for Minnesota hip-hop music and all respect due to them. But I don’t know. It’s not like we had from here Sugar Hill Records, Def Jam, Rocafella Records and the other 5,000 rap labels from New York, and we didn’t have Death Row and the other 5,000 labels from LA, so there’s a lot less competition. The other thing is here, without the legacy of hip-hop, there’s really no defined style of what you should, or should not, be doing, or carrying on any kind of traditions from the region, so we’re blessed with the idea that we can take a little piece of everything that we like and leave all the rest behind. I feel like that’s probably Minnesota music in general; there’s really no defined style of what you should, or should not, be doing and there’s no legacy to look back on and say XYZ all did this one thing and I should probably at least throw some of that in my style, or at least be heavily influenced by that style.

AB: In the lineage of Minnesota hip-hop, since you don’t have that 30 year history, would you consider yourselves more the Def Jam or the Death Row, and if you’re the Death Row, who’s Suge Knight?

AB: Thank you! Finally, are the Vikings going to get an open air stadium and start playing football like real men?

S: God I hope so. I fear that they’re gonna move to Los Angeles. I hope that that’s not the case. The thing is they want the state to cough up a bunch of money for their new stadium, which is all cool to me because I’m a Vikings fan, but at the same time it doesn’t make sense for my tax dollars to go there when there’s a budget deficit in our state, social programs get cut, health care is a very difficult thing to find, and they’re cutting off state aid to the health care here. I feel like the Vikings should be low on the list of people who get money. The other thing is they’re a multi-million dollar business that’s owned by a billionaire who probably doesn’t need the money that much. It would be like if First Avenue said we need a bigger venue and we need the state to pay for it, here’s our argument, we bring all types of businesses from all over the state, we’re collecting tax revenue from people that don’t even live here, we can get tax money from bands that are playing here, we’re supporting the parking lots, and people go to eat and drink at different places before they come to the show. That’s basically the Vikings’ argument and that doesn’t fly because that would translate to less than a hundred different businesses in Minneapolis. I really hope that they just get it together. More than anything I hope that they draft a quarterback this year.

AB: You don’t think Joe Webb is the answer?

S: He MIGHT be. He’s really athletic, but that’s the hard part about the college quarterback, in college they don’t really train them to be NFL quarterbacks, at least not at the competitive schools. The quarterbacks with all the hype on them, you don’t really see them often making it in the NFL. Akili Smith, Tim Couch, Ryan Leaf, JaMarcus Russell, they just don’t necessarily pan out, but then there’s the Peyton Mannings who from their rookie year on are absolute monsters that just kill it every year. I hope they get a pocket passer. We need the new Sean Salisbury. {*laughs*} The Vikings have a long and storied history of picking up old washed up veteran quarterbacks and using them. Jim McMahon, Warren Moon, Randall Cunningham, Rich Gannon, Sean Salisbury, Brad Johnson, Brett Favre. The only quarterback that we’ve had that was a young guy was Daunte Culpepper. We had Jeff George, Gus Frerotte, we’ve had a bunch of these old washed up quarterbacks that just can’t compete anymore, but they do, and that’s cool, but we need the next guy.

AB: You know who’s next with that lineage – Donovan McNabb!

S: Oh, that’s right. I hear that we’re gonna pick him up. That’s the plan at least, I think.