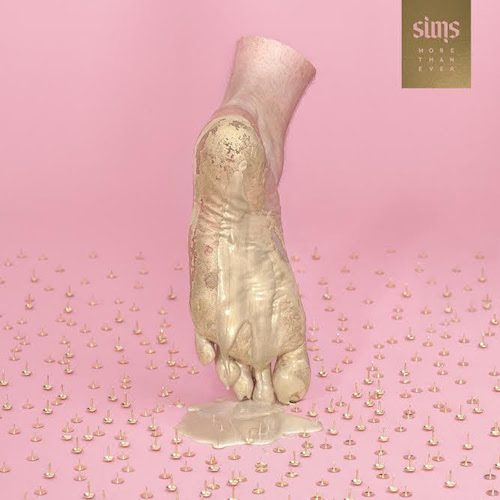 Sims :: More Than Ever

The cover art lets you know right away you’re in for an unusual experience. A disembodied foot seems to have been dunked unevenly in a can of gold paint, after which it decided to walk away across a floor littered with thumbtacks, paint still dripping off in huge greasy globs. I suppose if I had to walk across tacks any protection would be better than none, even if it was only one layer of latex paint, although I’d much rather a big thick pair of Timberlands.

Of course to say anything about Doomtree collectively or individually was the “usual experience” would be a misstatement of the highest order. This Minnesota based crew (and label imprint) has always prided itself on its DIY aesthetic and critically acclaimed albums whether self-released or farmed out to other independents. As a soloist Sims has already had a couple of albums and EP’s over the last decade and change, but hasn’t quite reached the notoriety of his labelmates P.O.S. or emcee/singer Dessa.

“More Than Ever” might be the album to change that, though nothing about the Doomtree family has ever followed conventional rap rules. While the music they make clearly comes from rap traditions and is more easily identifiable as hip-hop than some of today’s AutoTuned rap singers, the flows and production styles are anything but ordinary. As Sims himself says on “Badlands”:

“While you were breaking into the ad world
I was breaking rules with the GLAAD girls
I was making moves that’ll make yo’ head spin
See the dead end for a dead end
This is for my dead friends
Coming for to take you there, that truth won’t bend”

Fellow Doomtree crewmate Lazerbeak provides the production on “More Than Ever.” He’s on the right path with songs like “Icarus,” combining a boom bap sensibility with an electronic approach, making a thumping track that’s a living contradiction in its natural artificialness. Sims is a self-indulgent rapper, which at first glance sounds like an indictment of his tendency to explore his musical whims, but actually is a compliment given he has good instincts about which directions to go. “OneHundred” is the lead single and also the ideal example of his flow taking Lazer’s track in interesting directions that keep you following his story.

“I stopped tripping about the powers that be
Started thinking with the powers of ten
Give you a sense of the lens
Follow my lead as I cut through the breeze
Every step GPSed, CC TVed
Every breath squeezed through some SJW’s tweet
You’re so off beat and so PC
They take the sweet right out the cantelope
Damn, they take the beats right out the animal – can I live?
Well ain’t that a bucket of dicks
I was just having fun runnin from the abyss
Now you coming in hot, and telling me what the shit is
or what it is not — and what’s cut from my rib
Script never fit, pink mist, ever since
me and my brother were kids, Newports flip tricks on a grip
Tell the world which dick he can kiss
Killer big, leave the rest for the buzzards to pick”

I can’t tell you this album doesn’t assume some forward thinking expectations from the listener. It’s not that Sims is using incredibly large words that will make you reach for the dictionary every bar, nor that he has built up layers of metaphors that you won’t be able to decipher, but when you title a song “Voltaire” and talk about “the sweet scent from the bakery, and the piss from the street” you know you’re in for a ride that is both witty and satirical. Sims is thought provoking almost by accident — or as he says himself on “Gosper Island”:

“I could just laugh into these spaces I can’t see
Between my skin and clothes, between my teeth and ghosts
The hidden folds between the sand and beach
How to count the waves”

A part of me is tempted to call “More Than Ever” some post-modern avante garde hip-hop. While Sims is clearly inclined to march to the beat of his own drum, he’s not in completely inaccessible arthouse territory at least for me. I can’t say that “More Than Ever” is for everyone, any more than I could say that about the catalogue of the entire Doomtree collective as a whole, but if you wanted to see how rap evolved into convention defying new styles and sounds in the frozen wastes of Minnesota they’d be as good a place to start as anything from the Rhymesayers clique. I think I’d call it “accidentally evolutionary.” Without the implied pressure to have the next hit record, the next dance trend, the next sing-along anthem, the next ode to taking excessive amounts of mind altering substances, rap took a left turn in the Midwest heading due North and found itself a space to be different. For those who like something different “More Than Ever” is what the doctor ordered.