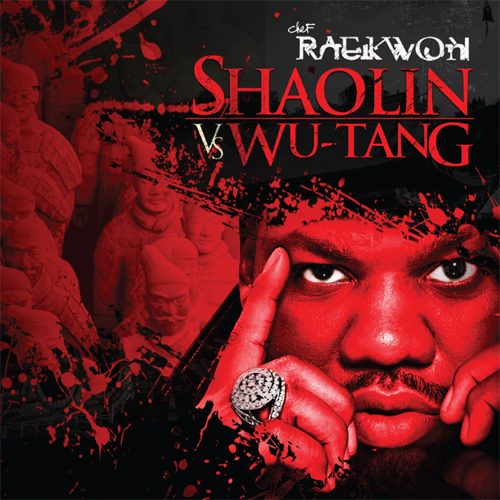 Originally this album was conceived as Raekwon’s response to “8 Diagrams”, as he stated numerous objections to the sound and style of the album in interviews after it was released. It was stated that “Shaolin vs. Wu-Tang” would be an album of original beats NOT produced by RZA or his affiliates, featuring any and all members of the Clan who wanted to participate on it. Time passed and so did the debate about “8 Diagrams,” and while there have been the usual slate of Wu solo albums and a few compilations, that “response” never emerged and in all likelihood was forgotten about by all but the most dedicated Wu-Tang Clan heads.

A little over three years after “8 Diagrams” the idea of “Shaolin vs. Wu-Tang” has resurfaced in the form of a solo album from founding Wu member Raekwon the Chef. He’s long been a fan favorite for his storytelling raps, raspy voice and colorful slang, and came correct in 2009 with a long awaited Part Two sequel to his classic “Only Built 4 Cuban Linx” album. Raekwon’s never been the type to rest on his laurels though, whether his albums have been critically acclaimed or strictly for the underground hardcore Wu heads. It makes sense for Rae to drop “Shaolin vs. Wu-Tang” on a variety of levels. Since the album was conceived as a return to the classic Wu-Tang Clan sound, and Raekwon just dropped a sequel which was that very idea personified, he’s become the de facto guardian and protector of the Wu way, in many respects usurping RZA’s role as spokesman and architect.

It should come as no surprise that RZA is not found anywhere on the 17 songs of “Shaolin vs. Wu-Tang” then – not as a guest star, not as a producer, not in any shape or form. It would be going too far to suggest this is a permanent rift in the Clan, but it’s also fair to suggest that solo albums like Rae’s represent a power shift in being able to assemble talent for a Wu related album. Not only is the Clan well represented on this CD, a who’s who of today’s most well known rappers and producers have lent their talents to this release. The end result is collaborations you probably never expected but will thoroughly enjoy on listening. Take for example “Rock N Roll,” produced by DJ Khalil, featuring Ghostface and Jim Jones.

Raekwon: “Willie Nelson nigga, we run flusty, crocodile hat
Cowboy rap, hammer game trusty
Diamonds on from Ghana, Boca retire in a yacht
With the middle name Lex, pop my llama
Movies get made in HD, me against your eighty-three
I’mma scout face it, so scrape me
It’s nothing you can do with my real niggaz
Not the ones I rest my head with, my son a real dude piranha”

Ghostface: “I got that Mickey, baby, little mama
I got the bomb, call me Tom Brady
Move like a running back, 21 Tomlinson
Know how to push it back, you should pay homage the shit is too potent, make you feel like vomiting
Your black/white birds can give me five like Donovan
Pop the champagne for the illest hustler in the game
I got the Pink Floyd, Ozzy all day”

Jim Jones: “Rock star like you Red Hot Chili Peppers
I can’t front this red drop got me feeling extra
I drop the top so I can show the stones
I got the sour so I’m Rolling Stones
I’m popping shit on my mobile phone
I never slip cause I keep the fully loaded chrome (LOADED!)
And half my niggaz either state or fed
That’s why we pour liquor for the Grateful Dead”

The surprises keep coming throughout this album. Raekwon and Method Man ride to a noisy Oh No beat on “Every Soldier in the Hood.” Bluerocks gives Estelle the chance to croon and get down with Rae and Inspectah Deck on the pure martial arts throwback “Chop Chop Ninja.” At only 1:55 long the Scram Jones produced “Crane Style” is arguably too short, but hearing Busta Rhymes team with Rae over the lightly tapped and rattled beat plus Eastern flutes makes every second of it a blessing. Kenny Dope’s work on “From the Hills” inspires Raheem DeVaughn to croon like Curtis Mayfield, while Method Man quips “Reunited, another LP, world excited” harkening directly back to the “Wu-Tang Forever” days. Raekwon collaborating with G-Unit’s own Lloyd Banks? It comes to pass on a “Last Trip to Scotland” courtesy of the aforementioned Mr. Jones, and he actually UPS the gravelly quotient of his voice to stay one step ahead of Rae. If you were upset that Nas didn’t make “Cuban Linx 2” then the Sean C & LV produced “Rich & Black” is the answer to all of your prayers:

Nas: “Caked it in savings, spending, wasting, it’s like a custom
Tats of horror-glyphics, lipstick on the collar
I got more to lose than you do, but I’m a rider
When did the rules change, ya’ll living trendy on pennies
Meeting deadlines with ease, no gain
You fire, I’m butane, gave the Timbs, ostrich belts
These by the times that I surprise myself
My niggas looking like black crows at packed shows
The don voice stay prestine, like I’m still seventeen”

Raekwon: “Aiyyo I’m rich, black, umbrella calico captain
Wes Craven with a blade and a black
I’m hood ornaments, junkies win awards in my tournaments
My shit is listed like informants pics
You know we order hits, planes flying, niggaz is sure to getcha
Whether in Costa Rica, Lisa, she sure to twist ya
Eating Chow Lo Mein with chopsticks, glocks with aim
Watermelon chips, pop some ‘pagne”

Every time you turn the page to another chapter of “Shaolin vs. Wu-Tang” you get a pleasant surprise. One minute Rae is flowing to an Alchemist beat on “Ferry Boat Killaz,” the next he’s busting off shots with Ghostface and Rick Ross on “Molasses.” There’s one in the chamber and sixteen in the clip on “Shaolin vs. Wu-Tang,” and if you’re a fan of either Raekwon or the Wu in general you’re not going to mind being in the crossfire when these shots pop off.