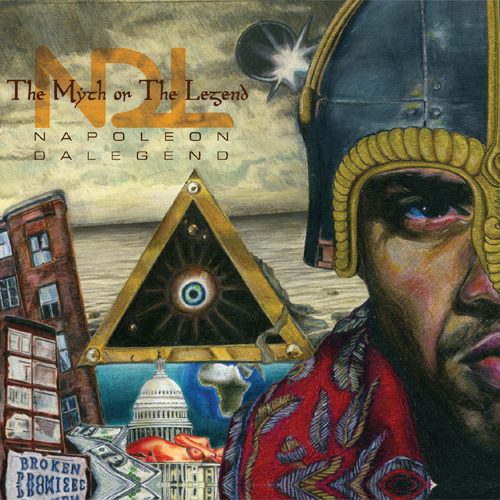 Napoleon Da Legend :: The Myth or the Legend

Versatility is an underrated talent for a lot of artists. I think it takes a lot of intelligence, deep understanding, and raw talent to be able to switch up style, flow, and tone to fit any beat. That would be the most redeeming quality of Napoleon da Legend on his 9-song release “The Myth or The Legend”. That’s not to say that Napoleon isn’t skilled with his flow, nor am I saying that Napoleon is subpar with his lyrics. He’s sharp on both major qualities of a rapper, but I’d say the one thing that helps tip him over the scales is his versatility. It might be better if I just go focus on a few tracks to describe what I’m talking about.

With “The Myth or the Legend”, J-Dub the Sound Professor crafts a nice combination of vocals, chimes, and staccato hi-hats and claps to give the beat a feel like a Middle Eastern minefield. Napoleon takes his time to speak over the somewhat chaotic cadence to glue the song together. He’s got some nice bars like: “Couldn’t follow da Legend with ankle detectors, or GPSes” and “fuck Bonaparte Josephine, I married Joan of Arc.” The entire song is just a showcase of Napoleon’s lyrical prowess and his ability to drop knowledge, which is pretty nice.

Life steps behind the boards in “Veni Vidi Vici Part 2” with a much harder hitting beat, with drums that slam and a simple and aggressive melody that brings the bass out of Napoleon’s voice. Rather than having the cool slow flow on “Mythologie”, Napoleon speeds up his spittin’ and brings some bigger emphasis to his lines. The theme is more street, more physical than cerebral. Lines like:

“I’m higher level of status, call this the rebel’s anthem
Yeah, then they like metal hammers mixed with the Devil’s tantrum
My whole fam’s liable to aim and fire at cha
Droppin’ new knowledge, throwin the Bible and the Qu’ran atcha”

Then Frontline Entertainment comes in with an entirely different flavor in “Get Loose”. This track wouldn’t be far from a seasoned club DJ that’s not afraid to deviate from the Top 40. There’s a fast-paced Latin drumline, with progressing synths and horns that climax with each sixteen that Napoleon drops. He speeds up his flow even more, but he showcases a softer tone, more confident, more pimpin’, more like he was whispering in your girlfriend’s ear. I personally think the song itself is too big of a deviation from the rest of the album, but hell, Napoleon does make a decent club track. After being treated to the intellectual and battle rap treatment in “Mythologie” and “Veni Vidi Vici Part 2” respectively, it’s quite an achievement. I can’t imagine The Last Emperor or the Demigodz making anything close to a serviceable club banger.

“March 2 Zion” is produced by Niroshima, with a much more organic feel. There’s purposeful pianos and strategically placed strings and violins, a hook and harmonizing from Tweeta Bird that bring that reggae flavor, and a smoother flow from Napoleon. Instead of emphasizing each line, everything comes out in one uninterrupted stream, letting the lines literally flow from the speakers and into the ear.

“The Myth or The Legend” is a great introduction to the talents of Napoleon da Legend. My personal favorites are “March 2 Zion” and “Veni Vidi Vici”. “Get Loose” and “Jah Don’t Lie” feel a little too forced for my tastes, but they aren’t complete misses. Overall, Napoleon da Legend puts together a nice package that showcases his ability to break down any beat, and almost any style. The man’s got skills. I suggest you give him a listen.