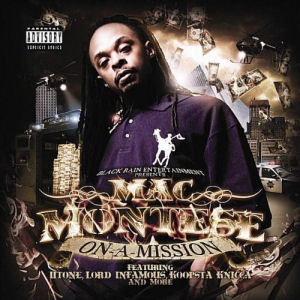 Mac Montese is the latest artist hailing from the Black Rain Entertainment family, the label best known as the musical home of their co-CEO Lord Infamous. He in turn is best known for being one of the founding members of Three 6 Mafia, but relations between the founders have been strained for more than a minute now. As such it’s never surprising if DJ Paul and Juicy J aren’t seen on a Black Rain released album, but not at all surprising when former Hypnotize Minds artists like Gangsta Boo and Koopsta Knicca do. Personally I wouldn’t mind seeing all the past and present Memphis family members peace it out and get together in the studio again, but in 2011, it is what it is.

The impression one gets of Montese from “On a Mission” is that he’s being groomed as a successor to Lord Infamous. That’s far from a bad idea given Infamous has had some serious health issues of late and could probably use someone to carry the torch for his label in the event of his untimely demise. Of course Montese can’t simply be “Scarecrow Part Deux” and expect to earn the respect of devoted Southern hip-hop fans, let alone a national or worldwide following for his music. That’s why throughout this 18 track album almost every other song finds him going for dolo. We’ll address the guest star situation momentarily, but let’s first see how Montese plans to keep it “Real” in rap:

“When you real you don’t say you real; real you don’t fake the deal
Real if you keep it 100 after you make a mill’
Real when you stayin down, real if you come back ’round
Really, on the outside they smilin, but inside is a frown
I got some issues on my mind and now it’s time for you to pay attention
You didn’t want to listen, so now I guess I gots to mention
Ev-ery-thing-I-done-did was off the fact that I was real
STILL, I feel, like I’m the one that’s left up out of the deal
Hell – takin my credit for shit I done done
Playin my hit but they say it’s his song
What’s goin on? Tell me I’m wrong
It’s got me off up in the zone
Now it’s time to make a song where everybody know it’s me
Mac Montese I’m from the streets, a beast up on these damn beats”

There’s a good news/bad news type situation going on here I’ll have to break down for you the reader in detail. Here’s the good news – Montese is competent at delivering a verse, his accent and diction are mostly clear, his vocal tone is not unpleasant and he doesn’t embarrass himself lyrically. The bad news is that puts him somewhere in the middle of the pack for rappers from any region of the United States. He tries so hard not to be corny that it may be working against him here. “I get plenty of ass, so call me an astronaut” may be one of Dr. Dre’s worst lines of all time, but no one forgets that line or the funky-ass song from the “Friday

” soundtrack he said it on.

Montese proves himself adequate to hold the stick as a soloist, but he fits very well into the other half of this album’s songs where he shares the spotlight. “White House” with Yung Madness sounds like a cross between a Gucci Mane and a Three 6 song, and that’s even more true on “Smokin Song” when Koopsta Knicca gets added to the mix. “Mean Mug” features the two chiefs of Black Rain joining him on the song, Lord Infamous and II Tone, while “Heavy Metal” is a posse song with the aforementioned Tone and Madness plus Slim Money, Fullclip and (speaking of cornball) Big Cheese. As with other Black Rain releases liner notes are all but non-existant for the CD, but a small note at the bottom of the back cover reads “Produced by St. Kittz, Maniak, Shun Flames & T-Magic.” We have no way of knowing who produced which, but for “On a Mission” it hardly matters anyway. Every song has a similar dark and sinister edge which both Infamous and his ex-friends in the Mafia are best known for.

A few songs stand out a little from the pack when the whole of “On a Mission” is examined closely. Montese has a convincing amount of swagger with the ladies on “Put It In” and the mellow tinkling melody belies a rather coarse sexual appetite. “Mackin” would pass for a hard hitting Three 6 produced song on any of their major label albums, as would the sinister keys and notes of “Swag Up.” “Night” has an uncredited crooner which gives an extra mellow flavor to the song, and Montese picks up his flow to the point he sounds more like a Bone Thugs affiliate than a Black Rain one. A lot of the songs are interchangeable though and that’s a big problem – if the rap on one fits perfectly on the beat for another without even changing the chorus or tempo “formulaic” creeps on into the discussion. Once again that may be the fault of a young rapper trying to do way too much, as 18 songs is really more than anyone needs from Mac Montese when he’s only just starting to emerge from the Scarecrow’s shadow. If Mac Montese stays “On a Mission” to improve as an artist then he’ll be worthy to lead the future of Black Rain Entertainment, but more work is required.