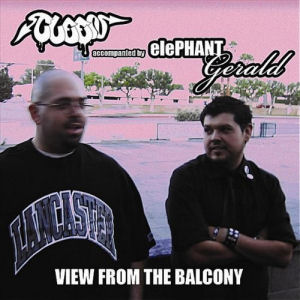 “The same reason some people like me, some people don’t
So we’ll either get along or we won’t
This song that I wrote’ll sum me up better than any conversation (uh-huh)
you’ll have with me, somebody that I knew, or CD review
Peek-a-boo! I can see you from my balcony seat
I also see your audience and half of them are asleeep
They’re missing you rape hip-hop, now she’s pregnant
So go to iTunes and download songs by me from your C-section”

The baldheaded rapper who badly declares that he’s “not famous enough to have my music found on LimeWire” is nowhere near as obscure as he thinks. The RR radar first picked up his blip in 2006 with the release of “Old Man Winter,” which for this site and a lot of his listeners put Lancaster, California on the map. Going back to his childhood Cleen has considered himself an outsider in his own community, a rapper where people would rather be rockers, and to some extent this attitude has carried over to his hip-hop career as well. There’s a wry sort of joke in Cleen’s folksy lyricism when he notes he’s not a superstar, yet won’t do any of the corny things that would propel him to a higher level of fame in the genre generally or mainstream music scene over all. If that’s what he wanted he’d be working with DJ Drama and Waka Flocka instead of rapping over Elephant Gerald. The name may sound like a circus act, but the beats on “Ain’t No Jive” aren’t clowning around.

“Wait until I tour your city – have skills, will travel
But don’t expect special effects, I’m not a ringtone rapper
I often wonder if that life is just for others
Sitting in the waiting room, but I forgot to take a number
But when somebody tells me ‘Cleen you’re the reason I still listen to hip-hop’
I kinda feel like it’s my obligation not to stop (thanks)
To some people, my boom bap is dated
They say I need to let go, move on to electro
Well thanks for the advice but I’ll keep playing my position
While you experiment someone should carry on tradition”

Cleen might not be the obvious choice as the vanguard of hip-hop, but the sentiments he expresses would undoubtedly be echoed by any better known industry veteran like Chuck D, KRS-One or Rakim. Over time listening to “View From the Balcony” you get the sense Cleen would rather sell 10 copies of his album and be proud of it than sell 10 million and be ashamed of what he’s done to the art and culture he loves. There may at times be cases where that makes him take what he’s doing too seriously, but that’s generally off-set by self-deprecating humor and a vocal tone that is nerdy but not unpleasantly so. Think of him as a cross between Gift of Gab and Devin the Dude – intelligent but laid back, thoughtful and charming, with a fondness for rap classics that these days may be getting a little obscure – like he and Gerald sampling Sir Mix-A-Lot’s “Posse on Broadway” for the modern day song “Boom Boom Man”:

“Boom goes the bass drum when Elephant Gerald
is a button pushing mood, he plays a hell of a carol
And it don’t have to be Christmas, phone tap or no witness
No rapping existence thrown back into business
The business is beats, and easy as Tunin Plugs like Prince Paul
and yes y’all, business is booming
This isn’t a tall tale or phony allegory
But I feel like I should give you guys some back story”

At which point he does – putting over his producer lyrically much like Whodini did back in the day on “Funky Beat.” Gerald’s touch certainly doesn’t hurt Cleen in any way on this release. The throwback cowbell and saxophone combo on “Palm Tree Music” is downright sexy. The slow tempo and hard hitting sound of “Strange Voices” could just as easily feature MURS, but instead offers a rare guest spot on this CD to Ofcelfe. Cleen takes other rappers to task for a lack of creativity on “Plagiarizer,” but the “lazy rapping” he lambasts wouldn’t be as fresh without the fast and original Gerald ditty bopping behind it. From the “brand new swag” of “Who’s That?” to the old school soul samples of “‘Til the Wheels Fall Off” it all makes sense, and the guest appearance of DJ Cheapshot from Styles of Beyond on “One More Time, Again” is a nice touch.

Cleen will be the first to tell you on “View From the Balcony” that his music is not for everybody. Occasionally he crosses from being a emcee with a mission to one who seems a bit smug about how nobody else is willing to do right by hip-hop other than him. It’s understandable how he developed that hard outer shell though when he’s struggled as an underground artist from a community that it seems offered him no outlet for rapping, then came of age at a time when the whole music industry seems to be in decline. In any case I can forgive the little bit of chip that he’s got on his shoulder since there’s something inherently likable about his ever-so-slightly nerdy approach to making rap music, and Gerald seems to be the ideal producer to get his message across. Bottom line – the view from the cheap seats is pretty good.