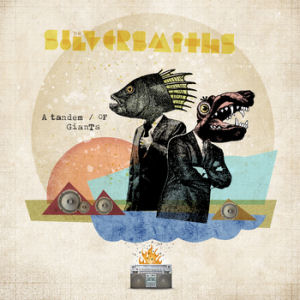 Silversmiths :: A Tandem of Giants

If you’re familiar with the artists involved The Silversmiths have actually been around for over a decade, dating back to when they were known as the White Collar Criminals of hip-hop. It wasn’t a bad idea conceptually and showed potential lyrically, but owing to a relative lack of experience and an overall lack of exposure it didn’t go that far. Years later Jon?Doe and Sankofa updated their name and their sound to release “The Algol Paradox.” It’s not as though both weren’t busy in the interim producing and recording, and Sankofa in particular has received praise and critically acclaim for his solo releases, but putting the two together seemed to raise the bar for them to challenge each other creatively.

“A Tandem of Giants” represents an opportunity for them to reach an even higher plateau, even as their humorous and self-deprecating press kit refers to them as “old and stuff” while noting that “Charles Bronson faked his own death just so rabid fans and Playboy bunnies would leave him alone long enough to listen to this classic rap album in its entirety.” Let’s put as fine a point on this as possible without being overly verbose – The Silversmiths take hip-hop seriously but don’t take themselves seriously. The title of their album alone is part of their wit, describing the artistic greatness of their collaboration and mocking the fact that outside of a cult fan base their reputation is a relative mystery. Would they like to be rich and popular? Maybe so but they don’t take the time to dwell on it, preferring the raw honesty of the life they’re living on “Lessons”:

Sankofa: “You better dust, that, under the rug
Cause tellin truth gets you nowhere fast and that’s tough
If you don’t know enough it must have never occurred
And it’s impolite to hold someone at their word
It’s much better to play games and dance around with lies
Than cut to the chase and be once surprised
I was, raised to be honest, but life isn’t built for it
Someone’s death means a chance to go and bilk corpses”

Lest that slice of lyricism give you the impression they are bitter, songs like the Agent Orange produced “It’s a Monstaaah” show their desire to crush competition:

Jon?Doe: “Always at the ready, your indomitable foe stands
Spacey Yeti bringing that abominable snow, man
Comparable to no man, terrible as Rodan
Conan, sword swingin, veritable slow hand
Cult leader, toss a dude – pulp reader, standin at the pulpit
with a pulverizing skull beater
Y’all need to recognize we so Ghidorah
A three headed monster here to stomp ya”

This is an album of different styles met by the common denominator of Sankofa and Jon’s friendship and the ability of Agent Orange to create compelling backdrops. “Hard Eight” swings like a Blackalicious track, and as one might guess from the title the entire song is a metaphor for gambling slyly referring to hip-hop where no matter how many times the slot is pulled “it never seems to work out the way that I planned.” The somber “On My Own” pulls you deep into the groove and gives Jon?Doe the chance to explain his anonymous toe-tagging moniker and why “even Agent Orange thinks I’m slightly off… beat.” The clever “Forever Is a Four Letter Word” works an OutKast sample while acting as a pure exercise in just how verbally creative the duo can be while trading bars – resulting in a vibe that’s pure Freestyle Fellowship. From the funky spunk of the opener “Back at Last” to the hard hitting braggadociousness of “What a Way to Go Out” featuring AthenA, there’s no doubt these Silversmiths have the alchemic skills to turn any iron bars into gold.

On occasion and despite their best intentions to not be “that indie rapper who bitches all the time” you can hear a little bit of a chip on the shoulder of The Silversmiths lyrically. Sankofa in particular seems a little vexed that he’s not taken seriously because he hails from Fort Wayne, Indiana. That’s both understandable as an artist and totally irrelevant in 2011 given our modern day interconnected world means that talented musicians from any part of the world no matter how modern or agrarian have the opportunity to record an album and distribute it online without ever seeing the inside of a studio. That’s not to say I hold how Sankofa feels against him in any way, but it’s worth noting that the artistic freedom of a relative anonymity in Fort Wayne takes off some of the pressure to perform, and just maybe you can have a drink at the bar without being bothered for an autograph. It might be worth it to relish being incredibly talented and relatively unencumbered by the trappings of a big city music scene like New York or L.A. That minor matter aside I can give “A Tandem of Giants” nothing but praise for taking the time to still care about making quality music no matter the size of their audience.