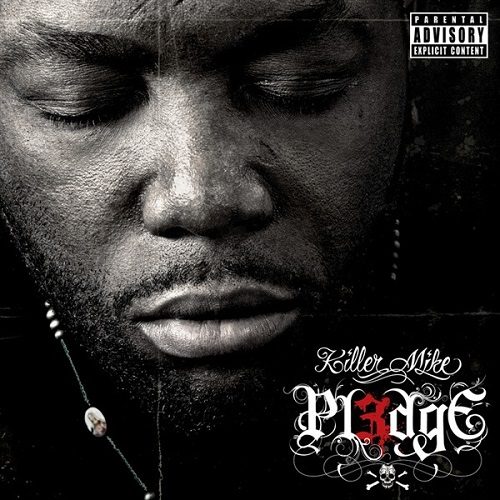 Killer Mike is the reason that I’m writing at RapReviews right now. I don’t know Michael Render personally, the introduction to his 2008 release “I Pledge Allegiance To The Grind II” deeply resonated within me. In just over two minutes, Mike let me know that I did not need permission to do something great, that I should fire my boss and that there was nothing in the world that could stop me from achieving whatever I wanted to achieve. Since then, I’ve picked up a few writing gigs here and there and started going hard with my photography. Small steps in the grand scheme of things, but a far cry from loading yellow pages into people’s cars and breaking down old coffeepots and disposable razors. In the time since “Pledge II,” Killa Kill has strengthened his already strong relationship with his fans, or supporters as he calls them and has become more outspoken than ever. With the third album in his “Pledge” series, cleverly titled “Pl3dge,” Mike Bigga proclaims this to be his magnum opus. Lofty aspirations indeed, but if anyone can pull it off, it would be Killa Kill from the Ville. “Pl3dge” features production from Smiff & Cash, Sweatbox Productions, No I.D., The Beat Bullies, Tha Bizness, Raz, Zone Beats, Flying Lotus and DJ Speedy. Special guests include Young Jeezy, T.I., Twista, Gucci Mane, Big Boi and long time collaborator Rock D The Legend.

“Pl3dge” gets right into the music from the jump with “So Glorious” and “That’s Life II.” The self-proclaimed “young Notorious” sets the tone that holds for the majority of the album. In 2006, on the first installment of “Pledge,” Smiff & Cash produced the original “That’s Life” which took aim at the lack of leadership in lower income areas and the reluctance of so-called celebrities to give back to the places they came from, among other issues. On the sequel, Bigga is even more meticulous in his criticism of political pundits, would-be religious leaders and their clueless minions, as he raps:

“Ms. Oprah, Mr. Cosby, I am right back at your ass
With all honor, Mr. Obama, please don’t walk out so fast
I got a question, got a question, got a question for ya all
Why when Oscar Grant got murdered, we didn’t hear a peep from y’all
We appreciate the way you delegate for Henry [Louis] Gates
But what about your people slaving in these fields everyday
We know that House got air conditioning and the sweetest lemonade
But don’t forget your color, brother, we still muthafuckin’ slaves
And that even goes for Puffy, who’s so muthafuckin’ paid
That he’s richer than these White folk or at least that’s what he say
That’s what he say, that’s what he say, and them petty niggas love it
Think about it, what’s a rapper standing next to Warren Buffett
[…]
Bishop Long, what is up with that monkey shit on your head?
Last I checked, vanity was a sin, the Lord said
On my life, I believe you put kids off in yo bed
Though some New Birthers and some Catholics ain’t gonna like what I just said
[…]
Mr. Beck, Mr. O’Reilly, Mr. Limbaugh, Mr. Hannity
How could you sell White America your insanity?
You tell them that they’re different and manipulate their vanity
When truthfully financially, their life is a calamity”

Plenty of talking points on the track and it lives up to its predecessor and actually exceeds it in terms of tenacity. If you’re a fan of professional wrestling, you know that some of the great promo cutters include The Rock, Roddy Piper, Shawn Michaels and the very recently departed Macho Man Randy Savage. Another one of the all time greats, if not THE greatest has many popular lines but is best known for one simple phrase: “Woooo!” Ric Flair set the standard for decades on end and Killer Mike takes the bravado, assurance and talent that Flair had in and out of the ring and puts it into the song of the same name. The audio clips of Flair are a welcomed addition to the track as Bigga reminds the listener that “if you chase power, you ain’t gotta chase women” and that “when you get money, you ain’t gotta take shit.” The production on the track gives it some high replay value as well. The lone official single that was released was “Ready Set Go” which was produced by No I.D. and features T.I., the album also contains a remix with a verse from Big Boi, reuniting the two on wax. “Go Out On The Town” and “Animal” should get heavy rotation in clubs and inside box frame Chevys and Cadillacs. The former features Young Jeezy with a verse that makes me wonder when, if ever Jeezy’s “TM103” will ever drop and the latter features the embattled Gucci Mane in his comfort zone. Back in January, the Funkadelic-sampling “Burn” literally set the blog sites on fire with its commentary on societal ills such as the murder of Oscar Grant, high unemployment, poor education and the declining value of the dollar, as he raps:

“It seems a nigga can’t get a job, but I can get arrested
Though shit was changing with this Black president shit
My bitch got me fucked up, goin’ to get tested
Cause while I was locked up, she was livin’ reckless
[…]
They say the cop wrote a letter apologizing to Oscar
Guess they say I’m wrong because I still say drop him
Police in the ghetto, they is killin’ niggas daily
But when we get to bustin’ back, they say that we crazy
Prisons overcrowded and schools is too
Cause they undereducate ya and got a place for you
Yeaaaah!
Niggas go to prison, the new age slavery
Now you know why they undereducate your baby
[…]
They say get a job, you can ‘Think & Grow Rich’
But what are you to do when a dollar ain’t worth shit
And the jobs ain’t hirin’ and unemployment gone
They gonna repo your car and foreclose your home”

“Players Lullaby” features Twista and Rock D The Legend and finds Bigga walking a young lady who is unsatisfied in her current relationship through her first affair, even congratulating her on growing up because of it. “Swimming” is a similar song that’s included as a bonus track. On the other side of that spectrum, “Everything (Hold You Down)” is all about doing everything imaginable for your mate, which is not limited to shopping sprees and expensive trips, but it’s a good start. Bigga makes it known that he’s not talking about all women, just his woman. Dedication to The Killer seems to have its rewards. A sample of The Dramatics’ “Door To Your Heart” is the backdrop for “American Dream,” a scathing diatribe on American greed. Mike goes to predict that one day in the near future weed will be as “legal as tobacco.” Another popular track on “Pledge II” is “God In The Building” so its sequel appears here on “Pl3dge.” On one verse, we find out just why Mike hasn’t blown up quite like many thought he should have by now, as he raps:

“The critics ask why Michael never blowed
Well, truthfully I met the Devil at the crossroad
He offered me success in exchange for my soul
He stripped me of my riches, broke me down like Job
First he took my car, and then he took my house
But he couldn’t take the Lord’s name out a nigga’s mouth
So then he took my friends, and then he took my fame
And then he had my former friends dirty up my name
And while he was lyin’ [lion], I was Daniel in the den
Walking with an angel, a testament to men
I can walk on water, I defy the odds
The Devil will give you fame, but he can’t defy my God”

Excluding the two bonus tracks, the album comes to a close with “Follow Your Dreams” and it’s here where I find the inspirational speech that I was expecting to find at the onset of the album. Mike encourages listeners and supporters to live their lives and fulfill their own dreams instead of being a part of the dreams of others. He goes on to give us all a piece of wisdom that was bestowed upon him by the late Pimp C: to fight for your dreams like a drowning man fighting for air. Killer Mike has the talent and versatility to come at the listener from multiple angles, but in my opinion, he’s at his fiercest when he wraps his hands around social issues and chokes the life out of them. He can get political as well, but to him the left and the right don’t matter…he’s a self-proclaimed detractor. Killa Kill set out to record his best album yet, and for what it’s worth, he’s done that. I’m curious to see and hear how an album that addresses nothing but social issues would turn out, but I’m more than satisfied with this release in the meanwhile as Mike continues to pledge his allegiance to getting rich independently, or simply put, the grind.