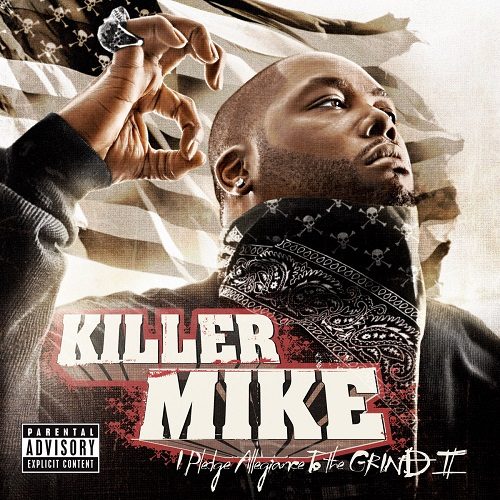 Killer Mike :: I Pledge Allegiance to the Grind II

I love to see some people suffer. As sick and twisted as the notion may be, when it comes to artistic passion a little pain and anger goes a long way. Killer Mike was a lyrical beast when Outkast put him on, but since the industry screwed him over Killer Mike has been a lyrical beast with a purpose matched by no other emcee in the rap game. Killer Mike’s passion rises above seeking retribution for personal misfortunes as he has taken up his supporter’s problems as his own. “I Pledge Allegiance to the Grind” isn’t so much Killer Mike’s narrative as it is his call for us to repeat the phrase and make a similar commitment to our own hustles. I doubt Killer Mike’s career would have found such purpose and importance had he not suffered at the hands of a cold industry. It’s a situation that has been faced by the best emcees. Ice Cube (coincidentally featured on “Pressure”) was much more compelling after his split with N.W.A than any other time in his career and only found his groove again with “Laugh Now, Cry Later.” Tupac was much more passionate when faced with adversity, even when it was self-created, than when things were going good. So while I wish Killer Mike the platinum success the man deserves, for the time being I will enjoy the passion that comes before the success.

If you haven’t checked any of Killer Mike’s newest album, “2 Sides” is the place to start. The lead single plays the trick of “featuring” Shawty Lo in the form of sampling one of his more famous lines for the hook, but the deceptive feature doesn’t detract from a dirty south banger:

“Too many niggas running round her lying
Claiming my city and they ain’t from mine
A-Town nigga, so real so raw
My bloodline is down my law
My pedigree is souls on three
Souls on one, souls on four
In other words fuck boy I ain’t no hoe
Nigga I’m known at the Amoco
Where the dope gets sold and the hammers blow
Still at the store where your grandma go
You know the same store that you can’t go
Cause you ain’t go, stop lying hoe”

The track calls out those who front about their hometown over a hard Wonder producer beat. For those keeping track, Wonder is best known for co-producing T.I.’s “What You Know.” The single is one of many street oriented anthems Killer Mike throws our way. “Big Money, Big Cars” samples a classic Willie D song over throwback Texas funk (think UGK circa 1993). “Super Clean/ Super Hard” is a smooth attempt to capture the spirit of “So Fresh & So Clean” and features 8Ball & MJG.

Killer Mike can capture street life with the best of them, but truly excels when he lets his spiritual/conscious side take over. On the intro, Killer Mike gives us a fiery speech where he does everything from thank and uplift his supporters to call out fake rappers. Killer Mike follows up his uplifting theme on “Can You Hear Me” where he relates his struggles and the difficulty of keeping his head up during the hard times. “Pressure” is a politically driven track featuring Ice Cube at the top of his game. The best track probably comes in the form of “God In The Building.” While I have to disclose that the track is co-produced by none other than The Cancer of “Kayfabe 4 Dummies,” I will also admit that given my hectic schedule I’ve only every caught one or two broadcasts of the popular podcast. So it’s not bias speaking when I tell you the melodic organs, choir voices, and deep bass give Killer Mike the perfect backdrop for his ghetto sermons:

“It’s hot like hell in the south
It feel like we in the devil’s mouth in the south
So why boy’s dripping? Cause we iced out
Cool as a cucumber hopping out
A seventy-three impala with the brains blowed out
Let the robbers follow, swear to God, fuck-nigga get your brains blowed out
Your baby momma followed her, your man’s shot down
I’m from Martin Luther King, respect it, it’s holy ground
Who’ thought a nigga out a shotgun house
Would ever drive a car with an angel that bow
I’m the shit, cuz I come from the bowels
Guts of the city, ain’t a nigga fucking with me
Young playa from the south tell stories like Biggie
Take the King’s English, paint pictures so vivid
That the missing loved will swear to god they living
If that ain’t god in motion, nigga tell me what is it
The church ladies weak when they hear your man speak
They say they see god in me, but I’m in the streets
They ask me why I’m rapping, tell me I’m called a preacher
I smile, I kiss them on they honey brown cheeks
I tell them god bless em and they concerned for me
But you can never walk on water if you can still feel the sea
If Jesus came back mother, tell me where’d he be?
Probably in these streets with me”

Killer Mike’s ability to balance the streets with an uplifting message makes him one of this generation’s truly compelling and relevant emcees.

Overall, Killer Mike doesn’t disappoint with his third album. While not as solid from start to finish as the first “I Pledge Allegiance to the Grind,” part two is still an outstanding collection. The mixture of hardcore street gospel and positive vibes is hard to come by, especially done this well. Killer Mike is truly this generation’s street revolutionary. Like those that came before him, Killer Mike’s allegiance to the grind is bound to pay off eventually. When that happens his music will likely lose some of its passion, but until then you’ll be hard pressed to encounter another emcee as talented, fierce, and dedicated.