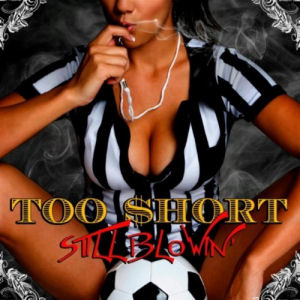 As Hip-Hop Hall of Fame candidates go, Todd Shaw a/k/a Too $hort is a first ballot, first year inductee. With the release of “Still Blowin'” in 2010 his career now spans four decades – the 80’s, the 90’s, the 2000’s and of course the decade this review is being written in. I wasn’t in on the earliest releases of his career, the tapes that legend has it were sold out the trunk of his car in East Oakland, but once he was under the Jive and RCA Records umbrella the “Freaky Tales” rained down on even the driest of Midwestern rap soil. At first the novelty of a rapper who abused the word “bitch” more frequently than a heroin addict does needles may have been the culprit, but over time and a continuing series of funky funky beats I was convinced his pimp wisdom was more than just the recitation of Blaxploitation films from the 1970’s. After all even KRS-One recognized that capitalism is a system of pimps and hoes. Critics by and large agreed – he was a foul-mouthed misogynist but not an unintelligent or ignorant rapper. Songs like “The Ghetto” are testament to his observational and oratorical skill. If you get over the hump of shock value he is an unqualified musical legend.

A certain amount of regret goes into reviewing “Still Blowin'” as a result. The best analogy I can think of watching Michael Jordan play for the Washington Wizards. You know he’s brilliant, you can feel that brilliance is within him, but somehow it just doesn’t click. Moments of greatness occur, and yet, mediocrity somehow surrounds him. There are more losses than wins and you have a hard time figuring out why. Maybe the team is to blame for not coming up to his level. Maybe he’s to blame for being arrogant enough to think he’s still relevant in a new decade. And just maybe, WE are to blame for wanting so badly to see him again that he made a decision based not on right sound reasoning, made only in an attempt to appease his large fan base. “Still Blowin'” has that feeling – and admittedly there are times when the feeling is good. “Fed Up” is one of those vibes that’s right. The music is apparently self produced, and the lyrics are classic (and yes misogynistic) Todd Shaw mack wisdom:

“It’s over – bitch I ain’t fuckin wit’chu
Don’t call me, cause we ain’t got nothin to do
You on your own now, find a new manager
My bitch is on cruise control – I can’t handle her
You so complicated, tellin lies and stuff
Too emotional for me, and you cry too much
I roll on these hoes when they test my game
They wanna be spoiled buyin extra thangs
We supposed to be a team, real players winnin shit
We hustle every day, and we share the benefits
It used to feel good but now I’m barely feelin it
Cause now, I don’t really care if we end the shit
Bitch! You gon’ change on me?
You better take a good look, cause you ain’t gon’ see
my face… ever again
I’ll find a better hoe and you can get a better pimp”

I say “apparently self produced” because this album was ONLY released digitally, which is both slightly annoying and suspicious. Didn’t Sir Too $hort think people would buy this CD in stores? Actually he may not have, because several times throughout he implies that this is a mixtape, even though these are full length songs with original production. One of the few times a producer other than Todd Shaw is obvious is “Checking My Hoes,” because Jazze Pha both produces ANDappears on the song. This too is no mixtape track – it’s up to par with anything in the Too $hort catalogue and features a cameo from Birdman.

Too $hort: “See I made up my mind when I was only a child
That I would hang with the big dogs, runnin wild
In the streets chasin cats, they lace these macks
Everywhere you go you know we take these gats
So they treat us like kings, they never try to play us
They wanna play with us cause they know why we players
I got it from my daddy, boy go tell your momma
I’m watchin cartoons man, I won’t, I’ma just
keep it to myself, and when I’m grown
I’ma get a lot of women and get my pimp on”

Birdman: “It’s the pimps of the pimps player
Went at hollered at $hort, come pimp with a player beotch!
Baby girl, this our year
You see them Lexus Coupes, so mine don’t fear
Gorilla pimpin, born hustlers
slash, the number one stunna
We them hood rich niggaz been ghetto bound
We worldwide hustlin, we ride Uptown
It’s the same ol’ nigga with the platinum mouth
If ye ain’t got no food I ain’t goin in ya house”

These are the high points of the album – something like Jordan being the first 40-year-old to score over 40 points in a game. Then there’s the uncharacteristic mediocrity, which I half-suspect is because of his lackluster self-produced beats and half-suspect is just Todd Shaw knowing he can phone it in because there’s still an audience for his work. “I’m Gone” may be a Lil Jon beat, given he’s the one of the few other producers I can find credit for, but if I was him I’d disown it because it sounds like a bad parody of his whistling crunk. Lyrics like “But everybody seems to know my name/and these hoes, know I ain’t playin/Bitch I’m gone, and I ain’t never comin back/Yeah I’m both – I’m a player and a mack” just don’t cut it – they’re simplistic by his own standards and retread themes he sounded much more enthused about decades ago. The title track’s beat would be boring no matter who spit on it, but weed smoke rapping has never been Too $hort’s forte and these bars from “Still Blowin'” don’t feel convincing:

“I smoke half on the way, the other half later
Receptionist flirtin with me, I don’t wanna date her
I just wanna hit, and sleep with the slut
We can smoke and fuck but don’t keep in touch
She got a sexy body, yeah she’s a hottie
She’s a nymphomaniac, nasty and naughty
I’m wit’chu girl, if you say so
She gave me a massage and I gave her a facial”

Even when Todd Shaw is trying to make a song about smoking hydro, it still ends up being a song about getting pussy. Far be it from me to suggest you can’t do both at the same time, but when Cypress Hill or the Kottonmouth Kings are getting zooted you’re not left with any doubt about what comes first. Good songs like “I’m a Pimp” featuring Earl Hayes still feel like they’re just going through the motions. After all, as pointed out in the opening paragraph, we’ve known he’s a pimp for decades now. He doesn’t really need to proclaim it.

Now whatever the fuck “Still Blowin'” is whether it’s the full fledged album it appears to be, or the mixtape Too $hort periodically claims it to be, it’s just not up to his own standards – that is unless the standard you use is “Get Off the Stage,” in which case Todd Shaw is doing just fine. Maybe too many years have gone by since “Short Dog’s in the House” type material any more – he’s simply past his prime. When he makes cameo appearances on songs like E-40’s “Bitch” though, I still see him hitting the net with a loud and audible SWISH. Todd Shaw still has it, but I think he’s letting his skills get rusty by taking too much time off from the game – and if he doesn’t get the right team around him he’ll quickly wind up too old to be a player.