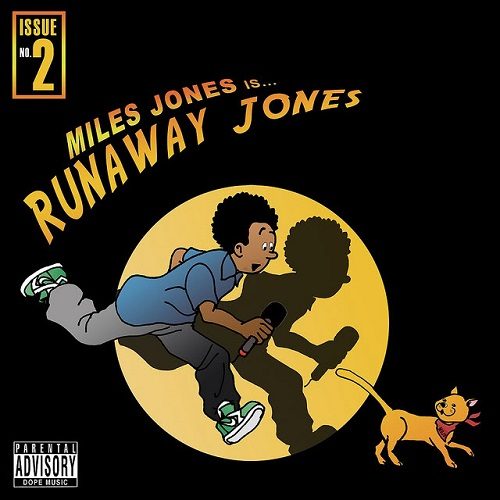 I’ve reviewed enough underground hip-hop to know that most everything written in album press releases needs to be taken with a grain of salt. After reading countless erroneous claims of artists who are supposedly scholars of hip-hop bringing a unique perspective and sound to the genre, it’s hard for me to really get excited about an album from an up-and-coming rapper until I’ve actually heard the music. Thus, when I first heard of Miles Jones, a “rising star in the Toronto hip-hop scene” and the recipient of several Independent Music Awards over the past five years, I was slightly skeptical of his actual lyrical ability. It took only a few songs, though, to put to rest my initial doubts. I’ll admit I’m a sucker for anything that brings back the golden age vibe of the 90s, but at the same time, I recognize that the hip-hop game is evolving and that artists need to branch out in order to create a new and distinct sound. Miles Jones does exactly this, blending the old school with the new school and creating an album that has elements of electronic, pop, and R&B music while still respecting the boom bap feel of hip-hop’s roots.

Jones wastes no time in showcasing his skills as a producer as well as an emcee on the opening track “Again,” with a vibrant soul sample to complement a heavy drum loop, and I found myself bobbing my head along to the crisp snare drum and kick. Although he produces only one other full length song on the album, the rest of the production, save for one or two exceptions, does not disappoint. Following a similar blueprint as Jones does for “Again,” Detroit artist Black Milk contributes a track with the sample-laden “Never Too Late,” and Jones spins a tale of regret over the hard-hitting beat. “Coast to Coast” has a more mellow vibe and features a laid back jazz piano and a faint but crooning vocal sample that serenades the track. On the flip side, though, Jones teams up with fellow Canadian Boi 1da, who has worked with notable artists such as Drake, Eminem, and G-Unit, to create a much more club-oriented feel on the lead single, “Never Wrong,” while still delivering insightful lyrics. The bottom line is that, whether it’s the sorrowful organ chords of “Trust Me” or the blend of jazz and electronic music on “Say What,” the nine different producers featured on “Runaway Jones” all offer something slightly different that keeps the album from growing monotonous.

This is not to suggest, though, that Jones’s rhymes are overshadowed by the instrumentals, as he has a knack for telling stories with his steady flow and strong delivery. He is well educated (his debut album “One Chance” doubled as his thesis at McMaster University in Ontario), and his intelligent lyrics concerning, among other things, his relationship struggles, his growth as an artist, and the current status of the hip-hop game make for a thought provoking listen. On “Time Machine,” over spacy electronic synths, Jones reflects on a simpler time before he was burdened with the pressures of being an emcee, rapping:

“Never thought it could happen, this rappin’ stuff
I was too used to calling labels’ bluff
And now that I see where I’m headed
And where I’m about to be, not sure this job’s for me”

“Rhyme Like This” also sees Jones take an introspective approach on the slowed down, piano-driven track, and the chorus pays homage to old school hip-hop, as he asks “Do you remember them days, and a time like this?/ When the music was fly, you could rhyme like this.” “No More” also has a relaxed feel, and the jazzy vibes and authentic drum sounds are reminiscent of something off a Roots album. Jones does his best Black Thought impression, as he spits:

“Lost anticipation of this hip-hop nation
Fortified live to cause mass devastation
Recession, depression, to max inflation
I paint a perfect picture use the verbal animation”

By now, it’s clear that Miles Jones isn’t just your average emcee trying to break out and make a name for himself, and his well-versed lyrics and distinct production style, combining elements of old school hip-hop with electronic and R&B music, separate him from the rest of the pack. One or two tracks are a little too club-oriented for my liking, such as “Runaway,” with its steady kicks and driving synths,” but this does not change the fact that, on the whole, “Runaway Jones” is an enjoyable and refreshing listen. Jones has already garnered significant attention and praise in Canada, and, if all is right in the hip-hop world, it will only be a matter of time before the same happens in the US. Fans of both old school and new school hip-hop who are looking for something more intelligent than a majority of the albums that pepper the mainstream market today should not hesitate to check out “Runaway Jones.”