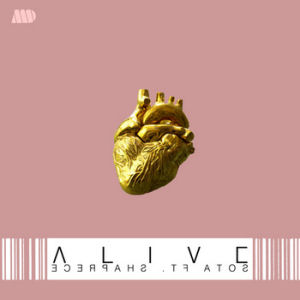 State of the Artist :: Altered State

State of the Artist is a Seattle trio eager to join the relatively few rap acts from their hometown to make national waves, but I’m willing to forecast that their new EP “Altered State” isn’t going to do it. Over seven tracks and twenty-eight minutes, it generally goes from bad to worse, with increasingly aimless raps and irritating electronica. Opener “Alive” is innocent enough, an expansive-sounding track built on tense pianos and strings with a dramatic hook. The rhymes go absolutely nowhere, but the track is still tolerable:

“If this is tongue-in-cheek, so much the best
And I don’t ever sleep so good luck to the rest
Success is a mother so I suck the breast
In order for a couple bucks just to buck the stress
Yes, I have heard about more and less
If less is more I’m tryin’ to live poor, unless
That ain’t the path that fortune sets
‘Cause you try to deviate, it’s unfortunate”

State of the Artist’s rhymes are decently-constructed and vocalized, but they have absolutely no continuity, composed of aimless meanderings that lends minimal effect or memorability to the listener. There are no themes or concepts, and they remain at a high level of abstraction tending toward clichÃ©s rather than personal accounts. I’m not sure if their theme-less stream-of-consciousness is meant to impress as artistic, but in fact it has the opposite effect: they rap about absolutely nothing.

The thing is, musically it’s actually worse. “Altered State” is a wash of mechanical synths, bad hooks, and autotune. If I’m ever called upon to brainstorm new torture techniques, “I Think I Love You” will be pretty high on the list, a mind-numbing track that sounds as if it were produced by a four-year-old. Again it’s unclear whether their rhymes are meant to be so bad it’s ironic, but either way it’s unlistenable, and I haven’t even mentioned the Ke$ha wannabe on the hook. The other thing is, for music that’s clearly intended for a club setting, it’s not danceable in any manner I can imagine. “Die by the Gun” is a painful wash that feels like a drug-induced flight through a hipster club, and while “Give to Get Some” is one of the better tracks musically, lyrically it’s intellectually insulting:

“I see you over there hater, hatin’
Actin’ like a traitor, perpetratin’
Judas, Caesar, Brutus
I could get mad, start screamin’ like, ‘How could you do this?’
I’ma cool it, like a fan do
And all of the screamin’, I let the fans do
But it’s like they hate on our rise
It’s like they can’t see our vision, guess they ain’t got our eyes”

The dumb boasts and swagger are tiresome over just a track, irksome over an EP, and, I imagine, intolerable over a full-length. If this is indeed the State of the Artist in 2011 then consider this a eulogy for art.