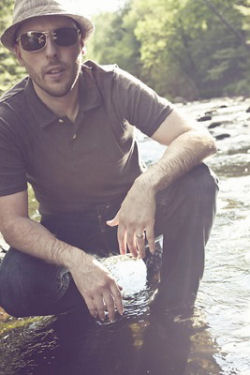 A gravedigger and the stories of the dead. Those are the topics of Adeem’s first official solo effort, The Volume in the Ground

. Don’t think of this as the former Glue emcee becoming unglued, though. It’s really an artistic effort that’s been more than two years in the making. This week RapReviews caught up with the New Hampshire native to find out more about the album, why he titled his website “winners never sleep,” and why the members of Glue decided to go their separate ways.

Adam Bernard: Your website, and record label, are titled Winners Never Sleep. This sounds like the indie, DIY, mantra. I gotta ask, do you miss sleep?

Adeem: {*laughs*} You know, I feel like I haven’t really slept well for most of my life, so I don’t really remember it enough to miss it. My wife and I had a daughter seven months ago and insomnia completely prepared me for having a child. It was great. So I don’t miss sleeping and I feel my most productive when I’m not sleeping because then everyone else is asleep and I’m awake.

AB: Having that “Winners Never Sleep” mentality, do you ever allow yourself to feel a sense of satisfaction, or are a you always going?

A: That’s a good question. I don’t know. I think that there are definitely times when I just stop because I think that I have a tendency to get overwhelmed by my own busyness. I say “winners never sleep,” but at the same time I definitely sleep a lot for someone who has a website that says “winners never sleep,” so I guess I’m kind of a hypocrite. At the same time it means just the constant drive to be better and to be doing bigger and better things and never to necessarily be satisfied with yourself until you’re done, whatever being done means, until you’re finished with your career, or whatever it is you want to do with your life. It’s all the same thing, I’ll sleep when I’m dead, winners never sleep, and so on and so forth.

AB: So winners never sleep, but they do get to nap.

A: Absolutely. It’s important to nap. Even though I’m horrible at taking naps. Maybe it should be “winners never nap,” but “winners never sleep” seemed to fit better. Where that comes from, I was in a group for a really long time called Glue and it was 2001 and when we had first come together to work on a record there was no sleeping. We were so excited to all be together and we were in a basement in Aurora, Illinois, in a basement studio, and we were just working on this music. We did this one song, it was a three part song and none of us had ever done that before. The beat changed three different times and it took a really long time to put it together and I just said “winners never sleep.” It was a joke, but we ended up calling the song “Winners Never Sleep” and that really ended up becoming the whole mentality of that project and I felt like it kind of carried on.

AB: I’m glad you mentioned Glue because a lot of people probably remember you from Glue. Why did you guys disband, and are you still in contact?

A: Yeah, we’re a family, it will always be that way, but it was life. I was getting really itchy to make more music and we’ve never lived in the same place, all three of us. I lived in Chicago for two years because that’s where the producer, Maker, lives, and the DJ, DQ, he lives in Cincinnati, so it was a lot of traveling and it was a lot of going. It was a nonstop thing. It’s a really long story, but the short of it is that we weren’t really moving. Things were not going in a forward motion anymore and I really wanted to work on this album. I had come up with the idea and originally pitched it to be the next Glue album and it just wasn’t the album that we were all supposed to make at the time. I really wanted to go in that direction. DQ was really interested in going back to school. He’s in his mid-30s and he had never finished school, so he wanted to get his degree, so he did that. Maker was DJing. We just went in three different directions. They’re actually on this album. Maker produced two songs and DQ did the intro and did scratches on another song.

AB: And the album is The Volume in the Ground

. What does the name represent?

A: It is directly related to the concept. To me it meant a bunch of things, but I was thinking a lot about how the word underground is such a cliche thing now. It’s like everybody who’s underground rap is really just selling CDs out of their mom’s basement. It used to mean something different, but I was taking that term underground and looking at it and applying it to the concept of the album. The concept of the album is about a grave digger and he can hear the stories of the people he’s burying. That’s what all the songs are, they’re different stories. A couple are about him and the rest are about the ghosts that he’s seeing and that he’s burying. When I came up with the idea, it took a long time to find that title, but The Volume in the Ground, to me, it just worked. I like the word volume a lot and it implies a lot of different things. The volume is important being applied to sound. It’s the noises he was hearing in the ground, the songs he was hearing, so it’s The Volume in the Ground.

AB: Twenty three people contributed to this effort. With that kind of a lineup is it still fair to call it a solo record?

A: {*laughs*} Probably not. It’s more like a communal record, probably. There are all these people involved and what was so incredible about all those people, a handful of them, maybe one or two of them, they paired off into who knew each other. It’s not like everybody on the record all knows each other. Because the album took so long and I worked on it for so long, I would just be meeting different people and it was wide open. I would say I met this person and they introduced me to this person and so maybe they can add something. Then that person would introduce me to somebody else and it just kept going down the line. All of those contributors are over two years’ time. I definitely was pulling strings with everybody and at the end of the day I call it a solo album because I was 100% in charge of mixing and I did that with a really incredible engineer, but every little piece came out of my head.

AB: How did you go about combining that many minds, voices, and personalities into one cohesive piece of work?

A: It was really tough. It was not effortless, at all. It’s funny, I have a publicist that I’m working with who is awesome and when she said explain the album a little bit and how it came together I had like seven pages of what happened, and Chad (Chadeo of Hunger Music Productions), who you know, was such a huge part of this. I knew what I wanted, I knew what I wanted to hear and I knew I could tell people I want it to be similar to this, or all your drums have to sound like this, or if you’re gonna gonna use electric guitar I want you to run it through an amp and put this effect on it. It took a lot of getting the beats from people when I would work with different producers and then I would basically take those beats into the studio and then I would add a lot of things on top of them, a lot of percussion. The reason there’s a ton of tambourine on the album and a lot of hand claps and a lot of stomps is because I would take a beat and I would add things that were similar. So Chad could send me a beat and MF Shalem could send me a beat and there would still be the same tambourine on it, so it was something that was cohesive. In the mixing process, too, I tried to mix the drums similar, any guitar that was on it, I tried to mix that similar. I tried to do things that made it sound more cohesive than it was in its raw state.

AB: Finally, the first single you’ve released from the album is “Meet Death with a Handshake.” Why are you so cordial with the Grim Reaper?

A: {*laughs*} I don’t know. I feel like, I think I have a healthy obsession with death, which I think is different than I’m sure a lot of other people who do not have a healthy obsession with death. I really don’t know. I think I’ve been obsessed with death my whole life because life is, it’s something you can see, you can live that. You can live life and you can talk about it and you can figure it out and you can go to therapy and you can talk to your friends and you can do all these things, but you can’t live death. You can experience death once and then never get to talk about it with anyone, other than people who have quote-unquote “near death experiences.” No one’s ever said “I died and that shit was crazy.” And it means so many things. The death of a relationship, the death of an actual thing. I try not to focus on it, but at the same time I am fascinated with it.