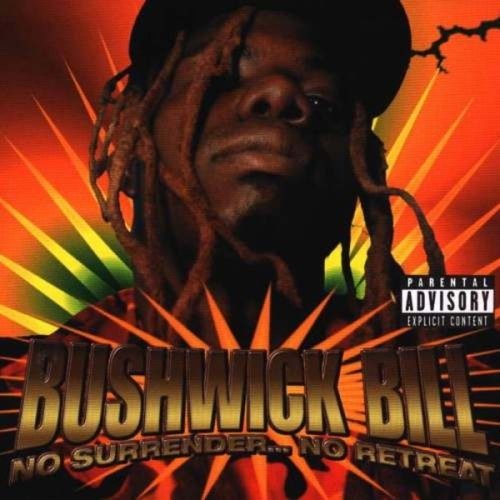 Bushwick Bill :: No Surrender… No Retreat

Falling between previously reviewed Bushwick solo albums “Phantom of the Rapra” and “Universal Small Souljah” is 1998’s “No Surrender… No Retreat.” It also falls between Bushwick’s two reunions with the Geto Boys, the last being on 1996’s “The Resurrection” and the next being almost a decade later on “The Foundation.” The album comes at a curious point in Bushwick’s career where he had publicly and acrimoniously split with Rap-A-Lot Records over multiple accusations of malfeasance, including that the label made all of its emcees sign life insurance policies naming Rap-A-Lot the beneficiary. Apparently this split also resulted in the Geto Boys being persona non grata, but that didn’t stop Bush from incorporating some Scarface vocals into this album’s third track “2 Hard 2 Test”:

“Now I have no remorse
One slip of the tongue and now we makin arrangements for your corpse
My body turns into the left field
Countin up the body count as I hear the caps peel
Now wasn’t known for eatin the flesh of the enemies
Stalkin you in packs so the killing’s done with ease
Rippin yo’ flesh now you’re only seconds from yo’ death
Feel your heart poundin while your takin your last breath
I see you sayin you ain’t scared to die
The reality sets in gun shots rings and now you start to cry
I guess you never knew how it would be
You messed up with me, now eternally you will rest in peace
You shoulda never played no games with me
You shoulda never sparked no flames with me
And now you understand yo’ life is scarred
You played a deadly game and its a shame I had to pull yo’ card”

Oddly enough Bushwick would recycle this same verse three years later for his next solo album on the song “Coming With That Shit.” Some ‘Face fans might have a hard time recognizing it as him in either case, because these vocals clearly date to his “I Seen a Man Die” era vocal tone and delivery – which is intriguing in hindsight but used to irritate the fuck out of me at the time for being so far removed from his bold “Mr. Scarface Is Back” vocal tone and hard hitting flow. At the time it was like ‘Face had found Jesus and just didn’t want to be a badass any more. Ironically as of the writing of this review Bushwick HAS found the Lord, and has said there’s almost no chance of another Geto Boys reunion ever in the future because they wouldn’t want his gospel raps on a Geto Boys album.

I’m not sure one would really want the raps on “No Surrender” on a Geto Boys album either. For a while Bushwick was a promising solo artist, launched by his memorable performances as a member of the GB crew, and the unintentional (though conspiracy theorists would argue otherwise) rise to prominence his failed suicide attempt gave him as the only diminutive statured rapper in hip-hop with a glass eyeball. Bushwick found triumph in his tragedy, telling personal stories of his own misfortune, mixed with almost inconceivably cocky tales of his sexual conquests, mixed yet again with horror movie inspired raps that arguably made him a progenitor of the entire horrorcore subgenre. For some reason Bushwick surrendered almost all of the power found in those verses to inferior and now almost entirely obscure artists like Kaos and Kyhil on songs like “My Bitch,” then turned in short and forgettable verses as if he could singlehandedly salvage a bad situation:

“I’m captivated by yo’ thighs and hips, the way you lick your lips
Take off your slip into the floor and dip, right in front of me
So steadily you wanted me to trick, but tricks are for kids
And I’m a pimp so all that little shit you did, it don’t mean shit
Now you can shake your ass and raise your hips, but I won’t flip
Because a broad like you is only good, for not shit”

It’s not the misogyny of his verse that’s regrettable here, because his female counterpart on the song does a better job of degrading women than he does, it’s that it’s simply uninspired and quickly delivered as though going faster would make the rap better. There’s also some bizarre and unexplained R&B shit going on throughout “No Surrender” that I at first suspected was meant to be a parody of tired cliched love songs. As such I was amused that Bushwick Bill would throw his hardcore fans a curveball by making hilariously bad love ballads. Slowly and sadly the truth dawned on me that this was actually a Bushwick Bill protege named Nate G who was meant to be a solo artist for a fledgling Bushwick record label that never really got off the ground. Don’t get me wrong, Nate can SING, the problem is that the words on songs like “Let’s Give Love Another Try” are pure parmesan cheese:

“Baby, whenever you need a friend
When you get a little lonely
I’ll be there ’til the end
You can always depend on me baby
You can call me up at night
Any time it’s alright (let’s give love)
Let’s give love a chance for romance
and I promise I’ll never break your heart again
(And I’ll promise to never break your heart again)
My line, my line is never busy baby
Just call…”

Believe it or not that’s actually not his corniest song – “Don’t Be Afraid” is even worse – a song which Aaron Hall should find insulting. The album devolves into something that’s far closer and much more unfortunately like a compilation album, with guest rappers like Black Bac Doe and Low Key on songs like “3 Hard Headz” that aren’t worthy of being down on bended knee to hold Bushwick’s jockstrap. Even if they were their lyrics are poorly mixed and the beat is ass. The album’s few rare highlights come on solo songs like “Tragedy,” a song where Bushwick lets out his madness like his days of old.

“Bleedin on a gurney, wishin that he shot someone else
Now you’re hit, drown in your spit, fucked up predicament
The real shit nigga
Bullet holes and pulled triggers equal injured motherfuckers
We all gon’ die, but I ain’t goin out
All y’all niggaz gon’ read about a gun battle
Headlines from M-I-A to Seattle
Readin “They killed that nigga, but he took some with him”
Family’s grievin wishin they never FUCKED with me!
Thought my baretta wouldn’t let you have it?
IT’S A PART OF LIFE SO WHY IS IT TRAGIC?!
Semi and fully automatics run the streets around here
ADDICTS AND FULL BLOWN AIDS, WATCHIN YO’ WEIGHT DISAPPEAR
and crack smoke, nigga it’s no joke
IT’S TRAGEDY!!! SECONDS FROM INSANITY”

The caps and emphasis are all his, as Bushwick literally screams these lines into the mic as loud as he can without blowing out or distorting the mix, and the fact that it doesn’t makes this one of the album’s best tracks. This is the kind of intensity and insanity that “No Surrender… No Retreat” needed, not terrible R&B songs and guest appearances by rappers who haven’t gone on to do a single notable thing in 13 years since they appeared here. Unfortunately this was a sign of things to come for Bushwick as his solo career went downhill from here, and it wasn’t until he reunited with the Boys that he finally got some of his old swagger back. Even though they can’t seem to get along a lot of the time, it’s hard to deny that there’s magic when Bushwick works with Willie D and Scarface on an album. Hopefully either they’ll change their minds about him rapping about Christ or he’ll realize he can still be born again and give a whole new kind of spin to rhyming about sin. In the meantime pass on this CD.