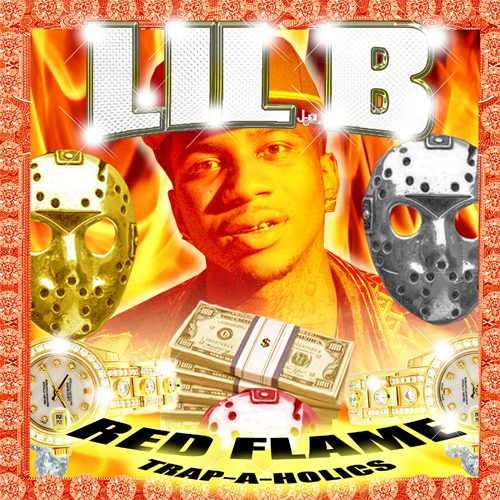 I’ve been hearing about Brandon “Lil B” McCartney for a while now, but had chosen to ignore him. I knew he was in the Pack, and I knew he was releasing more music than Lil Wayne on a meth binge, but a lot of the buzz I was hearing about him was that he was a teeny-bop rapper and not worth the time or effort. I decided to investigate Lil B after he was championed by Noz from CocaineBlunts.com. Noz is many things, but a teeny bopper ain’t one of them, so if he said Lil B is worth listening to, I believe it. I downloaded “Red Flame” from datpiff.com, and started my voyage into the weird world of Lil B.

Lil B’s Wikipedia entry claims that he has over 155 Myspace pages, and has recorded 1,500 tracks since July 2010. Doing the math, that means recording roughly five tracks a day. Which tells you that he’s incredibly prolific, and could give a fuck about quality control.

Lil B’s obvious inspiration is Lil Wayne. B is copying Wayne’s prolific release of mixtapes, as well as Wayne’s off-the-cuff, rap style. B copies Wayne’s knack for saying crazy shit that doesn’t make any sense, doing Wayne’s alien rap one better by totally forgoing any attempt to make sense at all. In that sense he can be compared to Kool Keith, another rapper who has built a career on saying crazy shit. I would draw the line at comparing B to DOOM, because while a lot of what DOOM says is crazy, he’s much deeper and more intelligent than his cartoon persona lets on.

B gives interviews that make no goddamn sense at all, coming off like a deranged schizophrenic on a methamphetamine binge. In other interviews he sounds a lot more together than his wacky rhymes lead you to believe. There is intentionality in what B is doing, and again, he’s following the Lil Wayne business model: keep your name out there, record and release every rhyme you ever spit, and get as crazy as you can. And crazy Lil B gets, approaching Charlie Sheen levels of manic weirdness, calling himself the Based God, and titling his next album “I’m Gay.” Of course, Lil B isn’t actually gay, and he explained that at the same time he announced his new album name at Coachella. And of course, it’s all a publicity stunt, like Nas’s last two album titles. Still it takes some kind of courage or total lack of caring for a rapper to call himself gay.

It’s also set off a heap of discussion over what this means for hip-hop, and whether or not this is a major turning point for rap. I don’t think that hip-hop as a genre will ever be very hospitable to gays, and a straight rapper’s publicity stunt isn’t going to change that. Sure, there are pockets of hip-hop where gays have found a home (sissy bounce, for example, or as Odd Future’s DJ). But hip-hop is ultimately a genre built on machoness and hyper masculinity, and mainstream, gay hip-hop is about as likely as mainstream gay metal or hard rock, Rob Halford notwithstanding. Come to think of it, the number of out gays in popular music is actually pretty small, so small that those who are stand out. Then again, Jay-Z had a hit rapping over show tunes, which are categorically gay, so maybe there is a chance for homo MCs.

The whole “I’m Gay” thing points to one of the issues I have with Lil B: he’s freaky, he’s inventive, but he’s not that deep. It’s one thing to say crazy shit off the top of your head, it’s another thing for that crazy shit to actually mean something. Sure, B’s got his whole based theory, which is a hip-hop riff on the laws of attraction and the power of positive thinking. Scratch the surface, however, and you begin to realize that there isn’t much there there.

So he’s great at social networking, prolific, and good at publicity stunts. How is Lil B as a rapper? The answer is, about as good as you can expect someone who records five songs a day. There is no editing, no quality control, and very little thought put into any of Lil B’s rhymes. Whatever is on the top of his head when the tape rolls, that’s what is going to end up on the track. Sometimes it rhymes, more often it doesn’t. Sometimes it makes sense, more often it doesn’t. A lot of his appeal is saying crazy shit and coming up with wacky concepts, like “I’m Miley Cyrus,” a song that works so long as you don’t actually listen to it. Then you realize it’s just B repeating “I’m Miley Cyrus” until he can think of something else to say, and what he comes up with isn’t really worth committing to tape. I haven’t heard any of Lil B’s proper albums, so maybe there is more thought and attention put into those. We’ll see when “I’m Gay” is released if Lil B can edit himself.

A typical Lil B lyric goes something like this, from “Woo Woo Swag”:

You can tell that he is making up the lyrics as he goes, not caring if they rhyme or make sense. The sound quality is terrible, with the vocals mixed way too high over the beat, and the whole thing sounds like something fourteen-year-old boys would do when they were ganked out on too much sugar and/or weed.

The beats are decent throughout, a step above the standard mixtape beat. He has a penchant for using left field samples, like the Andrea Bocelli and Sarah Brightman sample on “New York Subway.” Lil B even handles a couple tracks himself, including the electro “Like A Groupie.” While the beats are decent, the sound quality sucks. B’s voice is almost always mixed way too high, adding to the tossed off and half-assed feel of the album.

I understand the cult of Lil B. He’s prolific, he is a mastermind at using social media to connect with his fans, he’s a good-looking guy (no homo), and he is an inventive rapper. I’m probably missing the point to suggest to him that he concentrate more on quality than quantity, but in these busy times, the most valuable commodity is time. Lil B has no respect for the listener’s time. If he did, he would edit himself, he would take his time with his music, and only release tracks that were fully formed and fleshed out. Instead he puts out anything he can commit to tape, forcing his fans to sort through hours of garbage to find the moments of brilliance. If he really wants to connect to his fans, respecting them by only releasing quality music might be a good step.