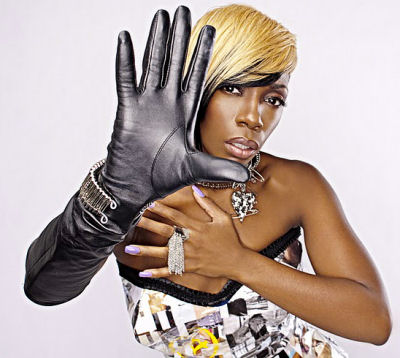 Here are two facts about Bad Boy – they’ve only had a handful of female acts in their history, and Diddy has made himself known as a solo entity. This is what makes Kaleena such an original when it comes to both Bad Boy and Diddy. Not only is she the rare female artist on the label, but she’s also, along with Dawn Richard, in Diddy’s group, Dirty Money

. Add to that the fact that the Philly product has Russian Grammys to her name, and you have a woman with a resume that’s unlike anyone else’s. RapReviews caught up with Kalenna to find out more about her long winding journey, which has included meeting Harry Belafonte on a train, and hangin with Grace Jones at 30,000 feet, and what she did to Diddy that no one’s done to him in a very long time.

Adam Bernard: There’s an interesting note on your Wikipedia page that I have to know whether it’s true or not, it says you’ve won four Russian Grammys.

Kalenna: It’s actually three. Tell them I appreciate them for the extra one, though. {*laughs*}

AB: How does a woman from Philadelphia, PA, end up winning Russian Grammys?

K: My father was in the army, so we traveled the world a lot, so I was very cultured from a young age, so I always found interest in international artists. A friend of mine from Africa told me “I have an opportunity for you to work with an artist from Russia, his name is Timati.” I said “cool.” I became really close with a good friend of his named Mariya. We did some things together and Busta Rhymes ended up getting on one of the records and the record blew up and I found out we won the Russian Grammy at the Puerto Rican Day Festival in New York. That was the first one. Timati called me back and said “I really want you to work on my album and write the majority of it,” so we went hard on the album and I did some of his biggest singles there and now he’s starting to move into the UK lifestyle, too. Europe is starting to accept him. It’s just a blessing to be able to do that. I kind of fell upon it because it’s just my culture and my life and my interest in international artists.

AB: So being an army brat has paid big dividends.

AB: You’ve written songs for a number of high profile artists. Do you have any interesting stories from working with those artists?

K: You know, I do. It’s so odd, I remember before I even got my Christina Milian placement I was on the train on my way to work with JC Chasez and I was working with Rich Harrison of Richcraft Music, this had to be back in 2001, and on my way there I met Harry Belafonte. He gets on the train, he’s with a bunch of businessmen and he’s doing real hardcore business. I walked up to him and said “I don’t mean to interrupt you, but I want your autograph.” He said “what do you do?” I said “I’m a singer/songwriter and I’m planning to be the next big thing.” He looks at me, signs my autograph and says “next big things come and go, so good luck.” That’s harsh. I got walk to my seat and I’m like wow, all my dreams were just crushed, but then he takes his time to walk back to my seat before he gets off at his stop and he lets me know to strive to be the best and the greatest and never try to be the next big thing.

K: From there my second placement was with Aretha Franklin and Fantasia, and Charlotte Church, one of the greatest young opera singers in the world, so the resume began to grow and the genres were amazing. I wasn’t just R&B/hip-hop, I was opera, I was pop, I was soul. It was just the start of so many stories to come. Being in the studio with Grace Jones, that was amazing. For her to be on the song that I wrote about all of my frustrations writing, being away from my son and being away from home, it was just amazing to have Grace Jones on that emotion at the time. How we met is funny, too. We were on our way to Brazil for Fashion Week. I met her in the airport and she ended up waking me up maybe seven hours into the flight, because it was a 17 hour flight, and she wakes me up and she’s like “bitch, we’re going shopping.” I’m trying to figure out where we’re going shopping on the plane. She found a flight attendant with a book of jewelry and we’re shopping out of the book, drinking wine.

AB: So Grace Jones had you looking through a SkyMall magazine?

K: Yes she did, but it was from a high end jewelry line. Hand crafted art from around the world. It was crazy.

AB: Now you are one third of the group Dirty Money. How did the Dirty Money situation come to be? It sounds like you were spending time in every country except for America.

K: After I had my son I promised him and myself that I would always strive to be the best and give him everything. I want to say no more than a year after I had my son I decided to go and get a publishing deal. I called Big John and told him I was ready to sign and he signed me. I was going hard and they were like “you’re like Diddy, you don’t sleep, you work so hard and you believe it.” That was something we had in common, so Big John thought it would be a good idea to work on Puff’s project. When I got in there I was just being me. I was glad to be able to be in the presence of such a genius, so we hit it off right from the beginning. I was just writing on the album, I didn’t think anything of it, I just wanted it to be great. I remember asking him a couple days before I left, “who are you going to use for this group, because this album is going to be amazing.” He was like “I’m not sure, maybe somebody I already have signed.” He asked about my solo project for months. Time went on. I finally left.

K: I’m walking through the airport and I get a call. It’s 4 o’clock in the morning, I had to catch a 6 o’clock flight, and he was like “I know it’s not proper protocol, but I want you to be in my group.” I said “no problem, I’ma definitely give it some time and think about it over the weekend.” He was like “who puts Diddy on hold? I need a yes or no.” I was like “trust me, I’m gonna call you Monday.” It was Friday. I called on Monday and said yes. I thought it would be a great opportunity to learn and to even fine tune my craft. I’ve been sitting back and watching. A lot of people, I think, read that and they misconstrue my personality and they think I’m the one who doesn’t know what’s going on, I’m the quiet one. I am the quiet one because I’m taking it all in because I felt like I knew so much but the things that I knew have only gotten stronger and I’ve learned so much more. So I’m ready to do my solo project now.

AB: With songwriting you can write for a plethora of artists and not have to deal with all the hassles of being a recording artist. Why voluntarily jump into the latter when you were having a great career writing?

K: I still have a great career writing, and I thank God for that, but it’s the pursuit of happiness. No one can deliver your soul’s emotions better than you can. Even if I write a record for an artist, they have to duplicate what I’ve done already. I write the record and I demo it and they have to duplicate it. They’re trying to do what my soul was speaking from the first place and nine times out of then it never comes out as awesome as the demo. I knew from a very young age that being an artist and being able to share my story with the world is almost like being a pastor, or a professional lecturer, you write your own essays, or your own speeches, and you speak them. It’s my own pursuit of happiness. It makes me happy for people to understand where I come from and know what my soul is trying to say to them.

AB: There haven’t been a lot of women on Bad Boy – Kim, Faith, Total, Dream, Danity Kane. Where do you think you fit in the lineage of female Bad Boy artists?

K: I think I fit in on a level where I’m in a group with Puff, so it’s almost like it goes to a different level, it’s a different standard, we’ve made history. Dirty Money is always going to be a really big part of what I’m doing. I’m not sure what the future holds for me, or where home will be, but I know that Dirty Money is an amazing part and puzzle piece in my life. Just that alone, just being in a group with Puff, that’s a new chapter and I’m honored to be a part of it, to be able to say when you’re talking about Puff and he’s doing his VH1 story, I’ll be a part of that. They’re gonna talk about me and say wow, Kalenna was a part of a group with THE Diddy, THE Bad Boy.

AB: And as you noted you also have a solo album that you’re working on. When does the solo album drop?

K: My wish is for it to drop at the top of the year. I don’t like rushing things. I think every art takes time, so it will give me time to do really amazing features and work on some other artists’ projects and really find my niche and what I want to offer my listeners. I think I’m pretty much there, but I want to take my time to spoon feed my guys what I have to offer. I’m praying for top of the year.

AB: Finally, I know you are married and have a child, so I’ll temper this question a little bit, but since you are part of Dirty Money, tell us some of the dirtiest things about you.

K: You know what, I’m really a free spirit, and I love everyone and I think everyone deserves love and I am a mom so being a mom you have to gauge and put parental guidance on what you do and how you do, but I have fun, and me and my husband love to have fun together, and I pray for more babies one day.

AB: I’m getting a hippie vibe.

K: OK now, that’s what I’m saying. As long as you’re with me and you can read into that then I’m with you.