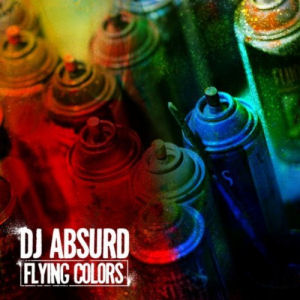 It’s common to see DJ’s turning into producers in the hip hop industry, yet only a few succeed. However, those who know the music and stay true to the sound are the most successful. New Jersey’s DJ Absurd has managed to transition smoothly from DJ to producer with influences from artists such as The RZA, Havoc, Premier, and Dr.Dre and now debuts his producer compilation EP, “Flying Colors.”

In this seven track EP featuring DJ Absurd’s beats and a wide array of guest emcees, “Flying Colors” is a compilation that brings to light this DJ turned producer. Initially released as a single, the album’s title track was enjoyed by many followers and sets the tone for the rest of the EP. Heavy orchestral strings and almost theatrical music seem unlikely for a hip hop track, but in the title track, it works well. It features Jaz-O, Copywrite, and Mela Machinko as they show how they surpass their competition with:

“Some is coming, number one is coming
Kid is buzzing like a bubble
All these bums I’m about to crumble
The hard fight dealing with naysayers
You know that I’m the greatest
More applause, no more frauds, no more enemies and fakers…
And if you test us
We pass with flying colors”

“East Coast Assault” features Ransom, Snype Lyfe & Cyssero and shows how thye represent in the East Coast while “Ain’t Hard to Find” features Dead Poets & Pacewon and calls out to haters in the music industry. Also, “Life is Hard” features Armageddon, Trife Da God & Blaq Poet while “In My World” features Termanology & Big Lou and shows the various struggles in their lives. The beat remains unique and features an nostalgic eighties sound with horns and ethereal vocals.

DJ Absurd takes his music to another level with “Slap Nerds” as they attempt to reveal the truth behind hip hop and the conspiracies that lie within the music industry. Soft keys and organs take over the beat as Craig G shows:

“Audio Evolution” is yet another stand out track in “Flying Colors” that creatively and uniquely describes the development of music from vinyl, to CDs, to MP3s. Guest emcees featured on the track are Joey Dynomite, A.U.R.C., Tone Live, and Pryme Prolifik. The track takes us on a historical music journey and shows us the direction of our “digital future.” It puts into perspective how the methods of playing music have changed drastically and also prepares us for the direction music is now headed towards.

DJ Absurd’s debut in “Flying Colors” is definitely solid as he conveys his own unique style, yet retaining the true sound of hip hop. It’s unpretentious and nothing too abstract which makes his production skills seem authentic as he never strays away from an authentic sound. His vast list of emcees only enhances the tracks and highlights his variation in beats from track to track. With the roots as a DJ, he has the strong foundation for the makings of a talented producer and with his loyalty to a bona fide hip hop sound, his talents are unrivaled.