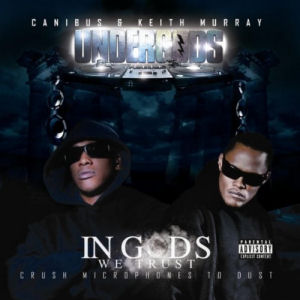 Canibus & Keith Murray are The Undergods :: In Gods We Trust, Crush Microphones to Dust

Canibus and Keith Murray are the latest ’90s New York rap tyrants to join forces for a full-length, and while the novelty of such high-profile collaborations may be wearing off, rappers should be commended for shedding egos to record dream projects for diminished fanbases. “In Gods We Trust: Crush Microphones to Dust” delivers on the promise of their 2009 EP, expanding its tracklist into an eighteen-track LP replete with guests from Planet Asia, Crooked I, Erick Sermon, and Tech N9ne. ‘Bis and Keith are in full-out demolition mode, and as Keith is the more versatile of the two, it sounds more like a Canibus project, outfitted with hardcore beats to match the lethal rhymes and lacking Keith’s normally wry humor and funky instrumentalsâ€”only “Stop Frontin'” and “Guilty Will Pay” boast Def Squad flavor. Epic horn fanfares, expansive percussion arrangements, and apocalyptic vocal bites herald their ruthless verses on openers “Rock Wit Us” and “No Brainer,” and Jake One accordingly laces “Undergods Roll.”

In addition to trading sixteens, Keith and ‘Bis sometimes do double-duty on individual verses, rapping a few bars at a time and creating an eerie effect as if they’re finishing each other’s sentences. Overall Canibus’ performance tends to be the most impressive: his punchlines are consistently fresh and his rapid, guttural delivery is more at home over the production. Still, Keith hands in a worthy performance and sports good chemistry with his fellow Undergod, as on the Erick Sermon-produced “129” which draws heavily from Biggie and DJ Premier’s “Ten Crack Commandments”:

“We been in these streets for years, it made us some animals
So it’s understandable when I make you a vegetable
Respect our rep, step by step, maniacal
Give you somethin’ you can feel, real, more tangible
Comin’ against us, you go’n have your hands full
Knocked out from the blind side like Suge
Whether freestyle or written we some mic titans
Y’all talk shit and apologize like Mike Tyson”

The Undergods theme is fulfilled on the second half, which features conceptual tracks which expand upon an epic, mystical theme such as and the sci-fi-esque “Secret Weapons” and “Rise of the Machine” and the marathon raps of “Follow El Shaddai,” which find ‘Bis at his cryptic best:

“We both agreed our weapons of metal would not be sufficient
For office, we needed spiritual lawyers
So who do we absolve then?
Who is the redeemer of all men?
These physical wars will exhaust them
We fight symbolic sorcerers with Canaanite consciousness
The masters of metallurgy metamorphosis
To be, but not to be seen, they remain anonymous
They caution us, the Stuxnet virus is formless
Army of a thousand legs defeated the serpent with a hundred heads
After the serpent laid a hundred other eggs
The gift of reproduction gave ’em the edge
In other words, through genetic cloning nothing is dead”

While few tracks stand out as particularly weak, most of “In Gods We Trust” sounds fairly similar, and some is too formulaicâ€””Torsion Fields” falls a little flat with a weaker hook and too-familiar verses. While it definitely would have benefited from some trimming of the fat, the tracks that break the monotony shine, such “Princes of Persia” with its Middle Eastern instrumentals and the ironically smooth “Gotta Be Real,” which flips a sweet sample from Deneice Williams’ “Free.” The Tech N9ne feature “Show ‘Em What Crazy Is” is a highlight, featuring all three rappers at their vicious best over heavy organ-driven production.

In terms of recent full-length collabos from New York legends, “In Gods We Trust” easily outshines recent trysts by KRS-One & Showbiz and Pete Rock & Smif-N-Wessun but falls short of Random Axe and Slaughterhouse because they fail to develop their own style as a duo distinct from their individual sounds. That said, “In Gods We Trust: Crush Microphones to Dust” lives up to its title as a dream collaboration leaving any mics in its vicinity looking like Lot’s wife.