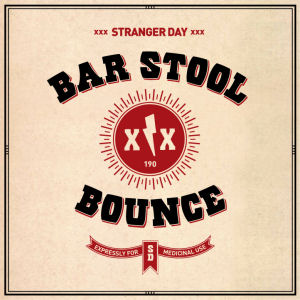 Once again feeling the desire to pull back the curtain behind which reviews are fed to you through the music industry triangle of glossy magazines, highly financed websites and billion dollar record labels, I’m offering you this opening paragraph from North Carolina emcee Stranger Day’s “Barstool Bounce” press release. This is what you get in the mail when you sit on the review side of the equation, the kind of pitch designed to convince you whether or not you should slit open the promotional CD you’ve received to review the contents within.

“Shane Coble aka Stranger Day is no stranger to the party. If there’s a gig somewhere in a city of back woods of North Carolina, you can count on this hell-raisin’, whiskey-swiggin’ emcee being the main event. Riding off the buzz of his mixtape ‘Young, Dumb & Dope’ (which has amassed 10,000+ downloads), Stranger Day is readying his first collection of songs, ‘Barstool Bounce.'”

Ultimately I was convinced to crack open “Barstool Bounce” and give it a chance, but it actually wasn’t this paragraph or the rest of the accompanying press release that sold me. It was seeing the name Emynd as the producer for 6 out of 7 tracks that did the trick, as he’s a Philadelphia based producer who made his name working with the likes of Reef the Lost Cauze, Diplo, Gucci Mane and Lil B(#TYBG). So sure, why not take a chance on Stranger Day when he’s got Emynd backing him up musically? There’s at least a fair chance that even if he was terrible lyrically the music would be aight and this wouldn’t be a review I’d regret assigning to myself.

“Another bottle, another drank
Doin what we want, fuck what you thank
We be doin us, leanin off that buzz
East coast cousin with the rise of the sun
Get up get out and do somethin somethin
Get down get loud who want it, want it
come and get it, cause we got it
Runnin with it, no use in stoppin”

It doesn’t take long to glean from tracks like “What We Want” that Stranger Day is the NC variant of Las Vegas rapper Big B, an emcee with a slight melanin deficiency and a penchant for partying that endears him to an otherwise potentially skeptical audience. Big B has supplemented his underground following through charismatic live shows and gruff singing, leaning him a little more toward the Everlast side of things; Stranger Day has supplemented his by going a little more twang and a little more Southern rock in style and accent if not crooning. It’s not hard to imagine that “Not Playin'” could crossover mainstream:

“Yeah I’m ready to rock, on this dusty road
The +American Dream+, Dusty Rhodes
Wrestle with that, puff on this smoke
In the chopper with Merc, crush the SoCo
Bourbon like rush to the touch of so-ul
Southeast livin, love, that coast
Rep my home wherever I go
We gon’ get it now give it all I really can
Until the very end, from here to Philly man”

Shane Coble cites his influences as ranging from OutKast and Cash Money Millionaires to Company Flow and Hieroglyphics. That’s great and I applaud the diverse range of music that he checked out in his youth coming up, but in the thirty minutes of “Barstool Bounce” I’m having trouble picking them up. Songs like “Turn It Up” and particularly the rock and rolling “Stranger Day Wasted” don’t suggest the melodic metaphors of Andre 3000, the fast and intellectually complex syllables of El-Producto, or the intricately woven lyrics of Opio. Over and over again the closest to kin I can think of when listening to Stranger Day is the Kottonmouth Kings – not very profound but possessing a basic grasp of how to flow well and make songs about drinking and smoking. Stranger Day would fit in perfectly on a Suburban Noize tour and I wouldn’t be surprised to see him on one soon but I can’t say that “Barstool Bounce” is a revolutionary release in any way.