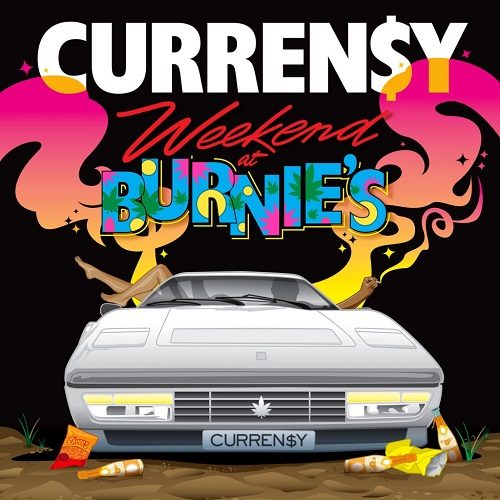 A number of mixtapes, two independent albums, and now the major label debut. But it ain’t Wiz Khalifa, it’s fellow stoner and frequent collaborator Curren$y. Spitta fans will not like the comparison, but while Wiz Khalifa met the challenge and is one of the most prominent rappers on the scene with two platinum singles (“Black and Yellow,” “Roll Up”) and a gold album (“Rolling Papers”), Curren$y fails to rise to the occasion with “Weekend at Burnie’s” for Warner, the same label Wiz once had to obtain his walking papers from to get to where he’s at now.

This is not to suggest that Curren$y should start singing over synths or deliver some type of anthem, but simply that stepping to the next level on the business side of things should result in something of a higher profile. But Curren$y rather keeps it low-pro, all the while still basking in his splendid JETS lifestyle. The problem here is that not only is no progress made, “Weekend at Burnie’s” might just be an artistic regress.

Monsta Beatz and Rahki provide the lush and lavish soundscapes you’ve come to expect from a Curren$y project. Still this may be the most commonplace collection of music contemporary Curren$y can be heard on. Compared to the two volumes of “Pilot Talk,” there is notably less artistic substance behind “Weekend’s at Burnie’s.” Boasts about “detailed lyrics far too intricate to be made up” are irrelevant if these lyrics can’t engage interest. When Curren$y quotes Slick Rick, he only conjures up footsteps he’s simply too small to follow in. Having two underperforming weed carriers (Young Roddy, Trademark) on every fourth track doesn’t help matters. On this LP, Spitta is just another rapper failing to deliver on promises. “Scribble in my notepad ’bout my city’s wrongs / and I try to make it right through these songs,” he says on “On G’s,” but I don’t hear anything about a city’s wrongs. And that any of these songs could right wrongs is pure rhetoric. Instead I learned that rap might just be the easiest way to make money: “Stackin’ rapper chips / rhyme a few bars / to buy my homies some cars / then I say a few poems / and buy my moms a new home.” Meanwhile the listener can’t help but feeling cheated as the rapper discloses, “Got you wonderin’ if I played my best hand yet – you ain’t seen nothin’.” So what do you think is the appropriate time to lay your cards on the table?

Redeeming moments on song level come with “She Don’t Want a Man,” where Curren$y puts his emotional intelligence on display when describing an affair with a married woman, the contrasting combination of passionate raps and airy production on “Money Machine,” the Beats By The Pound flashback “One Life,” and the Fiend duet “Televised,” where the two ex-No Limit Soldiers spark nothing less than a “reeferlution”:

“My diesel East Coast, my kush is Western Conference
Chronic, nothin’ but the bombest
To the elitest of rhymers and beat designers
You smell these trees leakin’ through yo equalizers
A boss on them RAWS, though I started with them e-z widers
OG Daytons, nigga, not them eagle wires
A couple niggas from the old block mad
so when I visit I park my low-low in the grass
to keep a eye out
Smokin’ one for the homie on the mural as I ride past
If I was drinkin’ I’da poured some wine out
Knockin’ “Frank” – Amy Winehouse
Candy paint on my sky box, tell a square bitch ‘Watch out'”

“Rolling Papers” was a well rounded rap album fit for this era where rap and pop are moving closer and closer. “Weekend at Burnie’s,” while providing easy listening, isn’t eager to please, even as Curren$y is convinced that his music has a wider appeal (“What you tryina hear when you high / what you wish they played on the radio at least one time”). There are plenty who can appreciate this attitude. To them the fact that the NO native does his thing regardless of who’s providing the platform only bolsters his credibility. There are others who see the delicate balance between quantity and quality Spitta has maintained so far at risk.