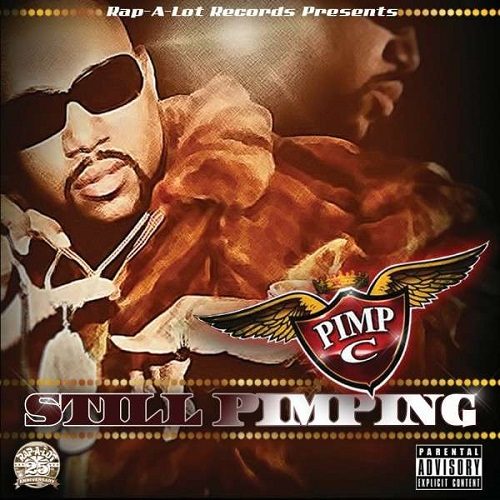 So here’s the score. Last October I reviewed “The Naked Soul of Sweet Jones,” which was believed to be the final album of Pimp C material. I went through this whole rigmarole about how the idea of posthumous albums in hip-hop has always been a touchy topic. Making note of artists like Big L, Big Pun, Eazy-E, Ol Dirty Bastard, Camu Tao and of course 2Pac & Biggie, I mentioned how there are seemingly two extreme stances on the matter…people either hate it or love it. For the most part, I found “Sweet Jones” to be an entertaining and interesting listen when taken at face value. I wasn’t too keen on the features of Young Jeezy and Drake though, and I’m glad that neither one of them found their way onto “Still Pimping.” In fact, the title of the album itself speaks volumes without even trying. Prior to its release, Pimp C’s widow Chinara Butler and Rap-A-Lot Records were embroiled in legal proceedings over master recordings of and compensation for the songs that ultimately would become the album’s tracklist. I’m no legal expert by any means, but the album was released, so I’m going to go ahead and make this conclusion: Money talks.

On the music side of things, “Still Pimping” features multiple appearances from Bun B, Slim Thug, Smoke D, Paul Wall and Da Underdawgz, along with Too Short, Lil Keke, Big K.R.I.T., Killa Kyleon, Cory Mo, Hezaleo, Brooke Valentine, Vicious and C-Bo. The album kicks off with a short instrumental called “Pimptro” before getting into “Watch The Reaction” which features Killa Kyleon and original Screwed Up Click member, Lil Keke. Since Big K.R.I.T.’s emergence into the national spotlight, fans and critics alike have always compared him to Pimp C. So how would they fare on the same track together? Well, I’m not sure if it’s by design or just happenstance, but “Grippin On The Wood” is easily one of the standout tracks on the album. Everything seems to flow so smoothly on the song, from the production to the hook to the verses. The only thing that possibly would have made it better would be if Pimp was actually alive for it all. In 1998, Scarface’s “My Homies” dropped. The double album featured the popular song, “Fuck Faces.” Here, the beat and hook are recycled for “Finer Things” with guest appearances from Slim Thug and Brooke Valentine. Pimp C puts his own twist on The Isley Brothers’ “Choosey Lover” on “I’m So Proud Of Ya” while expressing his appreciation for his down ass broad for choosing him. “Bread Up” is definitely another standout track on the album. It features guest verses from DJ B-Do and Paul Wall, who claims to have money “longer than the inauguration guest list.” We find Pimp talking big shit as only he can, as he raps:

“Now it’s Bentley 4-doors, gettin’ 50 for the shows
Bring ya bitch around me and I’ll make her get exposed
Bend over touch your toes, girl show me what you got
I’m really tryin’ to see you, but you went and shaved your cock
Why in the fuck would you do that shit?
Sweet Jones ain’t fuckin’ with that bald head shit
Biiiiiiiitch!”

Too Short slides through and contributes guest vocals on “Fuck Boy” a diatribe against those who claim to be real but really aren’t and are likely to be exposed for the frauds they are. Pimp dedicates it to all the “step daddy ass niggas.” The track for “What You Workin With” seems to be just a bit busy for my tastes and sometimes has a tendency to drown out Pimp C, Bun B and Slim Thug, but then again that could just be my shitty headphones. The wailing organ and guitar on “Like Us” sounds pretty damn good, but the track is so long that after Smoke D, Vicious and C-Bo are finished, you’ve forgotten about the opening verse from Tony Snow. “Notes On Leases” and “Hold Up” leave a lot to be desired and the album closes out strangely with “Gorillaz.” The only trace of Pimp C on this track is a repeated hook of “Gorillaz in my trunk, ain’t no nigga out-bassing me.” To be fair, the album starts off fairly strong, but as it continues, it seems to run out of steam in the final stretch. Diehard fans will undoubtedly be interested in hearing some new Sweet James Jones, but this is certainly not the starting point for newbies to the sounds of Pimp C.