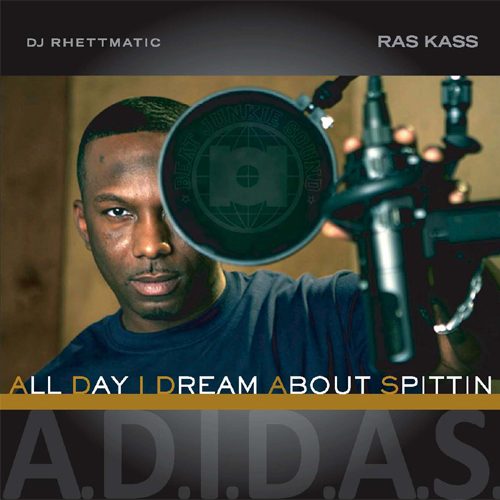 Even when you’re covering hip-hop releases on a constant basis like RapReviews.com does and has done for many years now, there will always be the ones that get overlooked. Regular visitors have surely wondered about the site’s selection process, and while various factors are involved in that process, there are two patterns that may just get to the heart of the matter. One is the dÃ©jÃ  vu. You have artists who have been going down the same road for years. With them there inevitably comes a point when critical minds will run out of things to say. A second pattern is in effect when the things you’d have to say are best left unsaid.

The reason I’ve still come around to reviewing Ras Kass’ “A.D.I.D.A.S.” – an acronym for “All Day I Dream About Spittin” – a year or so after its release in digital format and six months after it came out on CD is that I feel that when a much lauded rapper such as Ras Kass puts out product, it should not be ignored, even if the two aforementioned reasons so far prevented me (and possibly other staff members) from covering “A.D.I.D.A.S.” To cut to the chase, the version at my disposition, the physical release “A.D.I.D.A.S. (Relaced),” is an often below average, frequently terrible, rarely solid double-disc offering from a rapper whose standing is mainly based on his debut album (“Soul on Ice”) and an unreleased one (“Van Gogh”).

As of late, Ras has been trying to rally sympathy for himself with slogans like ‘Save the Ras Kass’ or mixtape titles like “Endangered Lyricist.” Now we’re all well used to point fingers at the dark side of the music industry, but when rappers with potential continuously underperform, they are the ones to be held at fault for their failure.

The failure that is “A.D.I.D.A.S.” has many facets. This is an album that is able to create the illustion that it’s 2001 all over again when you encounter tracks with the sound quality of a RealAudio stream (“This Shit Right Here”). But even a richer and clearer sound can’t prevent other beats from being unbelievably bad. “Dexter,” “State of the Union,” “Heatwave,” “3008” – they essentially just represent varying degrees of wack. I hesitate to put the producers on blast because the mastering has evidently been neglected, affecting even contributions from experienced beatmakers like Mr. Porter, DJ Babu and DJ Rhettmatic.

A handful of tracks has adequate audio, such as The Alchemist’s “Linguistics,” Evidence’s “Beautiful Grind,” DJ Rhettmatic’s “Release Yaself,” and Hazardis Soundz’ “In My Lane.” Two tracks stand out because they succeed at the incorporation of synths (which can’t be said for the rest of “A.D.I.D.A.S.”). Gilde’s title track combines planar dancefloor keys with Run-D.M.C.’s “My Adidas” drums, and J. Bizness laces “Scenario 2012” with esoteric synths while maintaining the original’s stuttering rhythm section.

The lyrical side of the scale arguably weighs heavier for Ras Kass’ audience, and while he does have a way with words, I would like to ask every rap connaisseur: Is the Ras Kass of “A.D.I.D.A.S.” your definition of an accomplished MC? Can you point me to one top-to-bottom quotable on these 22 tracks? Does he ever raise above the mostly mediocre music with an outstanding flow or verse? Does he bleed the vitality and artistry of a Pharoahe Monch, Killer Mike, Saigon, Brother Ali?

If you write a song called “Linguistics,” according to which you’re “a perpetual libarian,” I have to ask you, what exactly does a libarian do? Could it be you meant LIBRARIAN? Conveniently, he has the sarcastic retort ready a few lines later: “Arrogant, I’m a stupid American.” A rapper in better shape would make sense of such contradictions, but instead Ras Kass wanders aimlessly about, planting some quasi-clever wordplay here, an ironic commentary there. He’s at the center of a pocket universe named hip-hop and does nothing to make that universe seem remotely interesting. (Even considering the occasional lip service to hip-hop’s glorious past and potential to liberate and unify.)

Some things just don’t go together. You cannot demand “I expect rap to evolve” and in the same breath complain that hip-hop is now used “to promote homosexuality – or at least sexual ambiguity.” Either you want rap to evolve and thus naturally widen its horizon, or you’re content if it sticks to clichÃ©s and prejudices. Featuring your offspring is always a nice touch, but letting the title (“Me & My Twins ’05”) be inspired by a song called “Me & My Bitch” is somewhat odd to say the least. If your past efforts have proven that you are not a club rapper, why do you persist with “Mr. Right Now,” “3008,” “On Top”?

“I was destined to do great things,” Ras ponders on “Beautiful Grind” (a track where he manages to be outshined by Evidence). He clearly was. Yet at least to this critical mind these great things haven’t been that numerous.