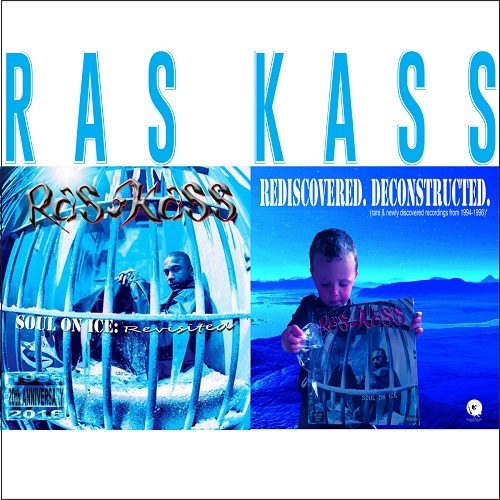 “Furthermore, carnivores don’t want beef with me
Like a Gracie, I choke a nigga out with his own gi
My name is R-A-S, K-A-double-S
Take it to your chests like breasts
And yes I signify the West
No doubt…” – “Guru NYC 96”

I debated whether or not to consider this a new release or some form of Back to the Lab review, but the subtitle of this album is “Rediscovered. Deconstructed.” and that does factor into the final decision. It’s possible you’ve already read one or both of our previous reviews of “Soul On Ice” either as originally released on Priority Records or the bootleg underground demo version which can arguably be said to have inspired this more official release. The final piece of evidence which tipped this toward being that new new for a review view was the fact that with all the extras and remixes packed in, “Soul On Ice: Revisited” clocks in 20 minutes longer than the Priority LP.

There are some undeniably dope improvements on the original to be found within the “Revisited” release. Although “Etc.” had some of the fiercest lyrics to appear when Ras made his major label debut, lines like “I could come/cum the f%$# off with a vasectomy,” the Lamont ‘Bird’ Holdby and Ras Kass produced beat was a little underwhelming. Giving this song Da Beatminerz remix treatment and adding Joell Ortiz to the hook makes the song much more of a head nodding thumper you’d be proud to blast in your stereo. The biggest knock most people held against “Soul On Ice” back in 1996 was that they didn’t like the production even if they thought Ras Kass was an ill emcee so it’s clear the “Deconstructed” aspect of the subtitle is taken to heart here.

Some songs absolutely DON’T need to be deconstructed and rebuilt though and I’m very glad to see they were left alone. There’s absolutely no way that anybody could have made the epic track “The Evil That Men Do” better musically or lyrically, produced by Vooodu and spit by the one and only John Austin IV. It was one of the most thought-provoking and cinematic songs of the original album, a showcase for a rapper who could snap punchlines with the best of them but also wanted to show us his chops as a writer and storyteller too. Even now the song still holds up in every single respect.

“Since I never used jims I left a seed in the Earth
that left a nigga feelin like dirt
Cause now I’m a father, and got a two-week old daughter
Ironically, don’t even know her name it’s a damn shame
And ol girl never told me she was havin my baby
The more I thought about, she fuckin played me
Cause the family’s lookin at me like I raped her
Plus with another fuckin mouth to feed I need paper
Did a caper, and took my Guinness Stout to the head
September 1990, drunk drivin, the light turned red
Somebody hit me from the rear, I hit the brakes
Then lost control of the steering wheel
Hit a black Camaro and that’s all I remember that night…
I woke up to a five-oh flashlight”

Now for the bad news. If you were hoping that “Remain Anonymous” was on this release since that was the 12″ single that put him on the map back in the 1990’s, even this “Revisited” version of “Soul On Ice” doesn’t include it nor the flipside “Won’t Catch Me Runnin.” Maybe the original master tapes no longer exist, or maybe the sample clearances are too expensive even now, but I can’t feel like Ras’ wouldn’t want to represent them if he could since they were recorded in the same era as both other versions of “Soul On Ice” we’ve discussed. That’s not to say some rarities aren’t included on here though, tracks like “Jack Frost” that didn’t make the cut due to a Nat King Cole sample. I guess the costs on that one finally came down enough. I can’t imagine it was the Nas “It Ain’t Hard to Tell” scratch that was the hold up.

There are also some unexpected gems that unlike “Jack Frost” were not even on my radar as a decades long aficionado of Mr. Austin, such as the “Guru NYC 96” track that I opened the review with, which we can guess happened sometime between September 14th and December 31st of the year given Ras chastizes someone in the audience for “disrespecting the dead” by asking him where Tupac Shakur is. Either way it’s a double gem since it also includes a freestyle from the late Keith Elam, who seems to have been playing host to a showcase for Ras Kass that evening.

The album also includes the original unreleased version of “Miami Vice,” as it seems the label asked him to change the song’s title and hook to “Miami Life” to avoid any possible dispute with NBC. The track’s pretty much the same but it’s good to hear it the way that Ras Kass intended it. The excellent Diamond D “Soul On Ice” remix that was originally released as a vinyl single gets included, and some absolutely new to me material like “I Lost Heaven.” Maybe the track comes from the era, but to my ear it has a different quality, like Ras Kass was older and/or working in a completely different studio. The track’s tight though so it doesn’t really matter where it comes from. These additions make “Soul On Ice: Revisited” worth copping even if you own the original, and songs like “Nature of the Threat” are still as controversial as they were then. Hearing it with 2017 ears it’s hard to dismiss how vitriolic it is, but the one thing Ras Kass has never been is censored in his opinion, and though I don’t always agree with him I ALWAYS appreciate the ferocity with which he says it.