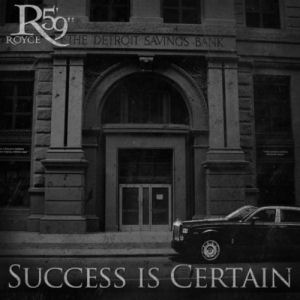 Royce Da 5’9″ is – as things stand – one of the best rappers on the planet right now. He’s in the midst of a run of form that can no longer really be called that – virtually everything he spits is superb, his flow is the perfect mix of old and new school, the punchlines are vicious and he has enough subtlety as an artist to complement his near-superhuman confidence. It’s also interesting to note that, although he’s had ups and downs throughout his career, that’s not really reflected within his body of work – if you look at all the Royce albums, mixtapes or collaborative EP’s (I quickly scanned twelve on this site, though may have missed some) and look at the scores, every SINGLE one scores between 7.5 and 8.5. Seriously. Even if you happen to query a few scores, it still shows that, over the course of a decade, Royce has displayed incredible consistency. And that’s not even counting his work with Slaughterhouse, or the brilliant guest verses on other albums (“Motown 25” on Elzhi’s debut LP is still possibly my favourite hip hop song from the last 5 years).

“Success Is Certain” is smack bang in the middle of a wonderful 2011 for the Detroit native. Yes, releasing around the same time as “Watch the Throne” has relegated the marketing for the album as virtually nonexistent, but now that the dust has settled on Jay-Z and Kanye West’s “joint joint” it’s time to give Royce the shine. After all, Bad Meets Evil beat the Roc Boys to the punch and – in many people’s eyes – possibly delivered a more natural and organic listen (mainly owing to the long-standing and genuine friendship of the Evil Twins). His last outing, “Street Hop,” was very strong but overlong. He seems to have taken it on board, as “Success Is Certain” is a mere eleven tracks long. The result is an extremely tight listen, where each song delivers the good and there aren’t really any tracks you need to skip. It’s also vaguely in keeping with “Hell: The Sequel” in tone (certainly in the first half), and, although concise, it’s an extremely densely packed opus.

It really took a couple of spins to absorb everything, as the consistency masks the lyrical gems and, rarely nowadays in hip hop (let alone Royce’s career), pretty much every beat syncs perfectly with pretty much every chorus. They are the kind of beats that, if heard on their own, wouldn’t be necessarily impressive – but when combined with the chorus/verses, it all just fizzes with vibrancy, accuracy and strength. The more you listen, the more you start to realise that this is a rapper who is simply on top of his game, and it even acts as an impressive companion piece to “Hell: The Sequel.” Things kick off in style with an instrumental similarish to “Sweet Child of Mine” – the guitar soars over Travis Barker’s drums, and Eminem combines well with the Futuristiks to produce the perfect opener. Marshall pops up on the next number – though only on chorus duty – and “Writer’s Block” displays Royce’s I-don’t-give-a-fuck attitude perfectly (he even takes a subtle shot at 50 Cent). It’s basically a Bad Meets Evil joint, and Royce just rips it all to shreds. No surprise there.

Nottz laces the bizarre but brilliant “Merry Go Round” where 5’9″ starts to express his personality and life-story in more depth. It’s fascinating to listen to, and the catchy (almost country music) chorus initially seems out of step with the rest of the LP, but it ends up fitting in well. Back to the “fuck you” attitude on street banger “Where’s My Money” (pretty straightforward), and it’s followed by the concept number “ER” (which is slightly similar to “Dr. Carter” in fairness) that features Kid Vishis. Nottz goes all emo during “On the Boulevard” – it’s probably one of the best beats, one that could have comfortably fit on “Recovery,” and Royce continues to pour his heart out. It’s welcome tracks like this that combine superb flows with a real emotional connection, helping to pull the listener into his world (something that Nickel Nine hasn’t always done so willingly).

The excellent Alchemist banger “I Ain’t Coming Down” (complete with a great hook) is possibly one of the most confessional numbers, with the wonder multisyllabic wordplay taking a back seat, whilst Royce releases his cathartic verses, admitting his errors. More trips down memory lane on the heartbreaking “Security” (you just have to hear it), before that old warhorse DJ Premier (who executive produced the album) pops up behind the boards for the sublime “Second Place.” In fairness, whenever the two combine, it’s resulted in pure gold for over a decade now, and it doesn’t seem like stopping anytime soon. The weakest joint is also the penultimate on “Success Is Certain” – featuring Joe Budden, on a club track and. Wait, come back, it isn’t THAT bad! Alright, “On My Planet” is decent enough, but just seemingly out of place, even if it does help lighten things up. Album closer “I’ve Been Up, I’ve Been Down” is precisely how it the title makes it sound, and it does the job with aplomb. Now rewind it to the start.

So, if Royce has had twelve reviews on this site, with each having merited between a 7.5 and 8.5 guaranteed – incredible stats – and he’s one of the best rappers in the world right now, then it’s a fair enough question to ask why not one of those is a “classic” (or rated at least 9.0). Well, there just isn’t a classic feel to his albums – he’s a classic rapper, but not a creator of truly wondrous art. But I don’t think that matters here, or to him. You see, sometimes it’s just good enough for an MC to spit fire until the walls of his lungs collapse, for over a dozen years, consistently burning the microphone. And trust me on this one: “Success Is Certain” is easily one of the best rap albums in 2011 so far. Just on a very simple basis, virtually every single track bangs; the beats and choruses all work overtime; Royce Da 5’9″ is a well rounded beast throughout; and it’s similar to the Bad Meets Evil EP in tone, but more expansive in ambition. In other words, you need to pick this album up.