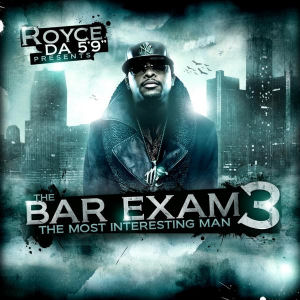 Ryan Montgomery is best known as real life rapper Royce Da 5’9″ but judging by the first skit of “Bar Exam 3” he’d also like to be known as the fictional character portayed by Jonathan Goldsmith for Dos Equis: “The Most Interesting Man in the World.” You’ve probably seen the commercials on TV or seen his cardboard cutout at your favorite pub, but if you’re unfamiliar with this suave senior citizen here are a few of the braggadocious claims about him from the opening track:

“He is the only man to ever ace a Rorschach test. Every time he goes for a swim, dolphins appear. Alien abductors have asked him, to probe THEM. If he were to give you directions, you’d never get lost, and you’d arrive at least five minutes early. His legend precedes him, the way lightning precedes thunder.”

Does Royce Five Nine qualify as this interesting? Well he’s right up there. There aren’t many rap artists who would have the cajones to cross both Dr. Dre and Eminem then increase his legend with a pro-Detroit “Rock City” album featuring production by DJ Premier – and that was the EARLY part of his career. Since then in the last decade he’s dropped a dozen albums on and offline including the self-titled hip-hop supergroup classic “Slaughterhouse.” He’s been in and out of jail, he’s been in and out of feuds with Eminem’s D12 crew, he’s been proclaimed rap music’s savior, he’s never not quotable. In fact when it comes to punchlines Royce stands toe to toe with the likes of Eminem and Skillz and isn’t afraid to be politically incorrect about it: “You stupider than Muslims lookin for gifts on Christmas” is one of the NICER things he says when he’s “On Fire.” There’s nothing apologetic about Royce on “Bar Exam 3” – the man wrote flows to samples of Jon Lajoie’s “E=MC Vagina” after all:

“I know you gazin at the words I text
I ain’t a virgin, your wife ain’t the first bird I pecked
She ain’t per-fect, she per-plexed, she can’t quite think
Your baby girl ain’t right like birth defects
My religion is god body gynecology, I work with sex
Feelin no pain like Percocets
Sellin syrup and wet in church and sweat
You herb niggaz got me twisted like cursive text
Nigga I cling to her, I’ll give her hella smoke
I’ll sing to her, I’ll tell her hella jokes like:
‘Why did my penis cross the road? To get to the other vagina'”

If you’re offended then you probably shouldn’t be reading this review or listening to a Royce Da 5’9″ album, but quite frankly this song is only made funnier by the loud DMX samples yelling “WHAT?!” and “C’MON!” There are some seriously hard hip-hop tracks too though, such as “Nobody Fucking With Us” featuring Bun B and his Slaughterhouse compatriots:

Bun B: “And they ain’t sayin no names so I gotta say it myself
I’m finger fuckin this game so you gotta play with yourself
Don’t pull a K off the shelf, or pull a strap out the stash
I ain’t gotta draw the pistol, I will chop at yo’ ass
I just let the hands of God toe-tap on you fast
Leave you mashed like potatoes on the top of the grass
Call the coppers to catch me and they’ll just tell you to drop it
I’ll find you sooner or later, and they can’t do shit to stop it
Got that thang and I’ma pop it like a bubble on the double
I am trouble in the flesh, you can’t see me with the Hubble”

Joe Budden: “Switch my demeanor up I’m, off my 380 shit
My, future’s bright, stars is by my head, baby shit
Make me sick, what you eat don’t make me shit
Found out the reason they hate me is my God-like presence, must be athiest
While all of the frauds in rap is talkin swag put a fork in that
Slaughter’s back, listen nigga I got houses all across the map
Even got a Boston pad, got this bitch from Boston bad
Well put her in a wrestlin move, but I heard she got that +Boston Crab+”

“Bar Exam 3” is a mixture of original beats and freestyles over samples such as OutKast’s “Bombs Over Baghdad” and B.o.B’s “Airplanes.” As such it’s hard to evaluate this lengthy internet mixtape (27 tracks, nearly 90 minutes long) fairly in terms of music production, but it IS safe to say that he’s not picking whack tracks to flow over either way. Royce has been a highly skilled verbal pugilist for almost 15 years now, and he only seems to get better with age. He’s not the type of rapper you’ll hear sucking wind just to get from one bar to the next. He’s not someone who will try to cram a thousand syllables into a sentence and run all over the beat, unable to start the next line on time. He even proves he can do the AutoTune singing just as well as Drake on his own version of “Forever”:

Last name Voorhees, first name Jason
Like a loaded pistol boy I ain’t nuttin to play with
You don’t want no problems, that drama be too horrendous
Fuck you and your feelings, your momma to who offended
Pimpin ain’t easy, but bitch I’m in the buildin
I’m the smack man I got a backhand, like Serena Williams
He hungry like them Africans on the TV askin feed the children
even though he be eatin like he’s Sicilian
I sweat brilliance, I shit genius
You on fire ’til I come by you and extinguish”

At the end of the day it’s fair to say that while neither Jonathan Goldsmith or Ryan Montgomery are “The Most Interesting Man in the World,” I’d definitely crack open a Dos Equis for Royce Five Nine and hand it to him any time he likes. He’s a ruthless freestyler, an equal opportunity disser, and when he’s not making jokes he’s making rap songs featuring his energetic yet carmel coated vocal tones that flow almost effortlessly. A mixtape like this has only one downside – it makes you want even more. Here’s looking forward to the next official Royce Da 5’9″ album.