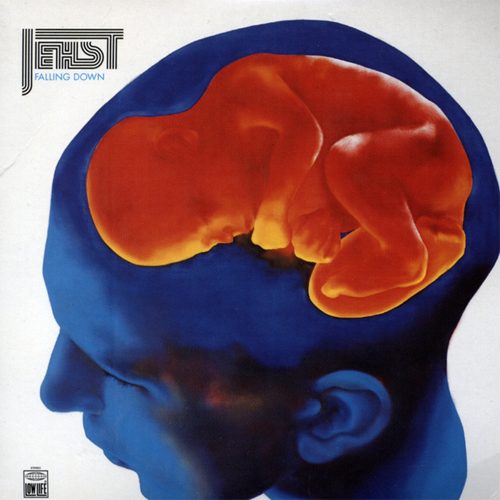 Hot on the heels of his “The Return of the Drifter”, Jehst was striking while the iron was hot in a year of creative brilliance from some of his fellow British artists. Despite the fact that most of the country’s chart-topping hits were American-made, plenty of success was generated at home (albeit via rock, pop, and dance music) with Dido, Radiohead, Blur, Massive Attack, and Robbie Williams all occupying the #1 album slots throughout 2003. Though it wasn’t a commercial smash, Dizzee Rascal’s “Boy in Da Corner” blew critical minds and achieved the first piece of American recognition for the UK’s burgeoning grime scene. In addition to taking home the Mercury Prize at age 18, Dizzee was getting plugged in Rolling Stone, Entertainment Weekly, Spin, and Pitchfork.

Less than four months later, in the midst of new international intrigue about his scene, Jehst dropped his sophomore LP “Falling Down.” If his previous work exemplified life in the boonies, this music sounds like Jehst’s adjustment to the big city – and it sounds like it’s been depressing and angering the fuck out of him. Where “Return of the Drifter”‘s downtrodden descriptions of the country were more observational and emotionally detached, the aggressiveness is amped up tenfold here.

The music itself sounds as clean and streamlined as a train car on the Northern line of the London Underground, with the dirty boom-bap of Jehst’s previous work being supplanted by sanitized sampling and a darker, more brooding sense of foreboding. The work’s also bolstered by a larger production lineup: Lewis Parker, L.G., AM, Apollo, and Cee Why all contribute to the music, and though the production loses the cohesion that came with his last effort, Jehst is left to focus on what he does best – write captivating, picturesque rhymes to provide the listener with the perfect frame of reference for his music. Parker and LG end up with the most impressive beats on the record in “Brimstone Rock” and “Falling Down,” respectively, with the former being a slick, spy movie mid-tempo groove, and the latter drowning in a beautiful wailing vocal sample that perfectly fits the overarching theme of the album’s second half – despair and depression in London Town.

While Jehst’s writing would eventually earn him comparisons to Eminem, the resemblance stops at their skin tone and heavy reliance on multisyllabic rhyme schemes. Whereas Em’s content was more outrageous and scatterbrained, Jehst’s is more direct and succinct, especially when at its most political or introspective points. Standouts include the title track, as well as “China Shop Taurus,” where Jehst shines over Lewis Parker’s soaring horns:

“The sun sets over cityscape silhouettes
Bright lights flicker cigarette smoke pirouettes
It’s the addictive kiss of death in effect
I’m a little stressed spittin’ liquor breath introspect
[…]
BNP berserkers bent on murders
Teens tagging for a sense of purpose
Streets is tense and nervous
So bait is bound to tempt the serpents
Appetite, parasite paradise
Po-lice patronise, lappin’ up a pack of lies
Macho guys turn hermaphrodite by candlelight
Still they wanna scandalise mine cos’ I spit rhyme
I’m tryin’ to scrape the paper and escape quick time
Get yours, utilise your get out clause
Outlaws on course for the great outdoors
I’m way out like Cheech Wizard
Keeping warm in the winter blizzard
Banging my head like Lynard Skynard
I’m having nightmares I’m naked in my ground floor flat
Gripping a baseball bat
With the back door open to night-time predators
Crack-heads highlight heaven gone wrong
Watching back street revellers
Revelation of the Devil’s messed up messengers
Sin is effortless, yet affecting us”

His moments of lyrical brilliance also come via the Muhammad Ali-sampling “Manimals,” and on the intro, “Liquor Soaked Sentiments,” where he constructs a brief, lofty autobiography over one of the album’s best beats. The album’s highlight, however, might be “Run Hard,” the only song from the album to receive visual treatment. Everything is there – flow, metaphor, imagery, and a kitana-sharp wordplay:

“It’s the million militant picture paintin, quick debatin’
I hit terrain my trainers grip the pavin’
The city’s depraved decayed, quick to cave in
I kick the greatest game, pick up the pace
Shake the cage, rattle bars, we bare battle scars
Fresh blood out the abbatoir
Avant Garde rappers are ready for champagne and caviar
I stay camouflaged armed with a travel card (travel unchartered paths)
Pass the parcel, I’m partial to parsley, puff it like Bob Marley
Charged without charlie, chalk the score up
Babylon upon us better board the door up
Dancefloors are torn up we tourin’ Europe
Warlords secure, fuck Tora Bora caves I fornicate with hate
Make love to the break
Each verse a verbal earthquake make the world celebrate my birthday
Sick in the worst way, wastin’ away waitin’ for first aid
I break bread with the first ape
To walk upright and talk just like a drunk on a rough night (’nuff strife)
Queens sellin’ themselves at cut price
Open like butterfly knives it’s not nice I rock mics
Duppy put rock in their pipes
Deprived puppies keep barkin’, blockin’ my light
Yap yappin’ at my ankles
I work so many angles, so my jeans jangle like bangles
I manhandle ample stress, spark bless, then I blow out the candles
Get sweet dreams”

One of the few things holding this album back is the guest list: apart from Klashnekoff and Lewis Parker’s guest verses on “Give It Here” (where they both have nice appearances but can’t really keep up too well with Jehst), the contributions are pretty forgettable. It’s difficult to remain on par with such a talented wordsmith, but Usmaan, Sundragon, Asaviour, and Diablo don’t even come within a half-mile of the album’s main star. One of the few things that also could have carried over from “Return of the Drifter” is the length of the album – a few of the songs add very little to the final product (“Citizen Smif” could’ve been a b-side or white label release, and the “Apollo Skit” is a tad bit grating and interrupts the early momentum of the record).

However, it’s still a great release. “Falling Down” is similar to some of the best mid-’90s East Coast rap classics due to its cleverness in concept and execution, as well as some deft social commentary and superb attention to craft. In my humble opinion, it’s one of the finest British hip-hop releases of the ’00s, and if you don’t already have it in your collection, you should change that ASAP.