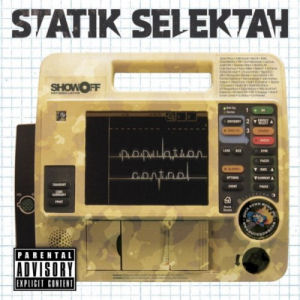 Population control is the concept that the growth rate of the human population can and should be controlled through the use of policies, contraceptives, and other means in order to avoid overpopulation. The reasoning is that since resources such as fresh water and food are finite and limited, the population should be controlled in order to avoid undesirable things such as famine and disease. It’s one of those concepts that sounds better in theory than in practice and causes its fair amount of controversy. This isn’t the forum to discuss the merits of this theory, but a general understanding of the concept is essential to appreciating the title to Statik Selektah’s latest album. In his own words, this album is “a way of saying who is legit from the new generation” since “every person I meet is a rapper, DJ, or makes beats.” Statik’s words ring very true as it seems that nowadays the artists seem to outnumber the fans. This album also marks a new direction for Statik as he has generally limited his albums to established artists. By cosigning the new artists featured here, Statik is essentially marking them as “worthy” of being included in rap’s new generation. The question is, does the man with the golden ear for beats also possess the same golden touch when it comes to emcees?

As talented a producer as he is, this album wouldn’t be nearly as appealing if the emcees were all relatively unknowns, so Statik makes sure to include a fair share of established rappers. The title track features Sean Price and Termanology trading verses, with Sean Price aggressively declaring he’s an “O.G. rapper, you know me, smack the â€“ shit out of any nigga acting like a rapper.” While it’s not Sean Price’s finest lyrical moment, the energy is certainly there. “New York, New York” finds Statik treading a very played out topic, but his jazzy anthem to the big apple works thanks to inspired verses from Saigon and Styles P. Styles P is at his witty best when he declares “and the statue winked at me when I met her.” “You’re Gone” features Talib Kweli and Lil’ Fame calling out fake rappers. “Damn Right” finds Brother Ali and Joell Ortiz reminiscing on hard times when they came up. As far as the newcomers go, the standouts on here tend to be the “rookies” who have already created a good buzz for themselves. Big K.R.I.T. and Freddie Gibbs benefit from some classic southern lines re-worked for the hook on “Play The Game,” though both emcees hold their own with hard verses. Mac Miller sounds too much like Lupe Fiasco on “Groupie Love,” but the soulful crooning by Josh Xantus and mellow beat from Statik give the track plenty of appeal. Action Bronson also evokes memories of another rapper as he sounds a lot like Ghostface Killah on “Never a Dull Moment,” but that’s not necessarily a bad thing. “They Don’t Know” gives us the unique and fresh combination of Atlanta’s Pill and Lawrence’s Reks trading stories of growing up in the ghetto over a bass heavy, dub inspired beat. Smoke Dza drops a decent collection of one liners over a dark, eerie beat on “Harlem Nights.”

Chances are most hip-hop fans are familiar with the names mentioned so far, but “Population Control” also features plenty of unfamiliar names. “Sam Jack” features XV, Jon Connor, and Daytona bragging about “feeling like Samuel L. Jackson” and declaring it’s “time to get it cracking motherfucker.” The concept is on point and the horns on the beat provide some energy. Lines like “pockets deeper than Uncle Phil” and “the boy fresh to death, like they drowned me in downy” stand out. “Down” with Push! Montana, LEP Bogus Boys, and Ea$y Money suffers from a beat that consists of little more than a repeating vocal sample and drum pattern. The emcees themselves spit with a confident urgency that almost masks the beat’s shortcomings. “Smoke On” and “The High Life” are both weed smoking anthems and their appearance back to back on the album does little to help any of the emcees stand out as original. Dom Kennedy on “Smoke On” sounds a bit like Curren$y, so he might appeal to fans of the NO spitter. Kali, GameBoi, and Chris Webby do little other than spew generic brags over one of the album’s weaker beats on “The High Life.” Perhaps the best out of the “newcomers” is Lecrae, someone who is not new at all. In fact, the Christian rapper has quite a following and plenty of albums, but chances are that “regular” hip-hop fans haven’t peeped the man since anything overtly religious usually scares them off. Featured on “Live & Let Live,” Lecrae displays his crisp flow and clever lyrics.

Overall, “Population Control” has mixed results. The album’s strongest songs tend to be the ones with the most well known rappers. That is not to say the newcomers are necessarily at fault, as it sounds like Statik’s best beats tend to be featured on the tracks with established veterans or rookies with a buzz. The newcomers themselves tend to all fall in the category of solid rappers with clever lyrics, but little in the form of original or unique flows or deliveries. It’s not a bad thing and certainly a description that could be applied to Reks and Termanology, two of Statik’s biggest collaborators, but Statik’s decision to feature multiple rappers on every single song hinders the ability of any one individual to stand out. Basically, this album is a nice collection of songs with good to great beats throughout. While you’ll likely gravitate towards those artists you’re already familiar with, most of the new emcees bring enough hunger and energy to avoid the skip button.