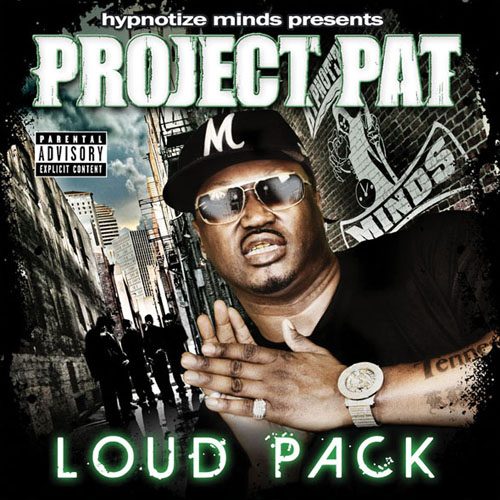 The lack of hardcore rap found in mainstream and even hip-hop and R&B radio stations has undoubtedly been a trend occurring within the last few years. If you take a look at the Billboard Hot 100 chart for this week, only five songs on the entire list could be categorized as hardcore hip-hop tunes. Most of these songs feature Lil Wayne on them as either the main or featured artist. Unsurprisingly, even Weezy’s top hit on the charts is the saccharine “How To Love.” Like it or not, hip-hop has certainly changed with the times. In today’s world, it is not unusual to see a country singer like Taylor Swift rap a Nicki Minaj tune for a radio interview or an actress such as Anne Hathaway spitting a freestyle on the late-night talk show Conan.

Unlike many of his hip-hop peers, Project Pat seems to be one of the few artists unwilling to change his trademark style and adapt with the times. With the July 2011 release of “Loud Pack,” Pat sticks with the street-oriented lyrics and Hypnotize Minds sound that made him popular since the mid-1990s as an affiliate of Three 6 Mafia. With eight studio albums under his belt, Pat has paid dues as a solo artist even though collaborations with Three 6 Mafia like “Sippin’ On Some Syrup” and “Poppin’ My Collar Remix” have given him the most exposure and put him in the international spotlight.

For the most part, “Loud Pack” is a pretty entertaining album. On the record, Project Pat refuses to compromise his street credibility by sticking with subjects he knows best: hustling, selling dope, robbing and killing his enemies in a variety of disturbing ways. Tracks like “Bloodhound,” “I Play Dope Boy” and “I Ain’t Got Beef” work best since they allow Pat’s storytelling abilities to be pushed to the forefront. “Bloodhound” features a dramatic and pulsating beat with speedy high hats and punchy drums. The Memphis, Tennessee rapper’s goal is clearly stacking as much cash as he can by any means necessary:

“Gotta check it, body specin’
Get the ring cut his pinky
Loosey lip or sinkin’ ship
Those choppers shooting like a tankin’
Bout it bout like a rasta
Smoking purp, eating pasta
Late dippin’, caught you slippin’
Come on down imma pump ya
Arm & Hammer baking soda
Measure grams, quick to quote it
Cook a cakey off the flakey, you can smell the odor
I done showed ya, dolla fold ya, product coming across the border
Doin’ deals, coke and pills, shotty, take it off your shoulder
When I’m jackin’ for the riches, mask and revolving pistols
Bullets flying past your head, dog, you can hear the whistle
Jeepers creepers use a sleeper, while I’m up on a creeper
Every order that I get is bagged up by my heater”

Though not the most lyrical tune, Project Pat provides enough potent imagery to leave the listener as though they are on the escapade with him. “I Play Dope Boy” features a similar sound to the previous tune and on it Pat raps about selling bogus dope to serve as a distraction, while shooting up and robbing his customers. “I Ain’t Got Beef” is also a standout track with a haunting backdrop and striking drums. This song discusses street ethics as a group of young hustlers were caught selling dope for Pat, but refuse to snitch on him while facing pressure from authorities.

Project Pat’s determination to stick to his trusted formula for “Loud Pack” does backfire on him in some cases. Tracks like “Niggas So Cut Throat” featuring Juicy J and Brisco and “Penitentiary Chances” offer generic beats that seem inferior to the rest of the album. On “Niggas So Cut Throat,” the emcee refuses to talk about the ills of criminal life unlike his featured guests and continues to portray bravado without admitting the ramifications of illegal actions. Similarly, “Penitentiary Chances” lists as many crimes as you can imagine that would land someone in jail, yet Pat fails to name any alternatives to life on the streets.

After thoroughly listening to the album, it is quite commendable that Project Pat was able to craft a cohesive hardcore hip-hop album in an era where the sub-genre is virtually non-existent. Though the subject matter and style of “Loud Pack” can be redundant at times, overall Pat manages to tell engaging and detailed stories about street life with his gruff voice, southern twang and unusual flow. Perhaps he could have changed the pace of the album with more lighthearted tracks like soulful ode to marijuana “Kelly Green,” but after being in the game since the mid-1990s this rap veteran continues with the style he is most comfortable with and knows best.