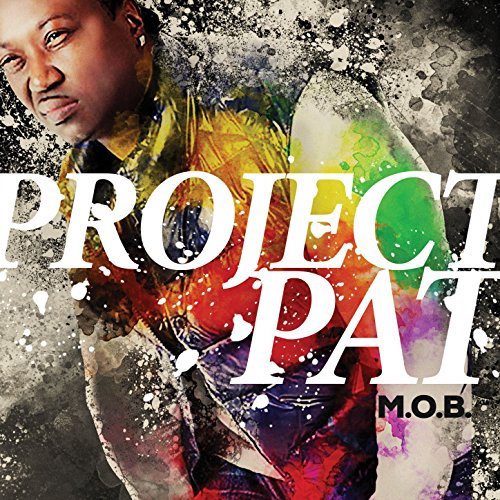 Dating back to his official induction into Three 6 Mafia in 2006 and unofficial membership dating back to the group’s earliest days as Juicy J’s older brother, Patrick “Project Pat” Houston has long been a known factor in the Memphis rap scene. At the time the Mafia started to go from regional to national in recognition and popularity, Pat’s cameos on songs like “Who Got Dem 9’s” and “Sippin’ on Some Syrup” increased his profile to the point that a solo career became a viable option. Over a half dozen albums and many more mixtapes later, Pat can claim certified veteran status not just in Memphis rap but in the hip-hop world at large.

There’s no question that Project Pat is a O.G. and that a new album like “M.O.B.” can be looked at as the latest chapter of an elder statesman with a solid following. Pat’s unique vocal stylings, his tendency to overemphasize certain syllables, to raise or lower his pitch during bars in an exaggerated way makes him easy to imitate and memorable to the listener. On songs like “Money” with his brother J, all of these qualities come together in the best possible way.

Based on the lead single and Pat’s longtime legacy as a rap artist I went into “M.O.B.” with moderately high hopes. Once I heard “Slangin Butta” I started to question why, and I was only two songs into the album. I don’t have liner notes for the review copy I received and that might be for the best, because I’d want to NOT thank the producer of this track for an uninspired beat. Is it “bad” as in unlistenable? No. There’s nothing to recommend about it though, and the insipid chorus only makes one want to pay attention to it more, only to find there’s not a enough of a melody or a hard driving beat to distract you. It’s too generic of a song for a rapper with the charisma of Pat, and one feels he wasn’t motivated by hearing it to write anything special.

That’s a feeling you get frequently while listening to “M.O.B.” The backdrops seem excessively simplistic, relying on a pattern of varying between 2-3 individual notes in a familiar yet overused “spooky” Memphis style, and there isn’t enough thump to the drums or pound to the bass to make up for it. One of the things I’ve always enjoyed about Three 6 Mafia albums over the years is how excellent production could elevate even banal topics to create rap classics. Mafia songs would pound the S–T out of your speakers at home or in the whip. Songs like “Extortion Game” take the opposite approach, and you start noticing cornball lines like “I’m masked up like Batman and I’m +robbin+” too often.

There are still times on “M.O.B.” when the music and Pat’s personality shine through. His sing-song delivery on “Very Paranoid” and the church bell-esque sounds give a classic Hypnotize Minds quality to the track. “We Dem Ones” has some of Pat’s most overly dramatic vocal inflections, to the point fans will love it and anybody else won’t be able to stand it, but for me at least it works. Pat is often as his best when collaborating with other artists and “O’s” featuring Young Dolph is an ideal example of such a joint effort bringing out the “Pat-tahhh” at his best.

If there were more songs like this one and “Money” then it would be easier to file “M.O.B.” into Pat’s catalogue as another certified Memphis banger. The problem is that songs like “Wit the Shii” and the overly AutoTuned sounding “A Real One Will” don’t suit Pat at all. Instead of accentuating Pat’s positives they spotlight his negatives, and it becomes harder to ignore simplistic rhyme schemes and silly lines like “I always remember, like a elephant/you lame n—az in the past are irrelevant.” It’s not that I don’t still respect Pat as a Memphis O.G. – nothing on “M.O.B.” can change that. It does make me think that he wasn’t as highly motivated on this album as some of his previous efforts, and with so many friends and colleagues passing away (Lord Infamous, Koopsta Knicca) in recent years that’s understandable. I hope he finds the spark he needs on his next album and collaborates a little more with the Mafia. They can get him where he needs to be.