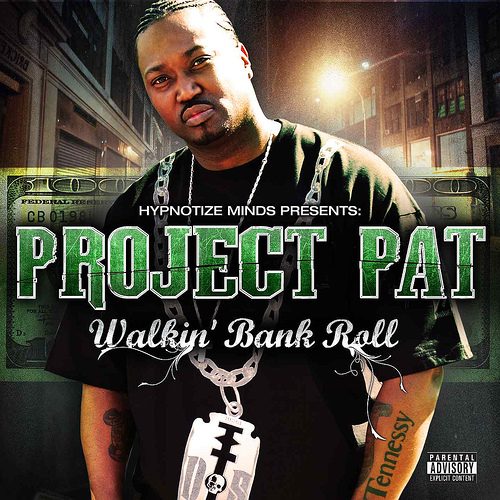 With his “Tenessy” tattoo on his left forearm, a twist on the Hennessy cognac brand, Project Pat still represents his hometown of Memphis regardless of the complicated journey he has gone through up until now. Ever since he has surfaced as one of the top break out rap artists from Memphis in the ’90s, Project Pat has made a name for himself. As a close affiliate to Three 6 Mafia because of his brother Juicy J as a core member of the group, Project Pat has been featured as a guest on many tracks, most notably for the hit song “Sippin on Some Syrup” in 2000 and was a star on MTV’s “Adventures in Hollyhood” with them.

Although never an official member of Three 6 Mafia, Project Pat took it upon himself to release solo hits such as “Chickenhead,” but soon ran into trouble with the law and was imprisoned for four years at the height of his career. After his release, Project Pat made the effort to get back into the game with “Crook By the Book: The Fed Story.” Although the album fell short, Project Pat made changes this year and joined the Koch Records label while releasing his newest album “Walkin’ Bank Roll.”

Project Pat commands a level of respect throughout “Walkin’ Bank Roll” as he attempts to reiterate the importance of his integrity in the streets, a common theme seen many times before. In the opening track, “Rubberband Me,” Project Pat boasts about his substantial amount of money as he says, “I’m a walkin’ bank roll, you can rubberband me.” Was it witty to use a metaphor about his wad of cash flow or just another way to flaunt his existence? As seen from the album’s title, “Walkin’ Bank Roll” is full of braggadocios examples including rolling in his ride in “Wagon Wheels” and being able to have the funds for best in “Good Weed.”

The glamorization for the use of blow in “Powder” reveals Project Pat’s infatuation to get high as he takes pride in robbing and pillaging the streets just for one fix. As if we didn’t have enough already, “Finna Start Robbin'” is just a repeat of the previous track that goes into detail once again about finding it necessary to steal from people when you can’t sell drugs any longer.

To further validate who he has become despite the envy arising from opposing sides, Project Pat shows where his inspiration comes from in “Motivated” featuring Will Wesson. Project Pat takes it upon himself to provide an introduction for “Motivated” as he offers a message to “all that hated on the real” as he says,

“The truth shall survive you know what I’m saying
It’s like this right here man
I mean, you’re hating out here man
but you need to get up on to something you know what I’m saying
I mean, you know, good always overcomes evil
and to all real guys out here just handle your business
All my brothers brown, black, white, all across America…
All you got to do man is put God first and you shall shine
Word to the wise and to the land”

At last straying away from the repetitive theme of drugs and money, Project Pat comes back on a positive note to reinforce his own optimism as an artist. With its faint chimes and claps in the background, Project Pat makes it known in the chorus that he is “motivated by the haters, hater hate on hate on.” Electric guitars and bass permeate through “Hate My Swag” as Project Pat directs his lyricism to the resentful.

“See You Fall” is yet another track that addresses those who have attempted to hinder and obstruct his triumph as a rapper or as Project Pat refers to the individuals as “trying to throw a banana peel in front of you; they want to see you fall not ball.” Soft piano keys mixed with claps and a hard bass makes “See You Fall” a standout track with its creative beat and lyricism.

Amidst the drugs, money, and haters, Project Pat still has room in “Walkin’ Bank Roll” to rhyme about women, after all, bank roll and women come hand in hand, right? With a hilarious skit to introduce “Hit It,” Project Pat gets a call from one of his ladies as he explains to her that he wants to “hit it from the back” and that he hopes that she doesn’t have a weave because he’s a “skeeter.” The track enlists the help of female vocals who tells Project Pat, “You can hit it from the back, punish me, punish me.” I think this one’s pretty self-explanatory.

The album’s first single, “Don’t Call Me No More” features Three 6 Mafia and even reminds us in the first line of the track that he has “the number one ring tone!” In this club bumping track, Project Pat makes it known that he is fed up with his lady as he says,

“What you textin’ me for, 4AM in the night
And you knowin’ that we through, need some wood in your life?
Don’t be booty callin’ me, you can keep yo legs closed
Never get this thing again, or yo coochie I’ll throw
Used to be a glamour queen ’cause I kept you with some money
I done cut yo water off, now you like a dust bunny
Hoody Hoody hood rat, nuck yo booty real fat
I’m in love with a stripper, let me hit it from the back”

Although Project Pat’s “Walkin’ Bank Roll” doesn’t conform to mainstream music as he exudes his own southern style and flair, it still follows the overused themes that many conventional rap albums pursue. Aside from the couple of standout tracks in “Walkin’ Bank Roll,” Project Pat’s vision of an innovative album with lyrical domination falls short. The lack of variety throughout the album and unnecessary Project Pat intro that commences every track attests the monotony as it proves to be nothing more than a simplistic album with a reminiscent Three 6 Mafia finesse. If anything, at least I enjoyed “Adventures in Hollyhood.”