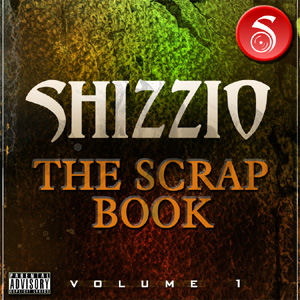 Shizzio :: The Scrap Book, Volume I

An eclectic list, to say the least. But effectively reflecting the range of hip-hop and rap’s influence on the UK music scene. Meanwhile, a big online encyclopedia makes the strange claim that of all the local variations of rap and hip-hop on the planet ‘none are as similar as are the British and the US forms.’ While there may be some similarities, there are also many differences that are far more crucial to such a comparison. For instance, nowhere else produced these musical styles more significant – and successful – offspring than in the UK, as evidenced by the list above (which is far from conclusive). With the likes of Massive Attack and The Streets getting most of the attention, however, it was sometimes hard for single rappers to get heard. That seems to have changed in recent years, with a music industry suddenly bent on creating domestic rap stars (after a long period of neglect).

Shizzio, if he ever gets there, will be quick to tell you that he’s done it all by himself. But he’s also not above acknowledging factors beneficial to his career, such as the BBC’s Asian Network. Shizzio is of Pakistani descent, which becomes appparent on various occasions on his free mixtape “The Scrap Book, Volume I.” He lobbies for the aforementioned radio station (“Save the Music”), tips his cap to the great late Pakistani singer Nusrat Fateh Ali Khan (“Must Must”), freestyles to tabla drums on BBC Radio 1, jumps on Skepta and Chipmunk’s “Asian Girl,” and counters a series of misguided, racially charged Tweets from Wiley with the vitriolic “Ethnic Banta (Wiley Diss).”

Shizzio is a quick-witted rapper with an equally nimble tongue. He speeds up his flow at will and laces his rhyme with deft imagery and punchlines. He makes the best of these dispositions at the beginning of the tape. “Amp’d Up” is an energized take on Imran Khan’s “Amplifier” that scores with lines like “I don’t train my arms, they work out when I bend the rules” or “Solar panel, I take all the shine.” While the lyrical nastiness of “Like a G6 Freestyle” is almost lost in the flurry of G6-rhymes: “‘Shizzio, please let me slurp on your penis’ / So much kitty-cat – Felix / so much Butt… Head… Beavis – Jesus!”

After the promising opening, however, “The Scrap Book” begins to stumble and tumbles downhill. With “BMF Freestyle” Shizzio embarks on a mission to prove that both he and his country have a little ‘gangsta’ in them, name-checking criminal minds like Dave Courtney and Reggie Kray and comparing himself to your kid’s blue collar hero Bob the Builder – because he “can shift a brick.” Intent to also touch hearts, he raps over Gyptian’s “Hold You” and Iyaz’ “Melody,” songs I’ve been trying to escape from ever since radio first forced them upon me, who get equipped with short Shizzio verses delivered with comical inflections and are included at original running time and even dubbed ‘UK Remix’ as if to suggest that they are in any way official.

In terms of actual song material, there are three versions of “Life’s So hard,” which stresses that “life’s so hard for a Paki when he’s livin’ like a G,” and “Hot Like Me (Demo Version),” all basically second-rate underground rap Shizzio should leave behind pronto. What the self-described “one-man army” should pursue are the aggressive uptempo tracks he crafts with producers Rockswayer and Tigerstyle. “The Scrap Book” is just that, a motley collection of sounds, ideas and identities. A serious deliberation of where he wants to go is definitely in order for Shizzio, or people will begin to misread his name as Schizo. Once he makes up his mind, no matter how he decides to play the ‘Asian’ angle, the UK certainly has the means to accomodate him.