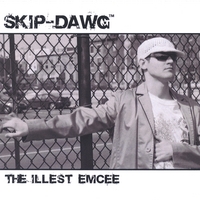 Once I was able to correctly diagnose the mindframe behind the title of the Beastie Boys debut “License to Ill,” I knew not to take the thousands of rap references to being sick and ill literal. Knowing that rap gives a peculiar definition of the term ill, SKIP-DAWG instills the adjective with credibility in a surprising way, referring not to his way with words but to a genetic condition afflicting his lungs that required two major surgeries in 2005, both leading to serious complications. His recovery hopefully completed, he returns with the EP “The Illest Emcee,” following up 2004’s “Everything Changes.”

Things must have gotten quite dramatic, or else SKIP wouldn’t have come up with the intriguing “Cousins Track… (To Say Goodbye).” The song is written from the perspective of an artist who is uncertain if he will still be able to pursue his craft in the future. It addresses family and fans, yet it is particularly written for the sick rapper’s cousin, who becomes SKIP-DAWG’s medium through which he speaks to us. The following is rapped by Furyus, who does an excellent job substituting for SKIP, to the point that you have to really listen to the lyrics to understand what’s going on:

“Looks like my wire end circuitry got criss-crossed
So my retirement’s at hand, I’m sick, dog
It’s up to you now to see this album lift off
So witness Furyus speakin’ for SKIP-DAWG
(…)
Feels like a bat hit my ribs and broke ’em all
I can’t be holdin’ on, what would I be hopin’ on?
I keep rollin’ on while I pass this baton
Because you can and I can’t, you must go on
And who better than my family, I trust you, dog
And to my fans, let ’em know, I love you all
This is my goodbye, just close your eyes
and picture SKIP on this mic one more time
(…)
Lyin’ on my back now wishin’ and longin’
for somethin’ I want but can’t have, this is wrong, man
I’ll be strong, man, I’ll get along, fam
But I’ll never ever be the same at all, man
Don’t stare at me with eyes of pity
but do let me know every day that you’re with me
(…)
I’m not okay, I don’t know someday
if I will walk upright, much less flow someday
(…)
Now the pain is in my way from rockin’ my own tunes
Why give me this thing I feel I was meant to do
then take it all away, man, it’s got me all confused
like givin’ me a gift that I love but can’t use”

Now that he’s got our sympathy, maybe we can cut SKIP-DAWG some slack on his artistic deficiencies. The Haverford, PA resident does what once might have been called pop rap. Although completely on the clean side in terms of content and language, his music is similar to ’90s g-funk-influenced gangsta rap, circa during the transition from replaying funk and soul elements to concocting original compositions. Almost all songs feature a female singer, the majority of them LyNet, who for better or for worse reinforces the amateur appeal of the CD.

While her voice tends to be randomly attached to the tracks, they both harmonize sufficiently on “Come Along Remix,” a bottom-heavy invitation to cruise along. This is mood music on a local level, something a hometown DJ would put into a mix next to the latest national hit, catchy singalongs and understandable lyrics over a contemplative but potent beat. A number of tracks, however, suffer from a too undistinct diction. One of the first lessons a rapper learns is to emphasize the rhymes, something which SKIP either ignores or is not able to follow through due to ongoing health issues. It certainly doesn’t spell the end of SKIP-DAWG’s career, but it becomes a factor when the beats and the lyrics lack in execution as well.

“Times in My Life” is too corny of a love song and opener to make you interested to hear more. The synth strings pop off in all kinds of directions, the female singer finds herself somewhere deep in the background, and the raps are along the lines of:

“Girl, with you I wanna live forever
I hope you’re lovin’ SKIP forever
Cause if you don’t, I’ma flip forever
But if you do, I write you hits forever”

He almost redeems himself with the closing line “Grow with you till the old folks home / kicks us out for the way that we freaked on the flo’,” but only almost. “Here We Go Again” is an aimless message rap that dares to be a little bit political but certainly doesn’t size up to the sampled Chuck D. “In the Place” is a nervous stab at a club track, forcing wanna-be contemporary sounds together with dated “Everybody say ho-o…” chants. The final two tracks, “Loss in Tow” and “This Is for My Dawgs,” both suffer from whiny white rapper vocal syndrome and don’t do much to raise the rapper’s profile.

It is with a heavy heart that I hand out SKIP-DAWG an F. Not just because of his health problems, but also because he still puts together the complete CD package and has his entire discography available for purchase, unlike another indie artist I remember whose object of our review was impossible to obtain days, weeks, and months after the ‘release.’ SKIP-DAWG takes his rap career serious, yet at the same time I also have to note that as a Princeton graduate, former college athlete and aspiring actor who has appeared in films, sitcoms and documentaries ranging from _The Replacements_ to _Forensic Files_, this young man has many other career options besides rapping.