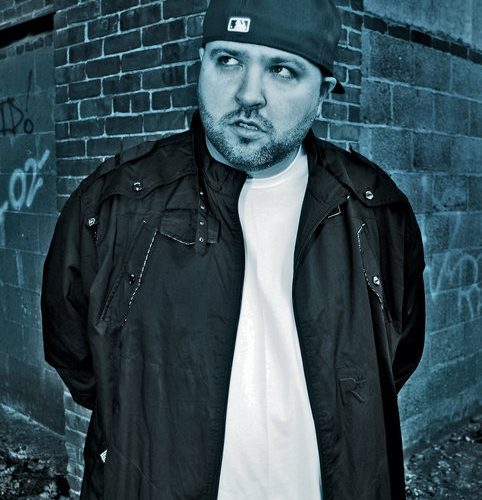 With a musical career that includes his solo work, as well as group projects with La Coka Nostra

, and an acting career that includes one of the year’s biggest box office openers in The Town, Slaine has been extremely busy making a name for himself. Currently putting the finishing touches on a solo album, Slaine sat down with us at RapReviews to discuss his music, working with Ben Affleck and Blake Lively, and why Twitter isn’t always his best friend.

Adam Bernard: Slaine, you have A LOT going on, but I recently on Twitter you said that you’d gladly give up the music and the acting to solely be a father. Is that true, or was that just a random late night thought that you happen to let out… or am I crazy and did I just hallucinate it?

Slaine: Maybe I was hallucinating when I tweeted it. It’s probably not a good thing for someone like me to be able to blurt out anything on my mind at any moment and have the world to be able to see it a second later. I go through my ups and downs. I really demand a lot of myself work-wise whether it’s in the studio, touring, acting, writing, whatever it may be that I need to do. I work myself into exhaustion and sometimes don’t sleep for days at a time. I get down, or homesick. I really like just being at home with my son. At the same time, the fire to create always comes back again, and so the cycle continues. Realistically, though, this is how I support my family, and I don’t know how to do anything else. My wife would much rather me be a 9-5 guy, though, that’s for sure.

AB: Your next musical effort, A World With No Skies, is set to be released in February of next year. This is technically your first official solo album. What do you hope people get out of it?

S: I never really think of other people too much when I’m making music. I obviously hope people understand where it comes from, and are brought into my world. I think all my favorite hip-hop artists have brought me into their world with their music, so that’s the goal. The larger picture was to paint a picture of what my life has been, and is, up until now so it’s documented for my son and is kind of a statement of who I was as a young man.

AB: Content-wise does it match what you rhyme about with the rest of La Coka Nostra, and Special Teamz, or are you looking to go in a different direction as a solo artist?

S: Content wise, I would say it’s a pretty different direction from the groups, or my prior solo mixtapes even. It’s a little closer to my mixtapes just by virtue of it being more personal, but with those mixtapes really being concept albums about my struggles with drugs, specifically cocaine, this covers a lot more ground and is a far more mature version of me with a much broader perspective. Since the time I recorded my last solo stuff I have traveled around the world, put out two albums with two different groups, been in two movies, got married, had a baby, become more financially stable, and I think a little more focused. I’d say this one is a really deep look into my psyche and maybe what made me the way I was. It covers a lot more topically than my previous work.

AB: How do you feel working with so many legendary artists has affected you and your work? What important lessons have you learned from them?

S: Well, I think it has been priceless to work with the greats, and it has made me infinitely better at my craft. I am always pushed to be better by myself and the people I work with. I like to think I push them, too. Now I kind of consider myself a veteran. I have really discovered my own voice more and have learned so many things artistically and business-wise that I know how to direct my own projects and kind of fly on my own with a supreme confidence that I know how to execute my vision, but I have learned how to do everything better from my mentors, from song structure to beat selection, to fighting for every inch of my artistic integrity. The last one may have come more naturally and has been reinforced as kind of a common trait I think all the really good artists have. It is actually pretty difficult to list all the things that I have been taught from these guys. There is a lot, personally and professionally. I have been blessed in that way.

AB: Your acting career has also been going very well. You were most recently in The Town, which received very good reviews and opened at #1. This was the second time you worked under the direction of Ben Affleck, the first time being Gone Baby Gone. What about his directorial style makes you enjoy working with him?

S: I think he has a vision of what he wants overall, but also gives you freedom as an actor to take chances and let things happen naturally to arrive where it’s supposed to be. He is an intense and intelligent guy, but also very personable and easy to talk to. His communication skills are great and he is really in control of his set, but trusts everyone to do their job. I think that his preproduction work is really great, so by the time it’s time to start rolling he knows he has the right people in the places that he needs them.

AB: You played similar roles in both of those films, i.e. a gangster type. What type of roles do you hope to read for in the future?

S: I think these two roles were actually pretty different, even though they were both criminals. In The Town, I play a much more likable kind of wiseass, and in Gone Baby Gone the character had a bit of a harder edge. I do hope to pursue an acting career that will hopefully allow me to play all sorts of roles from lawyers, to cops, to you name it. I like comedy, I like drama, but I can’t front, I do like the gangster shit.

AB: Do you think your music could lead to you being typecast, or do you feel being an underground emcee you might not have the level of visibility that could affect your acting career in such a way?

S: I think that I am a lot smarter than people think. For now, I’ll let them think I am a dummy, that way people will be a lot more surprised when I flip the script on them, but yes, I do think that since mainstream America doesn’t already have a preconceived notion of who I am it’s helped me acclimate myself into the film world, although I think that could change, too. This is my first solo album after all.

AB: Very true. Sticking with your acting career for one more question; Blake Lively was in The Town. You can be honest, I’m only putting this on the internet for the whole world to see, did you holler at her? Do you have her number now? Can you give her mine?

S: Blake is cool, man. We got along really well anytime we have been around each other. I am married, so I didn’t holler at her, plus she has a man, too. Obviously she is a beautiful girl. I think she is going to have a really successful career. She pulled off the Charlestown thing very well, I thought, and she is nothing like that in real life.

AB: You rhyme and you act. Do you partake in any other artistic endeavors that people may not know about?

S: I am looking forward to screen writing and directing in the future, but for now I am pretty busy with the music and acting. I am trying to avoid having a heart attack in my early thirties as it is. In the winter sometimes I spell my name pissing in the snow, though. Does that count?

AB: I’m pretty sure it does. Finally, as a true Bostonian, what makes someone a Masshole?

S: I think we think Boston is at the center of the universe and is the best fuckin place in the world. I know I do at least.