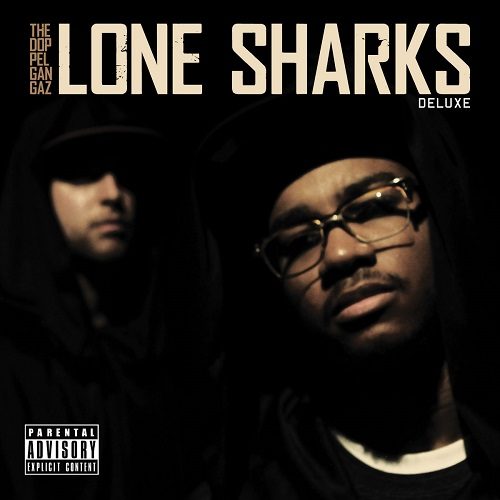 Matter ov Fact and EP, the New York duo known as the Doppelgangaz, are a throwback to mid-90s New York rap in practically every way. In a digital era where press releases, MySpace profiles, and Twitter feeds attempt to bombard us with every detail about rappers’ essences, the Doppelgangaz take pains to maintain their anonymity, hearkening back to a time when underground reputations were cultivated through hand-to-hand passing of recordings, performances, and word-of-mouth. They wear black Tims and hoodies. ‘Nuff said.

Their 2011 LP “Lone Sharks” is much like their prior releases. The two are dead-ringers for a young Mobb Deep and Cella Dwellas. EP is the producer, and the fleeting soul samples, murky basslines, stark, sparse percussion, tenuous piano lines, and instrumental outros sound as if they were taken directly from Havoc’s soundboard. “Suppository,” “NY Bushmen,” “Rap $ Unemployment,” “Dead Already,” and “The Gods,” sound like genuine outtakes from “The Infamous” sessions, and vocally the duo sounds eerily similar to Hav and P. My first impression, though, was that this might be the best album the Dwellas never madeâ€”the dark, somewhat transcendent vibe evokes an otherworldly realm much like 1995’s “Realms ‘N Reality,” and the way their humor contrasts the undeniable gloom of the LP also reminded me of Ug and Phantasm. Heck, they even refer to themselves as “Short Man” and “Height Man,” just as Phantasm used to go by “Tallman.”

“Get Em” is a piece of sheer brilliance, sporting a gorgeous sax sample that absolutely glides over the gritty drum pattern and rumbling bass. The vocals are arranged perfectly such that their laidback, no-nonsense flows shine over the production:

“During the course of the last fiscal year, minimal wealth was earned
And dismal tears were shed for critical health concerns
Of your man, most of them by his own merit
Malnourishment made the nigga have to fry his own ferret
For the protein, he seems so placid
It’s ’cause his diet’s lacking essential amino acids
Plus the niacin is missin’, B
Matter of fact, sufferin’ from every vitamin deficiency
His ailments make him twitch in threes
Sewin’ up all his own cuts so he don’t have to pay the stitchin’ fee”

“Doppel Gospel” has a chilling vocal loop and rich, visual lyricism, while the sunnier “Dumpster Diving” thrives on a lively bassline and charismatic hook. Much of the lyricism serves to flesh out the image they propagateâ€”a pair of gully New Yorkers like Smif-N-Wessun, Mobb Deep, M.O.P., and EPMD before them. But there’s a steady amount of effective dark humor as well. “Wench Rench” hilariously details the undesirability of women with poor hygiene habits, and “Rap $ Unemployment” captures the paradox of being able to “collect rap money and collect unemployment.” “Like What Like Me” is hysterically funny in a way that will unfortunately hit close to home for far too many male listeners:

“Yo somebody up in here must have spiked the iced tea
They say his vision must have been impaired slightly
‘Cause every single peach in here is lookin’ right, see
It don’t matter if the chick got hepatitis type B
Or gingivitis, scabies behind her right knee
Or appendicitis, either depressed or sprightly
Matter of fact, discriminatin’ unlikely
Either black as night or white like Kiera Knightley
Ayo EP, listen and try and follow me
She could be a Christian, or into Scientolo-
Regular checkups, so don’t believe in gynecolo-
If I done messed up, the explanation, my apology
Ayo who down to join the club and be the next honory?
As long as the opposite sex acknowledge
We can overlook the obesity and gonorrhee
The recent fleas, and lack of human decency”

With fifteen tracks clocking in at well under fifty minutes, “Lone Sharks” is a consistent pleasure, with neither individual tracks nor the greater album leaving any space for filler. Although tons of “true school” rappers tend to deliver hackneyed, derivative takes on ’90s sounds, Doppelgangaz’ music is an authentic tribute to the classics of yesteryear, cleverly executed with traces of tongue-in-cheek irony throughout. Anyone who counts “The Infamous,” “Hell on Earth,” or “Realms ‘N Reality” among their collection shouldn’t hesitate to lend an ear to “Lone Sharks,” a real 2011 sleeper.