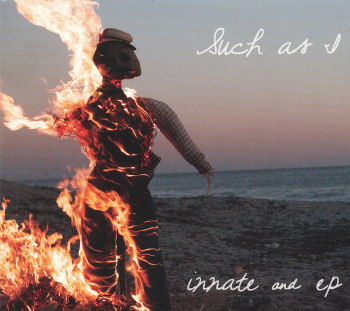 With many rap writers proclaiming 2013 to be a disappointment, I’m already feeling that it has been a good year for hip hop. Of course, I was disappointed with the Pusha T, Drake, Jay-Z and many other “popular” rap records that didn’t quite match their hype, but the beauty of Rap Reviews is we cover ALL rap. Records from Qwel & Maker, Demigodz, Ugly Heroes and even the J. Cole have been catching regular spins, but recently there has been one album refusing to budge from my 2013 bundle of purchases. “Such As I” by Innate & EP is by no means a jaw-dropping record, but it certainly deserves to be heard by more than just underground heads guarding their precious finds. Stumbling across everything on Youtube is probably how many great songs get experienced these days, but I actually stumbled across “Everything” on Youtube, and discovered a potent mix of dusty, ponderous production and two emcees weaving their words across it. The bass-line alone is reason enough to break in to Dr Dre’s cobweb-ridden studio and steal his PERSONAL pair of Beats headphones.

There’s not much on the Internet written about Innate & EP other than the fact they originate from a group called Rock Bottom, and often include live instrumentation in their performances. It’s easy to see how their live show would work so well, given the sounds on “Such As I” are full of energetic riffs, crisp drums and an abundance of keyboards. Production is actually credited to Nate Wolvin throughout, so he could be a name to watch out for as rarely does he fail to get that head slamming.

Innate & EP are similar in style, and equally adept at lyricism. Their work on “Stella” is, well, stellar. What initially feels like another metaphor song about love/women and hip hop being one and the same, is actually about dogs. It’s inspired, and despite a slightly lackluster hook is one of the many highlights. Another is “All I Have”, an honest, very real message about philanthropy from an average, working man’s perspective. but finding that their own life is balanced on the breadline. “Ghetto Slidin” may contain a G-funk style sample but is infinitely more relateable than a Dr Dre track, and is actually about striking up the nerve to talk to a woman. Panpipes show up on the catchy number “Frame of Mind”, an irresistible piano loop on “Around You” and “One Way Train” will have boom bap fiends nodding in approval.

Full of invention and emotion, “Such As I” has the odd hiccup, but are nothing more than minor niggles. “We Rock” is let down by some shoddy hook work, but the ever changing instrumental at least keeps things interesting. I’d like to have seen some more tracks maintaining the raw machismo of “Everything”, as much of the album is decidedly â€˜happy’, but that is a personal preference more than anything. Remarkably, it is hard to find flaws in “Such As I”. Much of the album feels like an understated Macklemore record without the radio-friendly hooks from Ryan Lewis. While it is a great piece of music, the lack of guest-features means that if you’re not a fan of scratchy, white-American voices like Apathy or Grieves, you may struggle to appreciate the message so much. If that isn’t an issue (Apathy and Grieves are both wonderful talents, but I’m aware their voices can divide some) then be prepared for a mature, pure piece of hip hop with some refreshing concepts and endless creativity.

Innate & EP :: Such As I
9Overall Score
Music9
Lyrics9