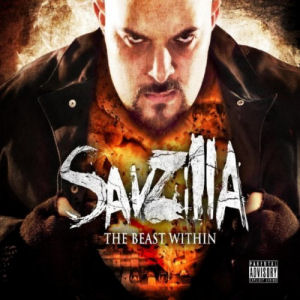 Straight from the 408 (San Jose, CA) comes “The Beast” known as Savzilla. His resume boasts a fairly decent list of people he’s opened for or toured with in his career: Potluck, Esham, Twiztid and ABK among others. Sav dropped this solo album on July 26th through his own Rare Breed imprint, with distribution through 408 Inc., who also get local artists like Playa Raemore national exposure. To be honest I was hoping Rae or his homies Trey C and Tha Critic would have cameos on this album, but Sav rolls with his own crew on “The Beast Within.” There aren’t an abundance of cameos on his CD, but you’ll see Bubba Thug, Massive and Lainey Leone among others drop in for a spell.

Intentionally or not Sav is almost immediately reminiscent of Tech N9ne on the title track of “The Beast Within,” which is the album’s second cut. This isn’t such a bad thing, since Tech has a unique and entertaining flow, and one can only imagine Tech was an inspiration for Sav growing up. The thing that is unexpected about it is that you wouldn’t expect a San Jose rapper to flow like someone from Kansas City. He certainly has all the trademarks – the bars that end with unseen exclamation points, the sudden bursts of rapidly fired words at unexpected moments, singing a few bars at a time when the mood suits him, and a gothic sound which suggests intimate knowledge of humanity’s dark side. The producer Raydan A. enhances these natural proclivities by providing a background of ringing bells, creepy synths, and sounds like a power saw cutting through bones. This is Halloween hip-hop music which Sav describes himself as “filthy dingy darkness, depressing nastiness.”

Sav has that kindred spirit and sound to Tecca Nina at multiple points on “The Beast Within,” but he also offers some different flavors which show his own personality. “Smashed On” cranks it up on a hip-rock level and encourages his listeners to treat the experience like “a mosh pit, and a fist fight, with twin dykes.” Raydan lightens up the mood with a stripped down combination of pianos, bass and drums on “True Colors,” but Sav still seems haunted by his own personal demons:

“So the doc tells me it’s alcohol
Induced depression mixed with anxiety I was bound to fall
And no matter how many people reach out to call
I feel alone, confused, no confidence, high amount withdrawal
Each night I feel the pulse beating deep within me
Gotta build back my strength, my wife needs me
It’s the music that knows I’m starving, so it feeds me…”

That’s another similarity to Tech for Sav – using music as a release for what’s on his mind and as a way to keep his spirit strong. “In My Veins” describes just how deep hip-hop runs through him for this reason, and he amusingly claims “I came out the womb spitting venom like a water moccasin.” That’s another unintentional comparison to Tech, interjecting humor even when in darkness, and one’s forced to note again it’s not such a bad thing to be compared to one of hip-hop’s most underrated and overlooked artists. At other times though he sounds like a rip rock artist in the vein of Kottonmouth Kings, particularly on songs like “Black Eye.”

Sav is a relatively young player in the game just starting to find his way. At times this is an unexpectedly strong solo album for the San Jose native, at other times the beats and rhymes are just average – not bad or unlistenable but not outstanding. At 16 songs and nearly an hour long that’s probably to be expected. With more experience Sav might learn to cut songs like “Nothing You Can Do” or “Stand Down” to strengthen his overall product, saving those songs for free downloads or B-sides – though to be fair they’d be better free shit than a hell of a lot of what you can find on the internet. “The Beast Within” shows both potential and promise, though it’s hard to say at this point whether he’d be better off imitating Tech N9ne even more, or if it would serve him best to develop a flow not so easily comparable.