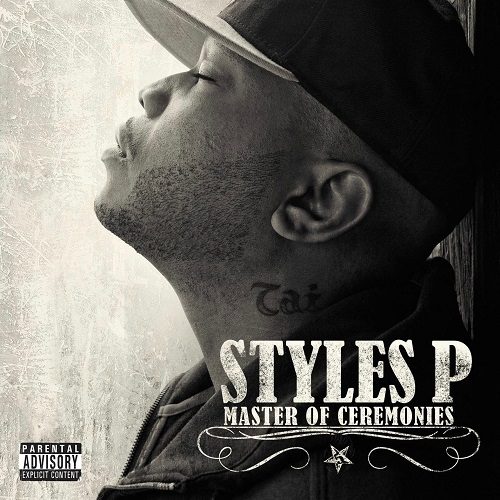 “Cause to me, MC means move the crowd” – Rakim

Long-time Yonkers, New York artist David Styles, better known as Styles P, knows more than what it means to be an emcee. After all it would be hard to have a 15+ year rap career without at least knowing one or two things about what it takes to be a “Master of Ceremonies.” For the man of many monikers (Holiday Styles, S.P. and The Ghost among them) those things can be boiled down to two essential qualities: keep putting out product constantly, and always keep your core fanbase happy. The latter means a Styles P album/mixtape has a few consistent themes each time: I ride a lot, I smoke a lot, and I don’t mess with people who aren’t as G as me. The former means despite only having four official studio albums, the last of which was “Super Gangster (Extraordinary Gentleman),” you can hear a new S.P. LP every year.

2011 means it’s time for The Ghost to materialize in a studio and lay down something his label E1 Music can press, shrinkwrap and ship to stores worldwide. “Master of Ceremonies” is the results of those efforts, a 12 song album coming in just about 90 seconds short of 45 minutes total. That might lead some wary consumers to complain that he and his D-Block affiliates have dropped longer mixtapes, but there’s a quality difference here which can be bottom lined as “you get what you pay for.” You can have a free download any time you want, but can you have a free track produced by Pete Rock with guest vocals by Pharoahe Monch? Not likely. Songs like “Children” prove a studio album was worth the wait:

Styles: “(Children) in the hood seem to die at a young age
Wakes and funerals’ll make it feel like a Sunday
All they talk about, is money and gunplay
Only light they gettin is the one from the sun rays
(Children) no light bulb bright idea
Shame when “kill that nigga” is the right idea
Like a nigga lose his life, every night out here
Kinda hot, but they talk about ice out here”

Another thing Styles has learned over the years from Jadakiss and Sheek Louch is that when you surround yourself with fan favorites, the shine tends to rub off and spread from one emcee to the others. It’s little wonder that “Harsh” is a hit then, complete with a minimal Phonix beat that’s big on the bottom and has Busta Rhymes and Rick Ross performances to make the cypher complete:

Styles: “Root for the villian and shoot with no feelin
Like Audio Two yeah the crew is “Top Billin”
Blowin the dutch in the coupe with no ceilin
Invisible bully like the Gooch when I’m illin
Cash too green, it’s taped to the toilet
Like I’m Michael Corleone in the bathroom scene
Young black Vito, chopped and wrapped kilos
Clap torpedos, stack, Doritos”

Busta: “They say we bad for business cause the coke price dropped
How we flooded and we bubble white ’til it’s white hot (WHAT!)
Pot purchases we chop it up to pieces
’til only the shake is left countin the profit and a bezel (WOOO!!!!)
Eight million dollar yacht, scotch, a little refer
Diamonds so big they call it obnoxious little creature (OH!)
Money to cop original paintings of Mona Lisa
High the way I feel a cloud sittin on my caesar”

Of course what is good for the gander is good for the geese on a Styles P album, so his guests tend to rap about the same topics he does – being a successful street pharmacist slash rap artist slash gun toting hustler. If you’d like to point out there’s no way The Ghost could do most of the things he raps about and not be in prison, it’s (A.) likely you don’t own a copy of “Money, Power & Respect” and (B.) are just going to be the ten thousandth person in line to make that critique. Another lesson of emceeing this “Master of Ceremonies” can offer is that “real” is a trivial word and “reality” is entirely malleable. The champagne and expensive cars lifestyle is unobtainable to the 99% anyway, so if those are the trappings of “keeping it real” in a fake fantasy, exactly what difference would it make? Whether it’s Hollywood or Holly-hood, it’s still meant to be a story to keep the masses entertained.

Now at the brass tacks level, if you want to argue whether or not Styles is a great hip-hop orator, he’s not making top ten of any category other than “Best Rappers From Yonkers,” and that’s not an exceptionally long list to begin with. If you want to argue whether he’s the most charismatic, there’s a charming appeal to his husky East coast flow, but he’s not going to draw you in like a Nas, a J-Live or a Talib Kweli. At times, he even borders on being monotone. If you want to argue he injects more reality into his fantasy than many of his peers, that’s an argument you could win. Though there are clearly songs like “How I Fly” featuring Avery Storm and “Don’t Turn Away” with Pharrell where he enjoys a lavish lifestyle, songs like the Statik Selektah produced “Feelings Gone” are the flipside of the coin, where the ends may not have justified the means after all. What I can tell you about “Masters of Ceremonies” is that while I’m not one, I know one when I see one, and Styles P definitely qualifies. It’s an inoffensive 40+ minutes that won’t change the world, with some escapist fantasy tinged by harsh reality, that will keep the core fans happy.