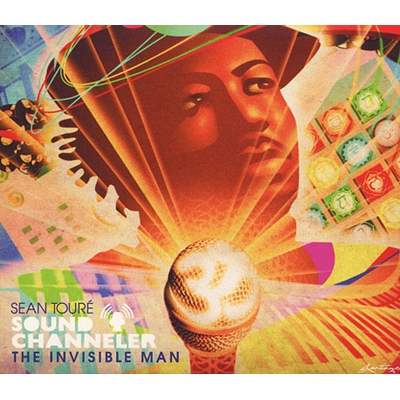 Not shy about styling himself as a hip-hop renaissance man, Sean Toure’ is described as “emcee/producer/musician” in his official bio. If you were to swap “musician” for “deejay” he could even bill himself as a “triple threat” a la J-Live. His bio further goes on to state that from his earliest days breakdancing on the streets of Baltimore, “Sean has quickly developed a reputation as one of Baltimore’s and underground hip-hop’s best [artists].” As a wise man once said though, extraordinary claims require extraordinary proof. If the man who states he’s shared the stage with everyone from Little Brother to A Tribe Called Quest is that ill, his album “Soundchanneler, The Invisible Man” will be that proof.

One thing is certain – “Soundchanneler” is not an insubstantial album. The pre-release copy I received comes in just under the standard limit for a CD at normal compression rates, meaning it’s almost 74 minutes long. Since there are only 17 songs, that means some of them are quite long as well, with 8 clocking in at over 4 minutes and half again of those being over 5. There’s also no shortage of guest stars to be found on “Soundchanneler.” In fact songs WITHOUT a guest are the exception rather than the rule, making Toure’s album more of a compilation and less of a solo project. The only songs that don’t bill a guest of any kind are “For the…” at #2, “Hustle and Grind” at #8 and “Keep It Simple” at #15. There are some pretty notable names among the homies that check in: J. Sands is on “That’s Not Me,” yU cools down “In the Heat of the Night” and both Ab-Rock and Kev Brown are on “A Day in the Life.” You can check a video for the latter song below.

Toure’ seems to be a fairly positive individual, which may comes as a surprise given Baltimore’s oft-grimey reputation (as seen on shows like HBO’s “The Wire”). Nevertheless it’s hard to argue with him when he raps that “Life Is Good,” because his breezy backdrop beat is a production one can easily imagine coming from Evidence or Alchemist. Despite the challenges that come his way, nothing seems to get him down:

“Man I was late again, the boss bustin me out
But he don’t know across the street I’d punch him in his fuckin mouth
Man – but I ain’t goin out like that yo
Cause no cash flow means car get repo’d
No cash flow means no HBO
And no cash flow makes me a broke ass negro yo
Rent’s due and my cash is low
Can’t afford a haircut so now I’m lettin it grow
And let it lock up man let it flow in the wind
And damn it feels good to be the skin I’m in”

The heft and depth of “Soundchanneler” don’t make this the easiest album to digest, but there are still some individually tasty bites. I’m especially partial to the well balanced and harmonious “Move On” featuring Wordsmith, the warped sound fields of posse cut “I.M.A.G.E.” with Substantial, Ms. Stress and Marc Evans, and the somber horns of “My Turn” featurning Minus Nine of Makeshift Deluxe. On the latter the star of this show brags “Toure’ is like an episode of Fear Factor […] cause of the way I eat these whack rappers.” That’s where I have to throw in a few qualifications on the overall presentation. As Toure’ bills himself as being versatile in all areas of creating a rap album from in front of the boards to behind, it strikes me odd that some of his vocals don’t really emerge from the beats, being subsumed by the production levels. To be honest though I’m not sure it would make a difference, because I credit him as a competent enough rapper on the tracks, but the bigger name guests have a tendency to rap circles around him.

The reason triple threat artists like J-Live are such a rarity in hip-hop is quite simple: anybody can be great at one thing, or pretty damn good at two, but by the time you try to master three crafts there’s a distinct possibility at least one of them will suffer. I can’t shake the feeling while listening to “Soundchanneler” that if he focused solely on producing he’d be a well above average producer, but that if he focused solely on being a musician or a lyricist he’d not rise to the cream of the crop. With that in mind I’d like to commend him on his choice of guest artists as they help “Soundchanneler” out a lot, but in the future I’d like to see Sean Toure’ focus on his beats and take things to the next level – instead of sharing the stage with all those big names he might do best to be the man behind them all cashing big checks.