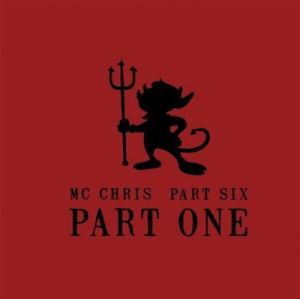 Perhaps you the reader may be as perplexed as I was when looking through the extensiveRapReviews archive of reviews and seeing that out of three EP’s that Part Six Part Two. Why the middle chapter? Why were the start and finish completely left out? I can’t fathom any good reason why. It’s certainly not because the writers for and readers of RR aren’t aware of Chris Ward’s career. In fact when I want to get my nerdcore on, “Eating’s Not Cheating” is still one of my favorite albums. Having recently had the chance to see mc chris on his #RaceWars tour, I decided it was time to rectify this error.

Now as JMB noted on his P6P2 review, the amount of filler on these EP’s is at the very least a nuisance. There’s a three minute long skit called “Dirty Dick” that you don’t need to hear more than once, and perhaps not even that. It’s long been established that Ward gets part of his appeal by having a somewhat unconventional vocal tone – something [adult swim] shows have used for great effect – and another part by using it to rap about either really crass or really geeky topics in equal measure. That’s great when put to a rap beat, but not nearly so much so when listening to two people argue about an abortion for 180 seconds. I’m not kidding. “Deep Space Travel” is a marginally better skit, but that’s because it actually SOUNDS like it belongs to an [adult swim] episode of Aqua Teen Hunger Force.

The joke starts to wear thin by “Rocky’s Robot Butler” though, at which point you realize nearly 10 out of 21 minutes is wasted on this shit. Fortunately the songs sandwiched around the skits mostly (but not completely) make up for the space wasting time filler. Producer Andrew Futral gets the most out of the crass side of Ward’s rhyme material on “Awesome Fucker.” While it may at first seem like it’s a double entendre on how awesome mc chris is, it’s actually a quite literal declaration of his prowess, set to an enjoyably noisy track of electronic distortion and background sounds going “whoaaaaah ohhhhhh.”

“I’m like a boy, in the barn, I’ll fuck you by the horses
I’m like the guy, on the side, that makes girls get divorces
I’m like the coach, that you poke while you’re at tennis practice
I like my balls, in your throat, this is a dirty racket
I like to fuck, in my trunks, yes I prefer jacuzzi
I hear her wail, feel her nails, then I impale her cootie
We make a mess, for the guest, and fuck up the filter
I guess I get, her head wet, but that’s how Jesus built her”

Ward also imagines himself a member of Her Majesty’s Secret Service on “006,” and plays both the villain (named Chang) and the heroic agent in the opening skit before the lyrics kick in. Much like the original James Bond before his politically correct makeover, he’s a sexual dynamo:

“Can’t believe it that deceiving I know I am the shit
If I ain’t emptying my dick, then I empty my clip
So don’t even try to trip cause I come strapped like raver pants
Got an AK-47 and you’re lit for laser tag
I don’t mean to brag, I don’t mean to boast
My ride becomes a boat and we start cruising down the coast
That’s not only how I roll its also how I flow
Bust a cap at the clouds blow a load in your throat”

While the juvenile humor of these songs can be appreciated and the beats are well suited to his unconventional flow, it almost feels like Ward fell into a trap of his own design when listening to “IG-88” that he must make at least one Star Wars song per album. I know “Fett’s Vette” was hugely popular, but after hearing this song and “Zuckuss’ Prius” from P6P2, it occurred to me that Ward feels he has to cater to this audience in a way that could be to his own detriment. It’s not a bad song though, and this is not a bad EP, it’s just that the skits are a damned waste of time and the songs themselves feel misplaced here when a full length album could have served them better. It’s not his best material, nor his worst – it’s just mc chris being mc chris.