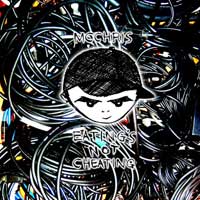 What do the pop music rock band Good Charlotte and the cult hit television show “Aqua Teen Hunger Force” both have in common? The rapper who may be best known as a mutant spider in a baby diaper, the bizzare high-pitched hip-hop phenomenon known as mc chris. That’s not a typo so please don’t send me corrections on it. Chris Ward is so unassuming as a rap artist he would prefer that you NOT capitalize the letters MC in his moniker, since he refuses to consider himself a “real MC” worthy of being considered in the same breath as MC Lyte, MC Ren, or even fellow whiteboy MC Serch. In Ward’s case he seems to wield this mild-mannered apologetic stance as a shield from his fame, because increasing exposure has been unavoidable ever since he lent his voice “Aqua Teen” as a profanity slinging monster whose raps are part of an overly complex pyramid scheme to take over the world.

The truth is that Ward has been slinging his unapologetically fresh and hilarious raps since 2001 and would deserve to be a star with or without Cartoon Network’s help. Good Charlotte’s Joel and Benji Madden clearly recognized this when they signed him to their DC Flag imprint to re-release his album “Eating’s Not Cheating.” The result? He’s a b-boy decoy who pretends not to be cool, but may in fact be fresher than 9 out of 10 rappers in hip-hop today precisely because of that fact. Ward’s helium-inflated voice may make you think of a little kid, but there’s no studio alteration taking place to make him sound weird. Perhaps it’s best to let Ward explain it himself over the drum and organ rap attack of “Stop Time”:

“My voice is just like me, really fuckin high
It’s sad you wanna battle, hope you just upchuck and die
I’m not here to look fly, by dissin on some guy
I’m here to hit on ladies with my motherfuckin rhymes
These are troubled times and we all need to squash the hate
Just like David Silver ‘fore this next commercial break
So before you log on just to motherfuckin flame
You have to understand you missed the point and you are lame
You think this is a game? This ain’t no RPG
mc chris is just a brand homes, that shit is hardly me
Tryin to hustle for the dollar, and get somethin to eat
Pay my bills, buy some games, and perhaps a little weed
Is that too much to ask? Do I seem too defensive?
Pensive over lessons that some fans are double guessin?”

Ward makes the jokes on “Eating’s Not Cheating,” and more often than not he’s the target of his own comedy. The self-deprecating rapper frequently reminds us that he’s a video game player, a misguided mack who has trouble getting dates, and a self-medicating loner who abuses substances to escape from a depressing reality. He’s the guy you would have shoved in a locker in high school without a second thought, but the odd thing is that he’s as bad as the hardest hip-hop poseur without the need to pack a gat. Factor #1 is that he doesn’t dissapoint on the beats. Without fat tracks to flow over the joke and his high-pitched voice might wear thin, but songs like “Rats” swing like any hardcore track the average b-boy might enjoy. Even when Ward’s flow and breath control are impeccable, he still portrays the image of a shy dork who can’t even get a date and posts futile rants about it on the internet:

“Plaid pajama bottoms or plaid pleated skirts
Everything you girls wear makes me stare at the dirt
If I had balls I’d flirt with y’all in study hall
Do the geek talk till your eyes roll back into your skull
But I’m a freak – spelled fr-double-3-k
When you’re walkin my way, with my pockets I play
I can’t say what’s yer name, care to chat for a bit
It’s me Brian, that guy, from that class, Russian Lit?
Care to sit, have a chip, care for some fun dip?
Dostoevsky doesn’t impress me, what you think of that shit?
But I don’t, I just twitch and I itch in my pants
Play my Gameboy Advance until she’s finally walked past
A mad dash to my crib where I get on my blog
InSearchofSpock dot com check it out if you want
That’s the steam blowin scene where I reign supreme
Webster’s my Friendster, I run the message board for Ween
It’s a mental mall for teens, it’s a paradise on earth
But in a way it’s like a curse, faster than a Google search
I just sit here and drink beer while my roommate flirts
at some party, with some hottie who’s all into Fred Durst
It makes my heart burst, and yet I do nothin
Just get on the web and start bitchin and frontin
A dot com curmudgeon, who’s love life is sufferin
It’s the rope or the oven
Or the hope I find love in the end”

Poor mc chris – well, not really. There are plenty of girls who upon hearing these hilarious and heartfelt lyrics would swoon at his feet. Not every woman out there is into a macho b-boy with his pants sagging and twenty pounds of gold around his neck and in his mouth. mc chris is the progenitor of a style often described as “nerdcore” – a mixture of hardcore hip-hop beats with topics that are down to earth and easy to relate to. Everybody who’s going to front on him for being a self-confessed video game addict needs to put down their Madden 2006. All the G’s who think they’re too hardcore for a high-pitched rapper should burn their “Best of Eazy-E” compilations and throw away their DJ Quik records. With fat beats and a relentless ability to mock himself and people who have similarly nerdy pursuits, mc chris breaks down the stereotype of hip-hop machismo and proves there’s room to be funny without using thinly veiled threats to kill rivals. Say it loud, say it proud – “mc chris is the shit,” and he’s an “Illinois boy known to make some noise” on the song “Illy Oi!”:

“Used to love hip-hop now it sucks like ‘roids
I’m here to fill the void lemme hear ya say OIYYY
I’m the type of dude that’ll rap for food
Rhyme real smooth cause I don’t produce
MTV said no so I’m just on Fuse
Everything to gain but nothin to lose
(Yeah, yeah, yeah, yeah, yeah, yeah, yeah, yeah)
Well I’m the baddest MC switchbladin the mic
Playground player, fifth grader for life
Only bling that I wear’s in my baby blue eyes
I keep my bitches on a short leash with a trackin device
My name is mc! I got carcinogen beats
Been compared to Monet, I’ve been compared to Matisse
When I’m not rhymin, or fuckin, I’m lookin for trees
You’re givin hand jobs by the blood bank for a nickel a piece
I bring the jams, like Knotts Berry and Smuckers
Motherfuckers better duck cause I’m on downers and uppers
I got a sack of nutterbutters and a head in the gutter
I waste whack mc’s like they fuelin a Hummer, so c’mon!”

Hip-Hop definitely needs a little levity in these days where everybody is trying to have a bigger crib, better whip and fuck the best supermodel or R&B singer they can hook up with. Ward’s consistantly hilarious as he confesses to have “a panty collection like a Japanese nerd” on “Tractor Beam,” or on “Evergreen” when he says all he wants for Christmas is “some mistletoe all up in this piece/maybe a girl, that’s free of disease/and while I’m thinkin, throw in a couple of G’s.” The biggest challenge for mc chris on this re-release of “Eating’s Not Cheating” will be that some people won’t get the joke, or will think that he is mocking hip-hop – essentially they’ll have the reaction Coolio did to Weird Al Yankovic’s “Amish Paradise.” Chris Ward may be joking but his music is definitely not a joke. Nerdcore is a real genre that’s gaining devotees tired of being forcefed rap cliches of playboys who are more often than not fronting on their record label’s cash and just as broke as Chris is. In the end the two groups have more in common than they think – they both enjoy smoking weed, playing video games, and trying to fuck good looking women – it’s just that mc chris isn’t afraid to admit he likes Star Wars and that he’s jealous of his “Robot Dog”:

“I got an allergy, for every pedigree
So I got myself a robot dog that’s Japanese
But yo, he’s hard to please, he’s always gotta pee
But he never sips a drip this chip is playin me
The way it plays ladies, is such a sight to see
He gets more digits than I could inside my wildest dreams
He plays the hoes instead of playin fetch with me
He sniffs the toes of Tiffany and Stephanie
That brings up Emily, she was my latest squeeze
Robot dog stole that girl right out from under me
Sometimes I wonder why I supply the energy
to my mortal enemy that should be a best friend to me”

With beats from Alchemist or 9th Wonder, everyone would be on mc chris’ jock so quick he’d have to finally admit he gets as much poontang as Wu-Tang. He’d held back a little by the production as a result, but with personality and humor he overcomes these odds and makes even somewhat underwhelming beats like “Variety” and “Boys Don’t Cry” come off more dope, while tracks like “Yacht Birds” and the “Toothpick Spliffs (Remix)” are the unadulterated truth. You won’t get your street cred pulled for listening to “Eating’s Not Cheating,” after all it’s just music, so don’t be afraid of the fact that mc chris won’t capitalize his intials. Whether he thinks he’s worthy of the letters or not, he’s a true Master of Ceremonies in the oldest of old school tradition, not afraid to rap about whatever the fuck he feels like.