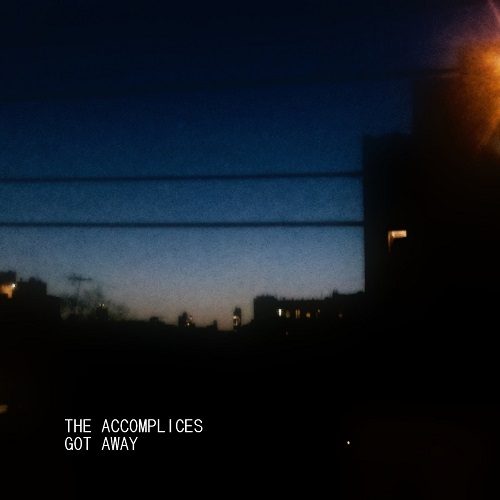 The Accomplices :: Got Away

“Got Away: The EP” is the fruits of a collaborative labor combining production talents of The Jake (from Dover, New Hampshire) and BroadNMarket (from Queens, New York). Neither have been individually reviewed on RR before now, but some of the emcees they collaborate with on this EP have been, not least of which is Trek Life. His song “Turn the Lights Off” is one of the most enjoyable on this short release.

“We got somethin goin on between us
Somethin like a chemistry, both of us can see it
I really can’t explain it but, what I really mean is
I’m on my Jodeci type – uhh, you caught me +Feenin+
Can’t leave you alone, texts on my phone
Showin your concern, makin sure I got home
or wherever I’m goin, and it’s kind of a trip
I’ma, enjoy the ride, see what comes from this”

Trek walks the line between interested lover and obsessed one at times, but reassures us that “I’m prone to dip/if it ever gets strange” to let us know he hasn’t gone overboard. The producers certainly haven’t – Jake and Broad mellow it out on the verses then rock it out with guitars on the chorus, which might seem like too much contrast in print despite the fact it works perfectly on the song. The other songs and emcees on this just over 20 minute EP go from exceeding expectations to leaving listeners somewhat perplexed. Montreal native Malicious definitely sounds like a star in the making on the raucous “Drop,” while Long Island rep Gif doesn’t sound exceptionally blessed as a braggart on “Invoking the Spirit.” Then again the beat he’s rapping on is largely to blame, a mixed up mess that can’t seem to decide whether it’s RZA or Large Professor.

Overall The Accomplices do seem to have a good ear for beats when working together, enough so that one would enjoy instrumental versions of “The Getaway” featuring MaG and “Relax” featuring DeuceZ as much as the rap versions. That’s the biggest drawback to this EP though – when up-and-coming producers are working with up-and-coming rappers, it’s often too hard for both to elevate each other at the same time. The end result is that while more often than not The Accomplices prove themselves worthy to be producing hotness for top names, the mixed bag of talent doesn’t do them or this EP any favors. Since it’s a free download, you won’t hate yourself for giving it a listen, but a purchase would beg for more.