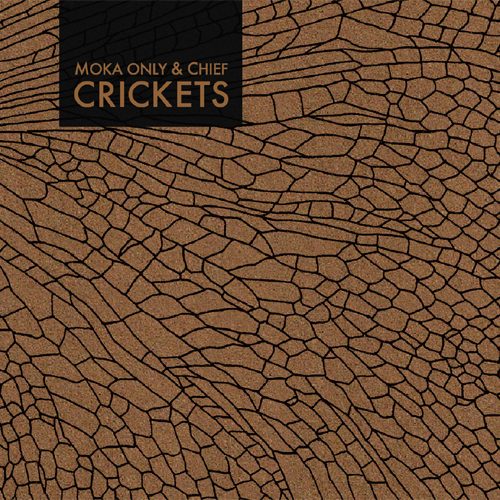 “Crickets” is the culmination of a cooperation that began in 2008. Canada’s Moka Only and Switzerland’s Chief have collaborated before, but this is their first full-length after Chief helped release “Lowdown Suite 2” yet only contributed one beat to it. For Moka Only’s second longplayer on Feelin’ Music, Chief handles the entire production, a fact thankfully acknowledged by the ever productive Moke on “Relief” when he says, “Chief gave me relief from the beat duty.”

Chief knows how to accomodate his guest by serving funky hors-d’oeuvres, jazzy dishes and soulful delights. Compared to Moka’s self-produced albums, the tracks on “Crickets” have the polish of thoroughly produced hip-hop. The arrangements fit, the timing is right, the sound library is stacked with classy tunes. Despite the improvisational nature of Moka Only’s music, the 16 tracks are altogether tight. In return, Moke comes across fresher than on other projects. Still it’s clear from the jump that when two such like-minded spirits meet, they won’t travel too far outside of their common comfort zone.

The contentment of both artists is felt, and in terms of quality their music sounds all the better for it, the rapper’s solid, relaxed flow spinning smoothly “drenched in the Chief sound dimension.” It’s hard not to give in to the neo soul thump of the opening title track, the zen-like centeredness of “Mess Around,” the jazz jam session vibe of “For Always,” the mythological dub backing “Form the Future,” the down-home charm of “Relief,” the etheral yet grounded “In Here,” the combination of strong ’90s drums and elusive vibes of “What to Do,” the sweet ’80s sax that leads “Show,” etc. However, it’s unfair to describe Chief’s beats with just one term when they have so much going on. The subtle but effective use of sung vocals alone is exemplary, as is the quality of the drums.

Lyrically, Torch touches on the usual topics dear to himself. He’s the international artist getting by without the music industry. And that’s… pretty much it. Occasionally he gets a bit delusional about his status (“Everything I do is original and new;” “Re-re-repetion is not one of my attributes”), but eventually his candor and carefreeness win him plenty of cool points. Like when he refers to his music as “weird little shit” that still earns him more money than your local hood star gets. Or when he describes himself as “stubborn like an obstinate horse,” but adds, “Still the horse power get me uphill.”

The short format is his fortÃ©, as evidenced by a fresh one-liner like “I don’t cease and desist, I increase and persist,” or an insightful observation like “The world is of your own design – it’s abstract / but wrap your matter around it and that’s that.” Unfortunately, he doesn’t take the time to think the things on his mind really through, so that his songs remain sketchy besides the few that focus on a specific topic (“For Always” expresses gratitude, “Next Step” highlights his philosophy of perpetual motion). On the level of pure hip-hop vibes, Moka Only is able to evoke comparisons ranging from Common to Curren$y. But he chooses not to go there, not pursue the hint of commercial appeal, and instead lives by that old Big Daddy Kane line “I’m different, so don’t compare me to another.” For Kane it served as a declaration of superiority, for Moke it works as an artistic motto. And that’s also the difference between an MC going down in history as one of the greats and a self-professed “music nerd” content with doing his own thing. Both are legitimate representatives of hip-hop, and all things consisdered, Moka Only seems somehow fit for these times when we all have to lower our expectations.